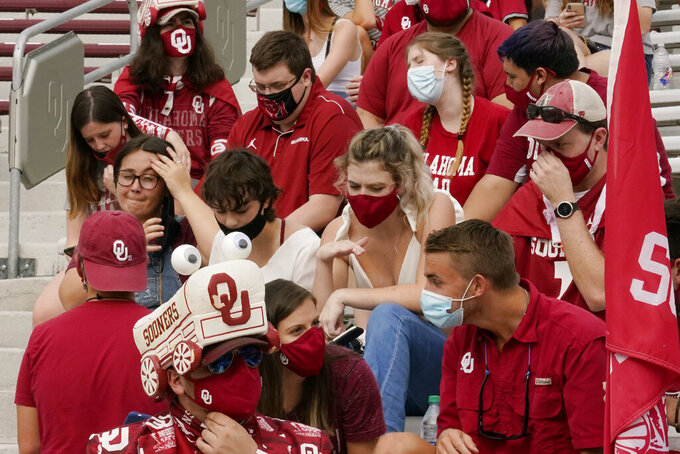 FILE - In this Saturday, Sept. 12, 2020 file photo, fans in the student section are pictured before an NCAA college football game between Missouri State and Oklahoma, in Norman, Okla. To achieve greater compliance with the University of Oklahoma's COVID-19 policies, the university's Athletics Department is announcing additional measures that will be implemented for the next home football game. (AP Photo/Sue Ogrocki, File)

Baylor's season opener against Houston, scheduled less than a week ago, was one of two Bowl Subdivision games postponed Friday — the day before before they were supposed to play.

Florida Atlantic's opener against Georgia Southern was postponed earlier in the day, following the results of FAU's COVID-19 testing Thursday. In both cases, the schools involved said they would try to find make-up dates.

The postponements illustrate the uncertainty surrounding college sports. The number of FBS games postponed or canceled because of COVID-19 issues since Aug. 26 is 16 and the pandemic's impact is being felt in other sports; one of college basketball's premier tournaments is moving from Hawaii to North Carolina and the NCAA delayed the start of the basketball season to Nov. 25.

Athletes are scrambling too: Minnesota star receiver Rashod Bateman has re-joined his team after opting out of the season, and hopes to be able to play when the Big Ten starts in late October. A similar return played out earlier this week at Ohio State.

The Pac-12 could be next to get back in the game. The conference's university presidents met Friday. A statement from the league said the CEO Group had “an informative and productive meeting."

“We plan to reconvene this coming Thursday, Sept. 24 to make a decision regarding possible return to play prior to January 1,” the group said in a statement. "The health and safety of our student-athletes and all those connected to Pac-12 sports will continue to be our number one priority in all of our decision making.”

In putting off its opener, Baylor said it was unable to meet COVID-19 roster thresholds set by the Big 12. The school did not provide specifics on the players or positions affected by the coronavirus or the number of players who were quarantined due to contact tracing; on Monday, it said it had six active cases across its athletic programs and that 23 total cases were being monitored.

Baylor is scheduled to open its Big 12 season next week against Kansas. The Big 12 said that game is still on for now, but Baylor athletic director Mack Rhoades told SicEm365 Radio in Waco, Texas, he had not yet spoken to Kansas athletic director Jeff Long.

“Within this particular position group we can’t take on any more water,” Rhoades said.

The Big 12 said a minimum 53-player roster is necessary to play a game, and must include at least seven offensive linemen, four defensive linemen and one quarterback.

On Friday, the Southeastern Conference released similar thresholds with one key difference. The SEC said it would only count scholarship players among those minimums. The Big 12's minimums include walk-ons.

“We’re heartbroken from this postponement,” said Dave Aranda, the former LSU defensive coordinator still waiting to make his debut as Baylor's coach. “While we’ve been eager to play football this fall, we have all made a commitment to only do so with the highest level of safety and care for our student-athletes."

The game between Baylor and Houston was scheduled only a week ago after the former Southwest Conference rivals both had their original openers put off because of the virus.

Baylor was supposed to play last Saturday against Louisiana Tech, which had widespread COVID-19 positive tests.

Houston was scheduled to play Friday night against Memphis, but the American Athletic Conference postponed that game last weekend after the Tigers had numerous players test positive.

Houston has now had four games postponed or canceled, including one against Washington State originally scheduled for Sept. 12 that was lost when the Pac-12 initially decided to play only conference foes. The Pac-12 subsequently postponed the fall season altogether but is now reconsidering, with a possible late October or early November start.

The Cougars are scheduled to play North Texas next week.

“We’re extremely disappointed for our student-athletes, coaches and staff," Houston AD Chris Pezman said. "They all have consistently done the right thing and worked tirelessly to be prepared for this game.”