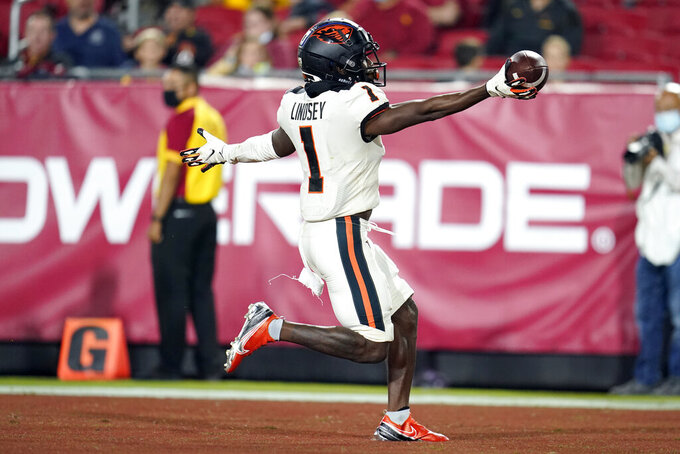 CORVALLIS, Ore. (AP) — As the Oregon State Beavers celebrated their big win at USC, coach Jonathan Smith proclaimed in the locker room: “We ain't done yet.”

Oregon State is currently second in the Pac-12 North standings behind undefeated Oregon. Washington is third.

Beavers coach Jonathan Smith was asked if this season's early success validates what he's been building toward in his fourth season at the helm.

“This is another step in the direction. It’s always good when you go win on the road against good teams. We were able to physically win at the line of scrimmage both offensively and defensively," Smith said. "I think it shows growth, overcoming some adversity, knowing that the game was long and there were moments where they couldn’t let them back in the game, we didn’t.”

Now the Beavers are leery of a letdown against the Huskies.

Washington has won two straight and is coming off a 31-24 overtime victory over California. The team opened the season with a discouraging 13-7 loss to Montana.

“All they’ve done is gotten back to work all season long and we are still continuing to grow and develop,” Lake said. “It’s been really cool to watch guys take their game to another level. We have seen improvement across the board.”

Lake doesn't think the matchup of former assistants adds intrigue to the game, but he added a personal aside.

“I don’t know if you guys know this or not, but my first college game I ever coached, he was the starting quarterback for Oregon State when I was at Eastern Washington. We almost beat them, by the way. I think it was 19-17, missed a field goal right at the end,” Lake said. "That was the year they won the Fiesta Bowl.”

Washington is expected to be without standout tight end Cade Otton for the second straight game due to COVID-19 protocols. Otton did not play against California last week and Lake indicated he did not expect Otton to be available against the Beavers.

With Otton out, Devin Culp stepped in with five catches for 81 yards against California and the Huskies were able to keep their tight ends as a major piece of the passing game.

“We all know what Devin can do, and it has been unfortunate that he’s had some glaring drops over the last couple years,” Lake said. “For him to go out there and not have any drops and make some big-time catches, especially early on in that game to get our offense going and get our offense in rhythm and put some points on the board, was a huge boost not only for him but for our football team.”

Oregon State quarterback Chance Nolan was named the Pac-12 Player of the Week after throwing for 213 yards and four touchdowns in the victory over USC.

Nolan wasn't even the projected starter going into the season. The Beavers had a three-way competition in preseason camp between Nolan, Tristan Gebbia and Sam Noyer.

Gebbia started last year for the Beavers until he was injured and Nolan took over. Noyer transferred to Corvallis after starting for Colorado last year.

Nolan is averaging 211.8 passing yards per game and he shares the lead in the Pac-12 with nine touchdown passes.

Washington cornerback Kyler Gordon is coming off the best game of his career. Gordon had the first two interceptions of his career in the win over Cal. He also had a key fourth-down tackle that forced a turnover on downs and finished with a team-high 10 tackles.

Gordon has been a bit overshadowed by the attention given to teammate Trent McDuffie. But with McDuffie out against Cal, Gordon took advantage of his moment to shine.

“We have football players at corner that are willing to go in there, stick their shoulder in there, make tough, physical tackles. But also, fast and quick enough to cover the fastest receivers in college football,” Lake said. “Those three plays obviously stand out but he had some other awesome plays as well.”