In the Big 12 a running back resurgence led by Hall, Brown 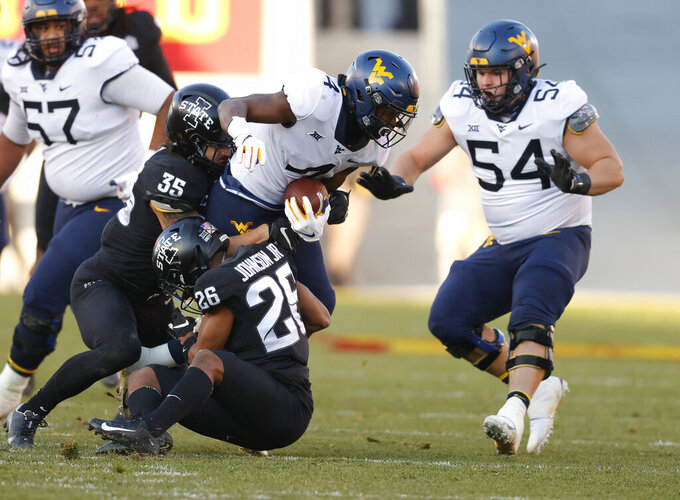 West Virginia running back Leddie Brown, center, runs the ball as he is brought down by Iowa State linebacker Jake Hummel, left, and defensive back Anthony Johnson, bottom, during the first half of an NCAA college football game, Saturday, Dec. 5, 2020, in Ames, Iowa. (AP Photo/Matthew Putney)

Hall has 1,357 yards rushing this season and has been the key component to Iowa State’s run to the Big 12 title game. At West Virginia last week, Hall ended up rushing for 97 yards and a touchdown against one of the nation’s best run defenses, and the Cyclones rolled to a 42-6 victory.

Brown has rushed for 945 yards this season for West Virginia. In his best games, he ran for 195 yards against Kansas and 156 against TCU.

While Oklahoma freshman quarterback Spencer Rattler has been exceptional, the Sooners’ offense came together when running back Rhamondre Stevenson returned from a suspension. He has averaged 95.5 yards rushing in four games and 5.9 yards per carry. He has added 14 catches for 175 yards.

“I think everyone else is just playing a lot better,” Stevenson said days before rushing for 141 yards in a win over Oklahoma State. “I give a lot of credit to the o-line. They work hard every single day in practice. And my peers in that running back room, too -- we’re just anxious to get better every practice, and I think that’s what’s leading to the rise in yards.”

Oklahoma State has been without its top two backs - Hubbard and LD Brown -- the past two games. Dezmon Jackson has stepped in and rushed for 353 yards and four touchdowns in his past two games combined.

Jackson ran for career highs of 235 yards and three touchdowns in a win over Texas Tech in his first start on Nov. 28.

“I saw a guy who was focused and was looking for his opportunity, and he got it,” Oklahoma State offensive coordinator Kasey Dunn said. “We talked about running behind your pads, and he did it. He didn’t dance around.”

Jackson followed that by rushing for 118 yards and a touchdown on 29 carries in a loss to TCU last Saturday.

Kansas State’s Deuce Vaughn was a key to the Wildcats’ hot start. The 5-foot-5 freshman ranks third in the conference with 642 yards rushing and has 25 catches for 434 yards. He broke the school record for yards rushing in a season by a freshman.

Texas Tech’s SaRodorick Thompson has rushed for 610 yards this season, including 133 yards and two touchdowns against Oklahoma State.

Highly touted Texas freshman Bijan Robinson has rushed for 520 yards and averaged 6.8 yards per carry. He ran for 172 yards and three touchdowns on just nine carries last week in a blowout win over Kansas State.

Riley said those backs might get even more action with the season winding down.

“It’s important, I think, especially when you’re talking about winning games in the later months where you may hit a game with inclement weather or whatever the case may be -- when you can run the football, you’ve got so many more opportunities and ways that you can win,” he said.