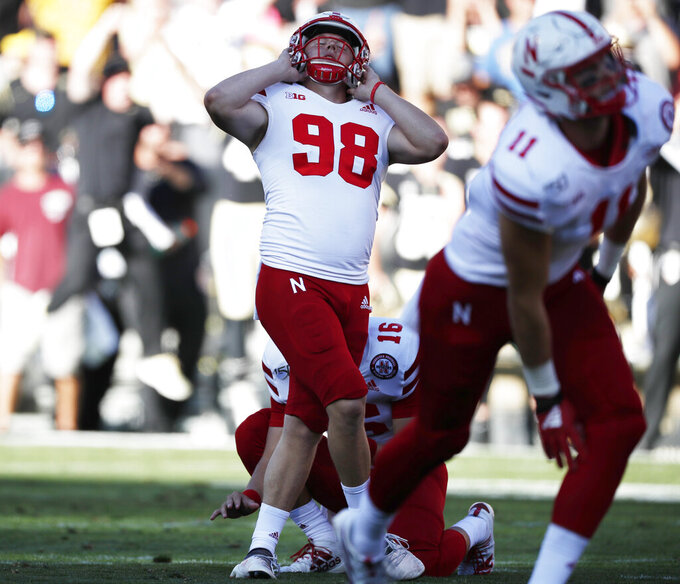 LINCOLN, Neb. (AP) — Scott Frost recalled his parting words to his players just before they left the locker room at halftime with a 17-0 lead against Colorado.

"I said one of two things is going to happen," the Nebraska coach said Monday. "Either we mess around and don't finish this and let this team eventually get back in the game and it gets interesting, or we go out and finish them right now."

What happened Saturday has become all too familiar to the Cornhuskers. Their lead evaporated, and they lost 34-31 in overtime.

The Huskers (1-1), who host Northern Illinois (1-1) this week, have lost after leading in the second half in five of 14 games under Frost. This was Nebraska's biggest blown lead since the Bo Pelini-coached team squandered a 21-3 advantage in the middle of the second quarter against UCLA in 2013.

Coming out of halftime at Colorado, Frost said, his players gave the appearance they were excited about finishing what they started.

But, he added, "I just didn't feel maybe the sense of urgency on the offensive side in the third quarter."

Nebraska still was up 17-7 entering the fourth and 31-24 with under 4 minutes in regulation. Steven Montez drove the Buffaloes 71 yards in 10 plays for the tying touchdown.

Colorado kicked the go-ahead field goal on the first possession of overtime. On Nebraska's series, two runs and a sack left the Huskers with fourth-and-16. The game ended when punter Isaac Armstrong, kicking in place of the injured Barret Pickering, badly missed a 48-yard field goal.

The Huskers dropped to 1-6 in games decided by five points or less under Frost.

"Just keep going. That's all it comes down to," he said. "For whatever reason we throttled down. And that's what happens when you throttle down. You always have to go. But we failed to do that, and that's on us. There can't be a letup for any reason."

Frost said Nebraska has a small margin for error and that it isn't good enough to survive offensive lulls, bad penalties and turnovers. All were factors against the Buffs. The defense also might have been tired in the second half, he said, though he didn't know if the 5,000-foot elevation was a factor.

Linebacker Mohamed Barry said as much as the loss hurt, it can be chalked up as a lesson learned as the Huskers approach their final nonconference game and the Big Ten schedule.

"Nobody's going to care about Colorado," he said, "when we're playing in the Big Ten championship."

NOTES: Starting safety Deontai Williams, injured in the opener against South Alabama, had shoulder surgery and is out for the season. ... Pickering was not listed on the depth chart Monday, but Frost said the kicker is feeling better and is not ruled out for Saturday. ... Northern Illinois beat the Huskers 21-17 in Lincoln two years ago. The Huskies will receive a $920,000 guarantee for this visit.