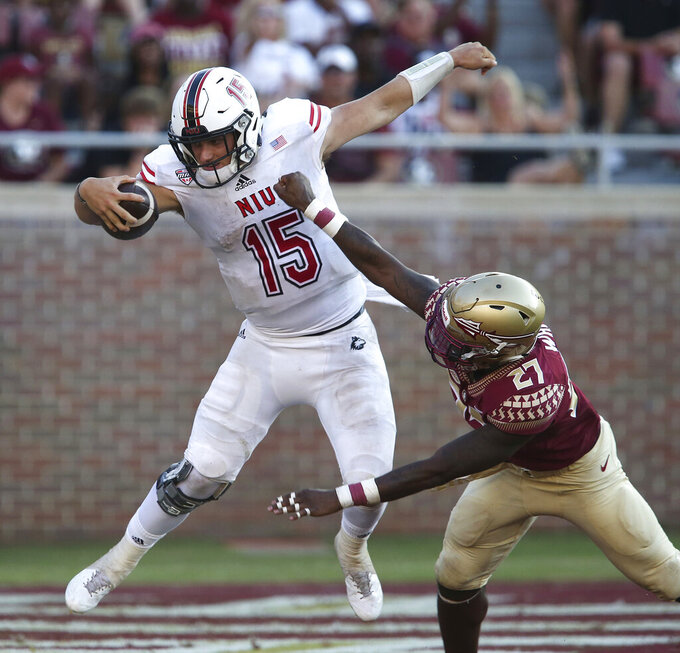 FILE - In this Saturday, Sept. 22, 2018, file photo, Northern Illinois' Marcus Childers scores a touchdown as he breaks the tackle of Florida State's Zaquandre White during an NCAA college football game, in Tallahassee Fla. The road trip to Tallahassee came with a $1.6 million payout to NIU. (AP Photo/Steve Cannon, File)

In 2018, with his school facing the possibility of cutting staff to make up a huge shortfall in state funding, Northern Illinois athletic director Sean Frazier added a football game at Florida State to the Huskies' schedule.

The road trip came with a $1.6 million payout to NIU.

Guarantee games, or buy games, are essential to many athletic departments that field Division I football teams but have far smaller budgets than those at Power Five schools. Even before the pandemic spawned a financial crisis, most Group of Five schools were using university funds and student fees to help pay for athletics.

This season, 39 major college football schools have scheduled a total of 49 buy games worth an estimated $65 million. If coronavirus disruptions cause Power Five teams to play more or only conference games, it could leave huge holes in the athletic budgets of schools already stretched thin.

The largest payout for a one-game deal with no return this season reportedly is $1.9 million by Auburn to Massachusetts. UMass has a $10 million budget for football. The Auburn game scheduled for Nov. 14 offsets much of the expenses for the rest of the Minutemen's schedule, athletic director Ryan Bamford said.

“If we lose that and we’re playing 11 other games, then it’s a major impact,” he said.

The pandemic has made everything about the coming college football season uncertain. There are some promising signs as states lift restrictions meant to curb the spread of the virus. University presidents are sending hopeful messages to students about plans to have campuses up and running in the fall. All plans are tentative these days.

Atlantic Coast Conference Commissioner John Swofford said this past week the league is looking at various scenarios from an abbreviated football season to none at all. If the season is cut short or rearranged, conferences will prioritize playing conference games, which usually have more value both financially and competitively.

Notre Dame athletic director Jack Swarbrick, whose school is a football independent, has encouraged conference commissioners to consider abbreviated schedules that preserve traditional nonconference rivalries (Florida-Florida State, for example) and high-profile games (such as Notre Dame-Wisconsin at Lambeau Field). That could protect Notre Dame, which has a five-game scheduling agreement with the ACC and traditional rivalries against USC, Stanford and Navy.

But if the wealthy Power Five conferences — ACC, Big Ten, Big 12, Pac-12 and SEC — close ranks, Group of Five schools will be out millions.

New Mexico State AD Mario Moccia also leads an independent football program, but the situation has no similarities to Notre Dame. New Mexico State is scheduled to make $2.75 million for road trips to UCLA and Florida this season.

“There is no modeling or ability to cut that could make up for that revenue so those games are critical to our entire operation,” Moccia told the Las Cuces Sun-News.

Kent State, from the Mid-American Conference, has three guarantee games this season with Alabama, Kentucky and Penn State worth $4.95 million.

The 12 MAC teams are playing 18 guarantee games this season, including Akron going to Clemson for $1.1 million. Earlier this week, Akron announced it was dropping three sports programs as a cost-cutting move because of shrinking revenue across the university due to the pandemic.

On Friday, Bowling Green dropped baseball. The Falcons have road trips scheduled to Ohio State and Illinois worth $2.2 million this season.

NIU, which has been one of the most successful programs in the MAC for more than a decade, has just one guarantee game among four out of conference this year: A $1.1 million deal to play at Iowa on Sept. 26.

If there is an emphasis on conferences games, the losses would trickle down to the FCS level. There are 114 FCS-FBC matchups this season, including many involving Group of Five schools. The payouts to FCS schools from FBS range from $200,000 to $750,000.

Arkansas State is getting $1.8 million to play at Michigan on Sept. 19. That's easy for Michigan to cover when it's playing in front of 110,000 fans. But what about if it's just friends and family in the Big House?

Arkansas State athletic director Terry Mohajir said his budget would take a hit if the Red Wolves of the Sun Belt can't play at Michigan.

“But I would think that as much as it hurts us, it’s going to hurt them, too,” Mohajir said. “I would imagine they make $15 to $17 million per home game. Our game against them is not as important to winning the Big Ten. But our game from a revenue standpoint is as important if they play Purdue.”