Column: Alabama's Nick Saban is Coach Killer of the SEC 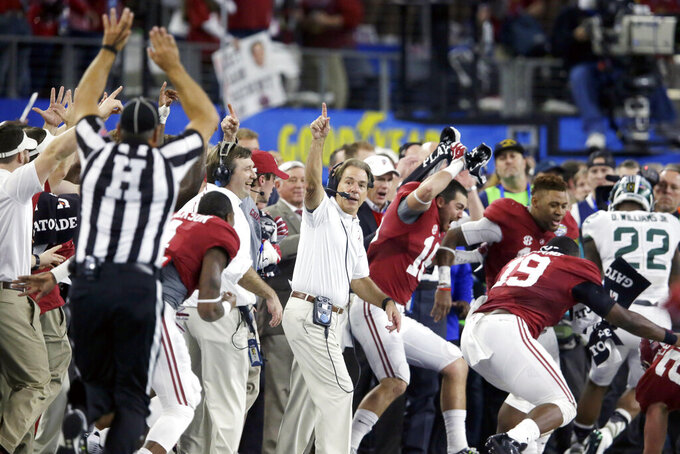 FILE - Alabama head coach Nick Saban and his team react at the end of the Cotton Bowl NCAA college football semifinal playoff game against Michigan State in Arlington, Texas, in this Thursday, Dec. 31, 2015, file photo. Alabama won 38-0 to advance to the championship game. Saban's dominating run at Alabama is more than just wins and championships. He's also ruined the careers of many of his fellow SEC coaches and cost the league's other 13 schools more than $100 million in buyouts -- all in search of someone who can knock the game's greatest coach from his perch.(AP Photo/LM Otero, File)

ATLANTA (AP) — They keep trying to knock him off.

A Kick Six here. A Joe Burrow there.

In the end, though, no one in the Southeastern Conference comes close to Nick Saban.

Over his 14-year reign at Alabama, the other 13 SEC schools have shuffled through a total of 35 coaches, who either were fired, quit, retired or moved on to other jobs.

More tellingly, those schools have doled out at least $120 million in buyouts to coaches who weren't up to the task — all in a futile quest to find someone, anyone, who can topple Saban.

Three more SEC coaches bit the dust this season, most notably Auburn's Gus Malzahn, who guided the Crimson Tide's fiercest rival to intermittent success against the Saban dynasty — but not enough to keep his job.

In the midst of a financially challenging pandemic, the Tigers will have to pay Malzahn more than $21 million to go away. That's on the top of settlements reached with their previous two coaches (Tommy Tuberville and Gene Chizik), which cost the school at least $12.5 million.

At 69 — the same age, by the way, that Bear Bryant retired as Alabama's coach — Saban shows no sign of slowing down.

“Obviously I love doing what I do, and want to continue to do it for as long as I feel like I can contribute in a positive way to the program,” Saban said. “That’s about the only plan I have for the future.”

Why would he stop now?

This year's Alabama team might be his best yet, having breezed through a 10-game, SEC-only schedule with a perfect record. No game was closer than 15 points, the average margin of victory for the top-ranked Crimson Tide a whopping 32.7 points.

And if anyone needed a reminder of how this behemoth keeps regenerating year after year, even after sending countless first-round draft picks to the NFL, Saban landed what is projected to be the nation's top recruiting class during this week's early signing period.

“It’s almost unfair,” Steve Spurrier, the former Florida coach who once cast a nearly Saban-like presence over the SEC, told Sports Illustrated for a profile piece this week.

Alabama, he said, was "like being in the NFL, winning the Super Bowl and every year they get the first 10 picks in the first round. And then they get 10 in the second round and the rest of you guys take everyone else.”

Saban's juggernaut heads into Saturday's SEC championship game in Atlanta as a whopping 17-point favorite over No. 11 Florida, not exactly a slouch of a team.

At least he still has a job.

“I guess I’ve survived because I’m still here,” quipped Mullen, who indeed has the second-longest coaching tenure in the SEC, having spent nine years at Mississippi State (where all nine of those losses occurred) before moving to Florida — and out of Saban's division, if nothing else — in 2018.

Mullen sounds almost resigned to playing second-fiddle to the Crimson Tide as long as Saban is around.

“I don’t know that it is knock them off or replace them. I don’t know that they’re going to go anywhere," Mullen said. “You just want to get up to their level and go compete on the same level as they are, and then go compete with them on a yearly basis.”

There have been some one-year wonders.

Remember Auburn back in 2010? With Heisman Trophy winner Cam Newton at quarterback, the Tigers rallied from a 24-point deficit for a 28-27 victory in Tuscaloosa on their way to a national championship.

By 2012, the Tigers had plummeted to a winless mark in the SEC that culminated with a 49-0 blowout to Alabama. The day after that embarrassment, Chizik was fired.

Or how about LSU just last season? Led by the record-setting Burrow, the Tigers knocked off Alabama in a 46-41 thriller, capped a perfect season by winning the national championship, and were touted as the nascent power in the SEC.

They had a charismatic coach in Ed Orgeron, who seemed the perfect fit to lock down a state rich in high school talent. They looked like the sort of program that could actually stand up to the big, bad Tide on a regular basis.

So much for that theory. When the teams met two weeks ago in Baton Rouge, Saban extracted his revenge with an ugly 55-17 beatdown. LSU will need to win Saturday's regular-season finale against Ole Miss just to salvage a 5-5 season.

All around the SEC, schools have tried futilely to uncover a coach who can stand up to Saban.

Will Muschamp has gotten a couple of opportunities, first at Florida, then at South Carolina. He was fired in both places, though the sting was surely offset by buyouts that will apparently total somewhere in the neighborhood of $20 million.

Not a bad neighborhood.

Georgia dumped longtime coach Mark Richt after the 2015 season and hired Saban protege Kirby Smart, who has guided the Bulldogs to a stellar record but is 0-3 against his former boss, including losses in the national championship game and the SEC title game.

Tennessee has already gone through four coaches in the Saban era and turned to another of his former assistants, Jeremy Pruitt, in hopes to being more competitive against the Tide.

But Pruitt is already on the hot seat after just three seasons, having lost every year to Alabama by an average margin of 30 points.

The famed “Third Saturday in October” rivalry has become a farce. The Volunteers have lost 14 straight games to the Crimson Tide, their last victory coming in 2006 — the year before Saban arrived.

SEC Commissioner Greg Sankey said the key to Saban's success is his adaptability.

At the beginning of his Alabama tenure, the Tide was run-oriented team that relied heavily on its defense. These days, they're a high-flying bunch averaging 49.5 points a game and led by two of the leading Heisman Trophy contenders, quarterback Mac Jones and receiver DeVonta Smith.

“You have to recognize he has adapted over time, the number of points he’s scoring, looking back to his early days as more of a defensive-minded coach,” Sankey said.

The commish is careful with his words. He can't appear to show favoritism to Saban's dynasty, but surely knows that other schools in the football-crazy conference are desperate to keep up.

“When you have sustained success, everybody wants to be at that level,” Sankey said. “That creates competitive pressure.”

But it doesn't really matter how many times those other schools flip coaches, or how many millions they squander in hopes of uncovering the next Saban.

Not as long as the real thing resides in Tuscaloosa.