Ehlinger last captain standing for Texas vs Buffs in bowl 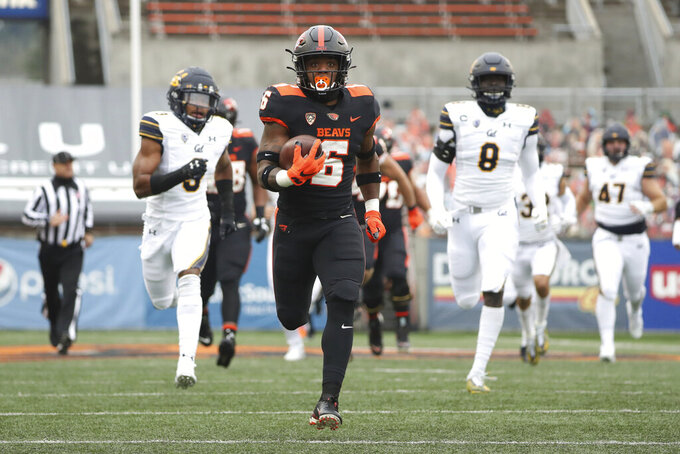 FILE - In this Nov. 21, 2020, file photo, Oregon State running back Jermar Jefferson (6) runs 75-yards to score a touchdown on the first play of an NCAA college football game against California in Corvallis, Ore. Jefferson was selected as the PAC-12 offensive player of the year along with Colorado running back Jarek Broussard. (AP Photo/Amanda Loman, File)

And then there was one.

Texas had seven team captains when the season started. Senior quarterback Sam Ehlinger will be the only one taking the field Tuesday nightwhen the No. 20 Longhorns (6-3) play Colorado (4-1) in the Alamo Bowl.

Five have opted out since late November — with a mass exodus after the regular season — and a sixth has been sidelined with an injury. That leaves Ehlinger alone to try to put a final stamp on a bizarre season that may or may not be his last in college. Ehlinger, who ranks near the top of most of the school's passing records, hasn't said yet if he will return for 2021, which would be allowed under NCAA rules put in place for this season.

“No seniors have really been in this position to where they’ve been granted an extra year of eligibility,” Ehlinger said during Texas’ bowl preparations.

“It’s not like there’s one clear-cut what’s best for you, and what’s best for the rest of my life,” he said. “There’s positives to each ... It’s a blessing to be in the situation that I’m in.”

The exodus of Texas captains began late in the regular season when safety Caden Sterns and offensive tackle Sam Cosmi announced their departures to prepare for the NFL draft. Center Derek Kerstetter then went down with a leg injury.

Then came the departures from the defense, which began with All-American pass rusher Joseph Ossai leaving to start preparing for the draft. Defensive lineman Ta’Quan Graham and defensive back Chris Brown soon followed.

Ehlinger has been the full-time starter since 2018 and ranks second only to Colt McCoy in the school record book for passing yards and touchdowns. Earlier this season, he said he'd never consider leaving early but didn't fault those who did. Now he has a chance to win a fourth consecutive bowl game, a rarity for a starting quarterback.

Even with the key departures, Dorrell figures Texas has plenty of talent to fill the gaps when the teams take the field in San Antonio.

“They have really good depth,” Dorrell said. “(Texas) is a very good team even thought they had a few guys opt out."

Texas freshman Bijan Robinson was one of the top recruits in the country. His carries have been limited but he had a breakout game with 172 yards and three touchdowns in a romp over Kansas State to end the regular season. Robinson looks like the future of the Texas offense.

The Longhorns will also be without wide receiver Brennan Eagles, a junior who led the team in catches (28) and yards (469) and then decided to prepare for the draft. That leaves Joshua Moore as Texas' top playmaker in the passing game. His 78-yard touchdown on the first snap of the season is the Longhorns' longest play from scrimmage in 2020.

Dorrell has the Buffaloes back in the postseason for the first time since the 2016 Alamo Bowl. Things have been a bit rougher for Texas coach Tom Herman. Despite getting a chance to play for a fourth consecutive bowl win, Herman was facing intense speculation for several weeks that he could be fired. His job status wasn't certain until Texas athletic director Chris Del Conte announced Dec. 12 that Herman would stay.

Texas defensive back D'Shawn Jamison has made his biggest impact on special teams. He has two career kickoff return touchdowns, a punt return TD and a blocked two-point conversion return for another score. He also had a 98-yard return against Kansas State this season that ended 1-yard shy of the end zone. Colorado's Brenden Rice had an 81-yard punt return touchdown against Utah.

The missing defensive talent leaves Texas with some big holes to fill. Between them, Ossai and Graham combined for seven sacks and 23 tackles for losses. Brown had one interception and led the defense with seven pass breakups.