Fans head back to stadiums, some with vax cards and masks 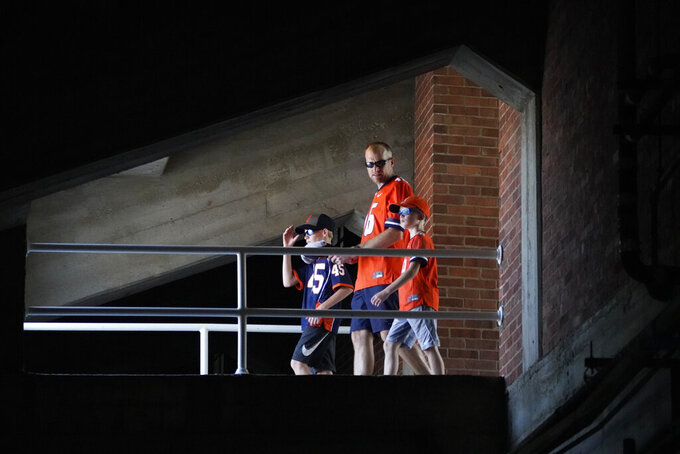 Three Illinois football fans head to their seats before an NCAA college football game between Illinois and Nebraska Saturday, Aug. 28, 2021, in Champaign, Ill. Fans headed back into stadiums this weekend and, along with binoculars, sunscreen and other essentials, many will be packing face masks. (AP Photo/Charles Rex Arbogast)

College football fans headed back into stadiums Saturday, some of them for the first time in two years. Along with binoculars, sunscreen and other essentials, some packed face masks and proof of vaccination.

With the availability of COVID-19 vaccines, the pomp and pageantry of fall Saturdays are expected to return in all their glory nearly everywhere across the country.

As far as Nebraska fan Capp Anson of Omaha is concerned, it beats the alternative. Last season, the Big Ten and Pac-12 allowed no fans and ACC, Big 12 and SEC teams limited stadium attendance to a fraction of their vast capacities.

“It's nice to be able to sit and watch it on a big screen TV at home and have the bathroom by you or go grab a cold beer if you need to, but to me there’s nothing like the experiences at the stadium," he said. "It brings out a good time for sure.”

Anson's Cornhuskers were among the handful of teams kicking off their seasons Saturday, losing 30-22 at Illinois in front of 41,064. New Illini coach Bret Bielema said his players felt a strong vibe from the fans during the team's traditional Illini Walk through the Grange Grove tailgating area.

“I appreciate everybody that came out and made this happen today,” Bielema said. “I thought our players really reacted to that and during the course of the game you really felt them. It had been so long since they were able to feel a crowd. Even though it wasn't totally sold out, it was definitely an energetic crowd.”

There wasn't quite as much electricity at the Rose Bowl, where the announced crowd was 32,982 for UCLA's 44-10 win over Hawaii. It was the second-lowest attendance at the Rose Bowl since the Bruins started playing there in 1982.

Fans tailgated and took in the UCLA band’s pregame performance at the Fan Zone. Many fans tried to go to the top level of the stadium, where there was shade from the scoreboard, trees and press box.

The crowd was held down by 95-degree heat in Los Angeles, a noon-hour kickoff, an undistinguished opponent and the fact students haven't returned to school.

It also didn't help that UCLA has not had a winning season since 2015 and coach Chip Kelly came in 0-6 in non-conference games.

Schools are eager to fill seats again after the massive financial hits they took in 2020.

Power Five teams bring in an average of $18.6 million annually from football ticket sales in a typical year, according to research by Patrick Rishe, director of the Business of Sports Program at Washington University in St. Louis. Top teams that play in the biggest stadiums generate more than twice that.

Rishe said he expects the surge in COVID-19 cases tied to the more easily transmissible delta variant to prevent a full return to normal. He noted most college football season ticket holders are over 50, a group more susceptible to becoming seriously ill.

“I don’t expect revenues will return to pre-pandemic levels even in the best of circumstances this year,” Rishe said.

Hawaii will not allow fans when it hosts Portland State next week because of a Honolulu ordinance barring large outdoor gatherings. No other school has announced an attendance limit, though specific attendance rules differ across the country.

San Jose State asked fans to show proof of vaccination when they entered the stadium for a game against Southern Utah. Unvaccinated fans, or those who can't prove they've been vaccinated, were let in but were required to wear masks at all times.

LSU, Oregon, Oregon State and Tulane have announced proof-of-vaccination requirements starting with their home openers next month. LSU will allow unvaccinated fans the option of showing proof of a negative COVID-19 test in the previous 72 hours.

The Oregon schools and Tulane also mandate fans wear face coverings at all times, even though they play outdoors. Many schools have told fans they must wear masks while indoors at their stadiums.

Daniel Rascher, director of academic programs for the Sport Management Program at the University of San Francisco, said people might be turned off by the screening process when coupled with delays caused by fans new to digital ticketing fumbling with smartphones to display barcodes.

“They don’t want to wait in line, or some of the fans aren’t vaccinated and don’t want to go out and get a COVID test and bring it with them," Rascher said. "You have to show your card or QR code and I don’t know if the schools are equipped to quickly scan that. You’re probably going to see the dip in demand because people don’t want to deal with it.”

Of 10 fans interviewed by The Associated Press, six said they have no hesitancy about returning to stadiums, even amid a spike in virus cases across the nation. Three said the risk of contracting COVID-19 is in the back of their minds, and one said he is taking a wait-and-see approach before deciding whether to go to games. All said they are vaccinated.

Eric Boggs of Edmond, Oklahoma, said he plans to attend games at Nebraska, Oklahoma and Oklahoma State this year. Boggs said even though he's vaccinated, seeing pictures of more than 90,000 people at the Aug. 14 Garth Brooks concert at Memorial Stadium in Lincoln, Nebraska, gave him pause.

“I'll still go,” Boggs said. "I just don’t know yet if I will wear a mask. I’ll probably have one in the pocket. It makes you re-think it a little bit when you start seeing the pictures and the numbers and stuff like that.”

Alabama and Auburn are in a state with one of the lowest vaccination rates in the country and rabid fan bases. Neither has announced stadium screenings or mask requirements, though Crimson Tide coach Nick Saban has been among those urging vaccinations.

“Outdoor events are safer in general than indoor events but having hundreds of thousands of people getting together during a pandemic is going to result in some disease transmission,” Harris said. "We hope people are vaccinated enough that that can be minimized, but with really large-scale outbreaks going on, you wonder how long those stadiums are going to stay full.”