Fertile ground for turnarounds, who is next to surge in AAC? 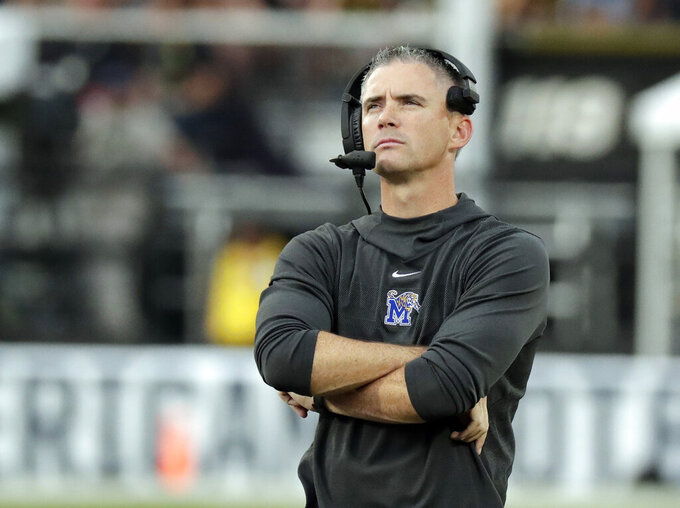 FILE - In this Dec. 1, 2018, file photo, Memphis coach Mike Norvell watches the scoreboard during the American Athletic Conference championship NCAA college football game against Central Florida, in Orlando, Fla. Norvell has produced explosive offenses at Memphis. The Tigers ranked seventh in scoring (42.9) last season and second (45.5) in 2017. But they haven’t been as good on the other side of the ball. Memphis ranked 94th in scoring defense (31.9) last year and 102nd (32.5) in 2017. (AP Photo/John Raoux, File)

Nobody saw Cincinnati coming in the American Athletic Conference last year. Not even Luke Fickell, who guided the team to a seven-victory improvement in his second season as Bearcats coach.

"As you go through it in your head did you really imagine yourself winning 11 games in Year 2?," Fickell said. "The progression throughout the entire year is what you remember most."

Best to expect the unexpected in the AAC. The league has been fertile ground for fast turnarounds since it rose from the ashes of the old Big East in 2013.

Starting in 2014, when Memphis jumped from three victories to 10 and a share of the conference championship, the American has had at least one team each season that reached double-digit victories while improving by at least four wins.

So while the major story line in the AAC is whether UCF can be dethroned — or simply defeated — after consecutive unbeaten regular seasons and conference championships, maybe the more interesting question is who will be next to take a giant leap?

— SMU under second-year coach Sonny Dykes was in the thick of the West Division race last season until losing its last two. The Mustangs add former Texas quarterback Shane Buechele, among several transfers who could give SMU more staying power.

— Navy is coming off its worst season in the 11-year tenure of Ken Niumatalolo at 3-10. Could a new defensive coordinator (Brian Newberry, previously at Kennesaw State), a re-commitment to shifty quarterback Malcolm Perry and a more manageable schedule spark a resurgence for the Midshipmen?

The conference lost its biggest star when UCF quarterback McKenzie Milton went down with a serious leg injury in the regular-season finale last year. One of the leading contenders to replace Milton, Darriel Mack Jr., who started in his absence, broke his ankle during the summer. That leaves Notre Dame graduate transfer Brandon Wimbush as the presumptive starter, though Mack should return at some point.

Wimbush started 16 games the past two seasons for the Fighting Irish. Accuracy has been a problem (50.5 career completion percentage), but his arm is strong, he is a dynamic runner (1,156 yards and 16 touchdowns), and he will not shy away from the spotlight.

"He's a charismatic guy. A great person to be around for sure. Wants to be a leader. Wants to be a part of the team," receiver Gabriel Davis said. "He fit right in to what we got going on."

Milton is hoping to return in 2020, but he will be coaching up his replacement this season.

The AAC has become known as a breeding ground for up-and-coming coaches. In recent years Tom Herman, Matt Rhule, Willie Taggart and Justin Fuente made the jump from the American to Power Five conferences.

Dana Holgorsen went against the trend, leaving West Virginia in the Big 12 to take over at Houston.

"To me there's no difference. The University of Houston and a lot of the schools in the American are no different than the conference I just left," Holgorsen said. "I'm looking at it from a coaching perspective. If I'm at any school in the quote, unquote Power Five — which I fully embrace us being a Power Six because of what I'm about to say — I look at the teams in this conference and I really don't want to play them in the nonconference. Because those guys are really good."

Holgorsen will benefit from the return of quarterback D'Eriq King, who accounted for 51 touchdowns in 11 games before a knee injury in November ended his season. Holgorsen will also have to navigate a strange and demanding early schedule. The Cougars play four games in 18 days, starting with a Sunday night opener at Oklahoma.

The American relishes its chances to prove itself against the Power Five. Houston's opener against OU is one of several opportunities, including:

— Cincinnati opens at home against UCLA and goes to Ohio State on Sept. 7.

— USF opens at home against Wisconsin and plays at Georgia Tech the next week.