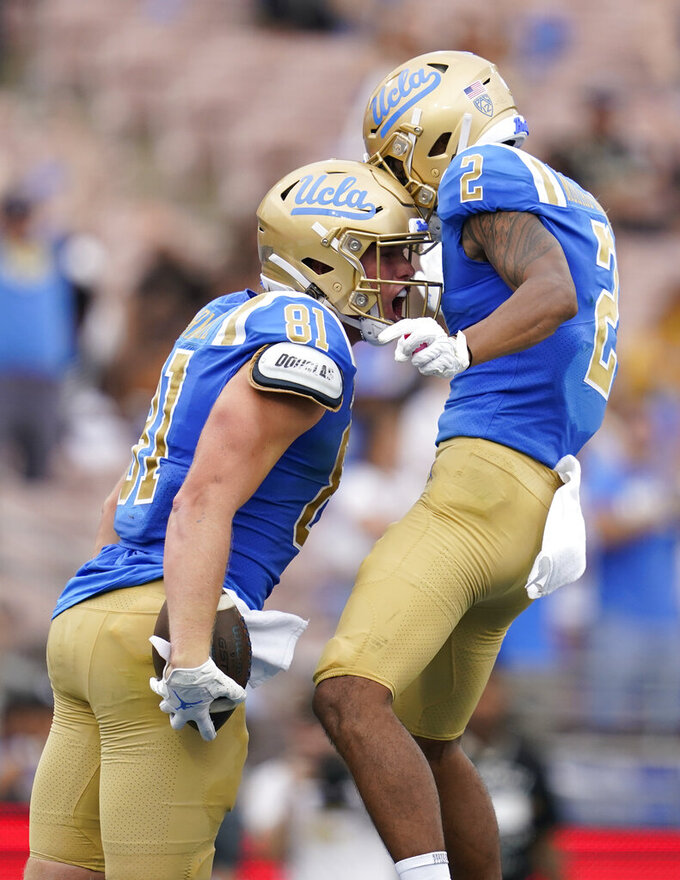 PASADENA, Calif. (AP) — Backup quarterback Ethan Garbers threw for 164 yards and ran for a pair of touchdowns, and UCLA improved to 2-0 for the second consecutive year with a 45-7 rout of Alabama State on Saturday.

He completed 14 of 18 passes with both of his rushing scores coming in the second quarter as the Bruins built a 31-7 halftime lead.

“We got an opportunity to play a lot of guys," coach Chip Kelly said. “You learn by doing, and we had some guys that got valuable playing experience in a college football game with referees, with ramifications if you make a mistake."

The Bruins ended up having 84 players get snaps, including four quarterbacks and six running backs. Garbers played most of the fourth quarter of last week's opening win over Bowling Green and figured he was going to see extended action this week with the Bruins facing a Football Championship Subdivision squad.

“I had prepared this whole week as if I was going to play,” Garbers said. "You got to go into it with the mindset of just ‘you’re here right now, you gotta be here right now and just got to do your job.’ Pretty much, that’s it.”

Garbers' only mistake came in the fourth quarter, when he was intercepted by Adrian Maddox in the end zone on third and goal at the ASU 5 on a pass intended for Josiah Norwood.

Thompson-Robinson was on target for his first six passes, including a 25-yard TD to Hudson Habermehl late in the first quarter, and finished 9 of 11 for 101 yards. Kelly did not expound on Thompson-Robinson's status for next week.

“Obviously we rotated a lot, had a lot of guys in the game, so being able to share the love I think was the best thing about today,” linebacker Bo Calvert said. “Being able to see see guys come in that don’t have the spotlight as much, being able to see those guys make plays was awesome.”

Crawley was 16 of 27 for 177 yards with a touchdown and interception. Starter Dematrius Davis did not play after being injured in last week's win over Miles.

“Early on the offense was moving pretty good. I think skill wise, that’s really where we can compete," Alabama State coach Eddie Robinson Jr. said. "But once you start getting into those bigger guys, that’s where it kind of catches up."

The Bruins averaged 5.8 yards per carry despite Zach Charbonnet not playing. The junior was limited in practice on Thursday but was in uniform and on the sideline. Grubb led the way with 58 yards and Harden added 56.

UCLA rushed for 224 yards, improving to 17-4 under Chip Kelly when they gain over 200 on the ground.

AND THEN THERE WERE TWO

With UCLA facing a FCS team for the first time, Notre Dame and Southern California remain the only schools who haven't played a team outside the FBS.

However, the Fighting Irish will face Tennessee State next season.

Alabama State: The Hornets fell to 0-12 against FBS opponents since 1980. They have been held to 19 points or fewer in every game.

UCLA: The Bruins have scored at least 42 points in five consecutive games dating back to last season. They are averaging 47.6 points per contest with an average winning margin of 29.4 during that span.