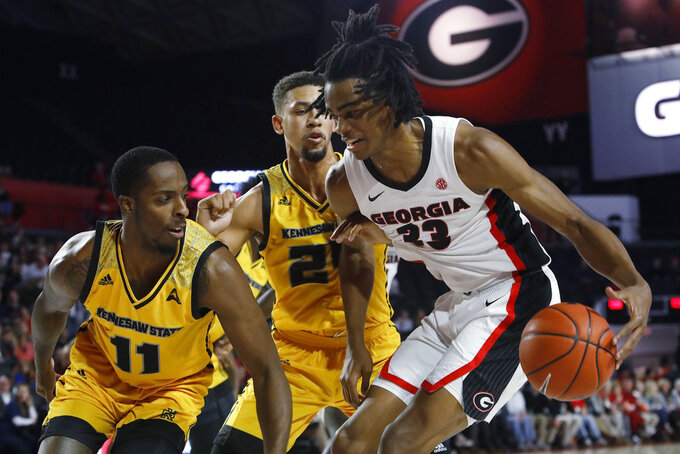 "Nic had zero turnovers too," Crean noted. "He has continued to get better and better. He is attacking with his eyes up. He is seeing things so much better. That is a guard skill. He is a basketball player who just happens to be really tall and really long. He is gaining confidence all the time."

Nicolas Claxton said he and his teammates are still adjusting to Crean's style.

"We are figuring how fast we have to play," he said. "Once we figure that out, we will be scary. When everything is clicking, it is lovely."

Kennesaw State (1-7) got 12 points from Ugo Obineke, 11 from Tyler Hooker and 10 from Bryson Lockley.

The Bulldogs won the rebounding battle 53-35 and limited the Owls to an abysmal 28 percent shooting.

"It's really pretty simple," said Kennesaw State Coach Al Skinner. "You've got to be able to put the ball in the basket. We didn't score the ball very well, and it led to run-outs for them. The game is that simple for us right now."

The Owls were able to stay close the first seven minutes, trailing 11-10 at 13:02 after a short jumper by Lockley. But the Bulldogs went on a 13-1 run over the next 4:51, stretching the lead to 24-11 after two Turtle Jackson free throws.

Georgia had another 15-0 run near the end of the half, featuring a pair of 3-pointers by Tyree Crump.

If it seemed like time was standing still for the struggling Owls, it was. Crump's second 3-pointer came with 2:18 showing on the clock. Moments later Hammonds scored on a layup, and the clock still showed 2:18. Officials had to stop the game to reset the clock to 1:39, based on the electronic scorebook kept at courtside.

Another 19-2 run by the Bulldogs in the middle second half settled the outcome. It also stirred the Georgia crowd after a quiet first half. The attendance was announced at 5,947, the smallest yet during Crean's first season as the Bulldogs' head coach.

DID SOMEONE MENTION FOOTBALL

Guard Jordan Harris said he and his teammates are "locked in" on Saturday's SEC championship football game against Alabama. "Elijah Holyfield is my best friend," said Harris, "so we are definitely locked in." ''We're going to get the job done," said Nicolas Claxton.

Contributing mightily to Kennesaw State's shooting woes was a 1-for-15 effort from the 3-point line. Georgia coach Tom Crean said, "I don't know if I have ever coached against a team that went one for 15."

Georgia: After two one-sided losses in the Cayman Islands to No. 16 Clemson and Georgia State, the Bulldogs found firmer footing in Stegeman Coliseum, site of its next three games. Playing a faster pace this year under new coach Tom Crean, the Bulldogs have been averaging 17.3 turnovers a game. They were only marginally better against Kennesaw State with 16.

Kennesaw State: The Owls came into Tuesday's game shooting 37 percent from the field, and went backward. The Owls shot 27.9 percent, their worst single-game performance of the year. Discounting the one-for-one season so far by Adili Kuerban, the Owls have only one other player who has made more shots than he has missed. Isaac Mbuyamba is 5-for-9 this year.

Georgia: With no game until Dec. 3 against Texas Southern, Georgia's basketball team can afford to get caught up in football mania as the Bulldog football team points to the SEC championship game with Alabama Saturday. Texas Southern (2-5) is having a Jekyll and Hyde season, opening the season with a win over and Baylor and then losing five straight before beating No. 18 Oregon Monday night.

Kennesaw State: The Owls will try to break their seven-game losing streak when Hofstra visits Saturday, December 1. Hofstra won last year in the first-ever meeting between the two schools by the palindromic score of 75-57.