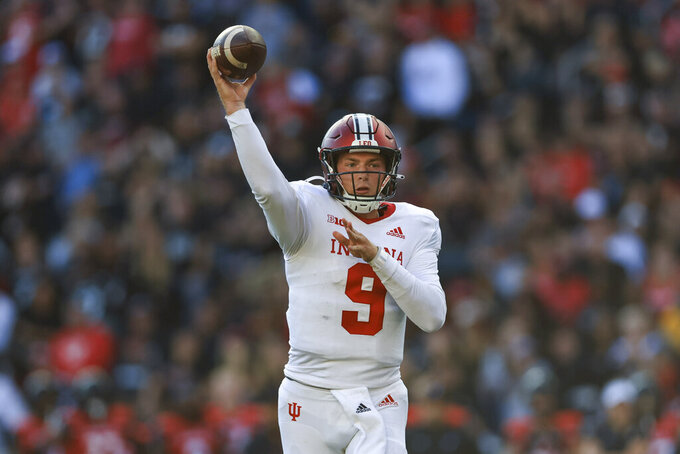 Indiana quarterback Connor Bazelak throws a touchdown to running back Shaun Shivers during the second half of an NCAA college football game against Cincinnati, Saturday, Sept. 24, 2022, in Cincinnati. Cincinnati won 45-24. (AP Photo/Aaron Doster)

Line: Nebraska by 5 1/2, according to FanDuel Sportsbook.

This is the first of the Cornhuskers' two straight crossover games with Big Ten East opponents, and the results will show if they have a chance to be competitive in the West under an interim head coach and new defensive coordinator. Their season-opening loss to Northwestern looks worse by the week. Indiana must get off to a better start than it did last week against Cincinnati. The Hoosiers were down 38-10 at halftime but allowed just 81 yards and a touchdown the rest of the way.

Indiana pass offense vs. Nebraska pass defense. No team in the nation has thrown more passes than the Hoosiers. Only 17 FBS teams have completed a lower percentage. Connor Bazelak, who started for two seasons at Missouri before transferring, is 3-8 with 12 interceptions on the road against Power Five teams. Nebraska is 115th nationally and last in the Big Ten in passing yards allowed and hopes to improve after making some subtle personnel moves in the secondary during the off week.

Indiana: WR Cam Camper and RB Josh Henderson. Bazelak and Camper have developed chemistry quickly. They’ve hooked up 33 times for 418 yards with one TD. Henderson is Indiana’s No. 2 back, but his physical style and ability to catch has given the Hoosiers new dimensions.

Nebraska: RB Anthony Grant had three straight 100-yard games before getting shut down by Oklahoma. The Huskers will want to get him going to help keep the ball away from an Indiana offense that ran a national season-high 104 plays last week.

This is only the third meeting since Nebraska joined the Big Ten in 2011. ... Indiana won 38-31 as a slight underdog the last time it visited Lincoln, in 2019. Coach Tom Allen called it a “program-changing win.” ... Hoosiers WR D.J. Matthews is week-to-week with an undisclosed injury. ... Busch was co-DC at Rutgers in 2017 and DC at Utah State in 2009-10. ... Trey Palmer's 28 catches are the most ever by a Nebraska player through four games.