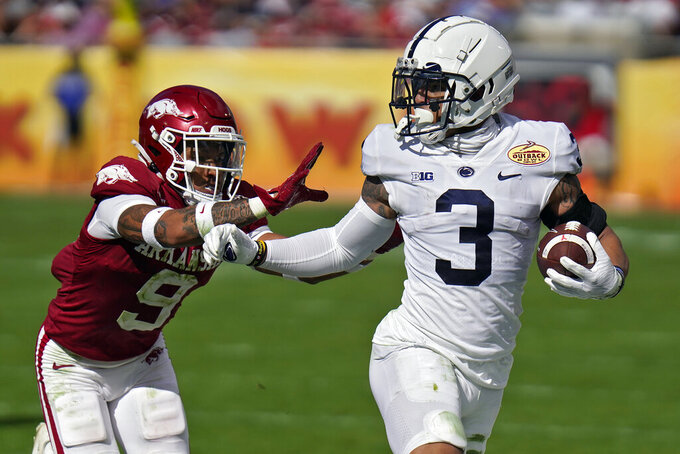 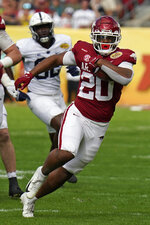 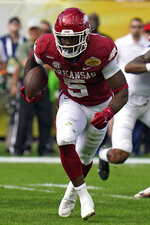 TAMPA, Fla. (AP) — Arkansas football is on the rise.

KJ Jefferson picked up 104 of his 110 rushing yards in the second half and threw for 90 more to lead No. 22 Arkansas past Penn State 24-10 in the Outback Bowl on Saturday. Raheim Sanders had 79 yards and two touchdowns on 13 rushing attempts and Dominique Johnson added 85 yards on 11 carries as the Razorbacks finished with 361 yards on the ground.

Arkansas (9-4), coming off four consecutive seasons of four or fewer wins, got its first nine-win year since going 11-2 in 2011. The Razorbacks also played in their first bowl game since the 2016 Belk Bowl.

“I believe in this program and where it’s headed,” Sanders said. ” I know coach Pittman has a plan in place and this is just the beginning. We want to compete at the highest level. In order to do that we have to win these games, beat these teams and continue to raise our game.”

Jefferson ran 20 times while completing 14 of 19 passes. The 6-foot-3, 245-pound sophomore was sacked five times and limited to 6 yards rushing on 11 carries during the first half.

“I'm just embracing it," said Jefferson, who was the game's MVP.

Jefferson and Sanders had TD runs, and Cam Little made a 36-yard field goal in the third quarter to put Arkansas up 24-10.

Arkansas took the opening kickoff in the second half and put together a seven-play, 75-yard drive that concluded with Jefferson’s 8-yard TD run.

Jefferson was hurt and left for several plays after a 34-yard dash later in the third period, and was replaced by Malik Hornsby. He had a 32-yard run to set up Sanders’ 1-yard score with 2:00 left in the quarter.

“We did a really good job in the first half of limiting explosive runs,” Franklin said. “But in the second half they made an adjustment, a commitment to run the quarterback.”

Jefferson said he had the wind knocked out of him on the play. Hornsby had 67 yards on four carries.

Penn State led 10-7 at the half thanks to a 43-yard field goal by Jake Pinegar. The Nittany Lions tied it at 7 early in the second quarter when Clifford took advantage of blown coverage and hit a wide open KeAndre Lambert-Smith for a 42-yard touchdown.

“I don’t know. I wouldn’t say I’m frustrated, we just have to take this loss to heart and work harder in the offseason to get better next season," Lambert-Smith said. "We needed to do the little things. We had to play better and execute better.”

Arkansas took a 7-0 lead on the last play of the first quarter when Sanders had a 3-yard TD run. The Razorbacks converted a pair of fourth-down plays during the drive, including Jefferson avoiding a sack and running for 13 yards.

“We need to thank Penn State,” Pittman said. “Penn State had a lot of guys go to the NFL and coach Franklin elected to play the game. I respect that big time.”

Jefferson had his streak of 171 consecutive passes without an interception end when Ji’ Ayir Brown picked off his second throw of the game in the first quarter. Brown finished with two interceptions. … Penn State DE Smith Vilbert had three sacks. ... Arkansas S Joe Foucha had an interception in the end zone and a sack during the second half.