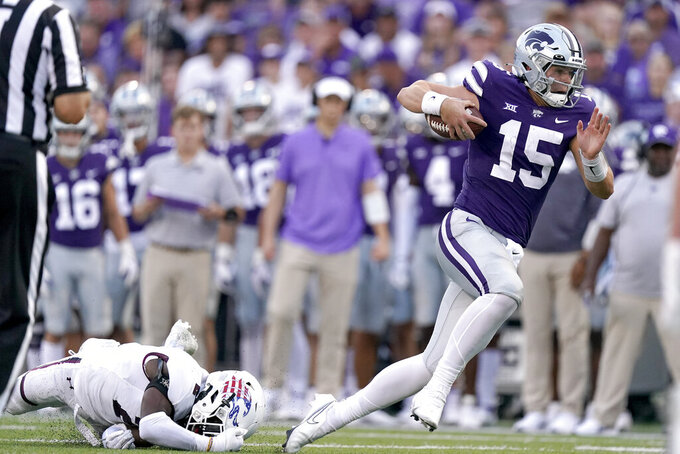 Kansas State quarterback Will Howard (15) gets past Southern Illinois cornerback James Ceasar (2) to run the ball during the first half of an NCAA college football game, Saturday, Sept. 11, 2021, in Manhattan, Kan.(AP Photo/Charlie Riedel)

The Wildcats defense forced a fumble on Southern Illinois' following possession to seal it. The Wildcats held the Salukis scoreless in the second half and surrendered just 126 yards.

“We’re excited about getting the win," Kansas State coach Chris Klieman said. "I know the league they play in really well, and I know if we let them hang around they’ll cause you trouble.”

Kansas State starting quarterback Skylar Thompson left the game in the first quarter due to injury. Thompson appeared to suffer a non-contact injury in attempting to block for running back Vaughn.

Thompson, who is a sixth year senior, missed all but three games last year due to an injury to his throwing shoulder that required surgery. Thompson made his 32nd start at quarterback as a Wildcat, which tied him for most in school history.

“I was pretty emotional, I saw it happen last year and kind of had déjà vu," Klieman said. "I’m devastated for him. We’ll pray for the best.”

Vaughn ran for 120 yards and three touchdowns while Malik Knowles had 112 receiving yards for Kansas State (2-0). Will Howard went 8-for-17 passing for 76 yards with a rushing touchdown and an interception.

Kansas State's offense stalled absent Thompson. A 21-3 Wildcat lead in the first half turned into a 23-21 deficit by halftime. The Wildcats had three straight possessions with a turnover and finished with four total.

“I feel like they’re a good football team and we couldn’t get in a rhythm," Southern Illinois coach Nick Hill said. "We had a chance in the end and we’ll all hold each other accountable for getting better.”

Southern Illinois: The Salukis saw an opportunity to exploit the Wildcats without Thompson and nearly pulled the upset.

Kansas State: It will need to work on its offense, but without Thompson, time will tell if it gets any better against better opponents.