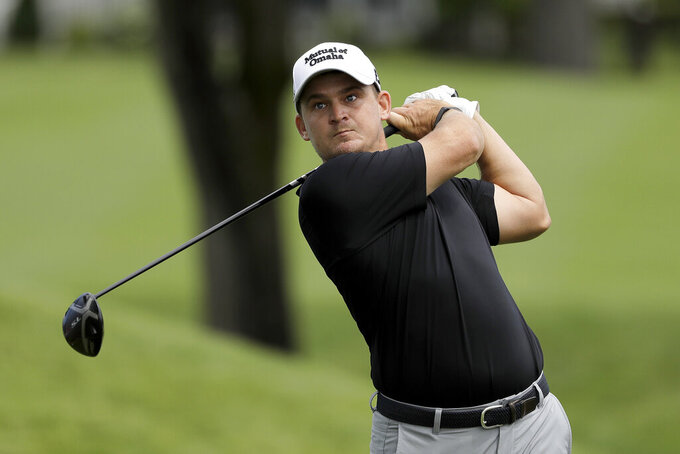 Bud Cauley tees off on the third hole during the first round of the Travelers Championship golf tournament at TPC River Highlands, Thursday, June 25, 2020, in Cromwell, Conn. (AP Photo/Frank Franklin II)

Morehouse College canceled its football and cross country seasons because of the coronavirus pandemic.

President David A. Thomas said scholarships would be honored. The Historically Black College in Atlanta competes at the NCAA Division II in the Southern Intercollegiate Athletic Conference.

“Like all of the decisions we’ve made related to COVID-19, this was a difficult one but was made with the health and well-being of our students and community in mind,” Thomas wrote on school website.

Thomas also wrote about the difficulty in safely travelling and hosting games and events while maintaining social distancing. ___

The positive tests were detected as part of the screening process for returning to campus.

The workouts have been halted until at least July 5.

Cleveland Indians president Chris Antonetti said a “couple” of staff members have chosen not to take part in the resumption of training camp due to COVID-19 concerns.

Speaking on a Zoom call Friday, Antonetti did not identify the staffers who have opted out or specify their roles in the organization. He added that he’s unaware of any players declining to participate because of health reasons. Antonetti said the club has spoken to “every high-risk individual” about the risks of returning.

The Indians are scheduled to re-open camp on July 1 in Cleveland.

“We would be fully supportive if anyone felt this wasn’t the right environment for them to participate,” he said.

Antonetti added that the club has “had a few isolated cases” of players testing positive for the coronavirus. He said there were cases in the Dominican Republic as well as at the team’s training facility in Goodyear, Arizona. He said all of the infected individuals have recovered or are only showing mild symptoms.

The baseball Hall of Fame museum has reopened after being shut for more than three months.

Closed on March 15 because of the coronavirus pandemic, the Hall welcomed visitors on Friday in Cooperstown, New York. Face masks are required from all staff and guests.

The shrine is selling tickets that permit visitors to reserve a specific date and time to enter, reducing congestion in the front lobby and throughout the museum. Some of the Hall’s bigger gathering spots will remain closed. The popular plaque gallery is open.

The Hall announced earlier that this year’s Hall of Fame induction ceremonies had been canceled because of the virus outbreak. Derek Jeter, Marvin Miller, Ted Simmons and Larry Walker will be enshrined next year, on July 25, 2021.

Two more players on the PGA Tour have withdrawn from the Travelers Championship because of COVID-19.

Denny McCarthy told Golfchannel.com that he withdrew after feeling sick Thursday night and testing positive for the coronavirus on Friday. Bud Cauley, who played with McCarthy on Thursday, also withdrew before Friday’s second round.

McCarthy became the third PGA Tour player to test positive for the virus since its restart and the second this week, joining Cameron Champ who withdrew on Tuesday. Nick Watney withdrew just before the second round of last week’s RBC Heritage Championship.

Webb Simpson, Graeme McDowell, Brooks Koepka and his brother Chase also withdrew from the Travelers after coming into contact with people who had the virus. The caddies for McDowell and Brooks Koepka both tested positive. Simpson cited the positive test of a family member.

Tennessee’s athletic budget for 2020-21 assumes the Volunteers will have fans in the stands for football season but still includes a $10.1 million cut in overall revenues.

University of Tennessee President Randy Boyd says reducing the number of fans further because of the coronavirus pandemic would have a “significant impact” on the budget. But Boyd said Friday that Tennessee is financially prepared to handle any problems.

Tennessee projects a drop of 19.4% with $29.8 million in revenue from athletic ticket sales. That would be down $7.1 million from the $37 million taken in over 2019-20. John Compton, chairman of the UT Board of Trustees, says that estimate is appropriate for now. He also says Tennessee will be able to handle if ticket revenue winds up even 50% lower.

The Volunteers won their final six games last season under coach Jeremy Pruitt. They are scheduled to host Florida and Alabama, which are traditionally big draws for fans.

Athletic director Phillip Fulmer has said Tennessee is expecting to fill Neyland Stadium this season and will adjust as needed.

World Triathlon has resurrected a second race in its world series, in Montreal in October.

The pandemic shelved the seven-race series, and the finals in Edmonton in August were canceled.

But the Hamburg stop in July was postponed to September, and the Montreal leg in June will race on Oct. 4.

A new date for the World Cup leg in Arzachena, Italy that was postponed in May was also found -- Oct. 10.

Virginia says its football players can begin returning to campus on July 5 if they participate in a voluntary workout period under protocols set by the school’s health system.

The voluntary workouts will go from July 5-14, followed by required activity for up to eight hours a week including weight training, conditioning and film study from July 15-25. The program will then transition into a two-week period of required activities for 20 hours a week including walk-through sessions before fall training camp opens on Aug. 9.

The UVA Health System also will be required to report positive tests or cases to the local health district and to the athletics program’s team physicians.

The Cavaliers are scheduled to open the season against Georgia on Sept. 7 in Atlanta.

Brewers general manager David Stearns says no Milwaukee players have opted out of playing this season for personal reasons. He says “a small number of individuals in our organization” have tested positive for COVID-19 but were asymptomatic. He didn’t specify the number or say whether these individuals were players, other team employees or both.

The NBA and the National Basketball Players Association say 16 players tested positive for coronavirus in the first wave of mandatory tests done in preparation for the restart of the season.

Those 16 players were part of a pool of 302 tested on Tuesday. Tests are continuing for all 22 teams that will be participating in the restart at the Disney campus near Orlando, Florida, next month. The player names were not disclosed; some, such as Malcolm Brogdon of Indiana and Sacramento teammates Jabari Parker and Alex Len have publicly acknowledged they have recently positive.

That was a 5.3% rate of positive tests leaguewide. The league did not announce results of testing on staffers and other members of team travel parties, all of whom are also part of the mandatory testing program.

The league and the union say that “any player who tested positive will remain in self-isolation until he satisfies public health protocols for discontinuing isolation and has been cleared by a physician.”

The Carolina Hurricanes will begin “voluntary small-group training” at PNC Arena on Tuesday.

The team said Friday those sessions will be closed to the public and media. Sixteen players, divided into two groups, are expected to participate.

Players and staff permitted inside the arena will be tested for COVID-19. Team personnel will follow safety guidelines outlined in the second phase of the NHL’s return plan, as well as those from the Centers for Disease Control and Prevention, and North Carolina’s Department of Health and Human Services.

The team says the arena has received “extensive cleaning” during the suspended NHL season and there will be “enhanced cleaning and sanitation efforts” going forward.

The Davis Cup men’s tennis competition has been canceled this year because of the coronavirus pandemic and will pick up again in 2021.

Matches were scheduled for this September and the Davis Cup finals were set for November in Madrid.

Now the World Group I and World Group II preliminary matches will be played in various sites in either March or September 2021. The finals will be in Madrid during the week of Nov. 22, 2021.

The International Tennis Federation says the 18 nations that already qualified for the 2020 finals will get a spot in 2021.

The ITF has also scrapped the women’s Fed Cup finals for this year and says they will be played April 13-18 in Budapest, Hungary.

The Fed Cup originally was supposed to be played this April but was initially postponed because of the pandemic.

Diamond League track meets in France and the United States have been canceled because of the coronavirus pandemic.

Organizers say the Sept. 6 event in Paris and the Prefontaine meet on Oct. 4 in Eugene, Oregon, cannot be held because of the current restrictions on mass gatherings and international travel.

A meet in Gateshead, England, has been postponed from Aug. 16 to a possible date in mid-September.

The next possible Diamond League meet is scheduled for Aug. 14 in Monaco.

This year’s Fed Cup finals have been rescheduled for 2021 because of “challenges” related to the coronavirus pandemic.

The 2020 event was originally scheduled for April but was postponed because of the pandemic. Officials had hoped to squeeze the competition in this year.

The ITF says there are “significant logistical and regulatory challenges” to holding “an indoor mass gathering” at the Laszlo Arena. The tennis body says “guaranteeing the health and safety of all involved will not be feasible.”

Tennis great Goran Ivanisevic says he has tested positive for the coronavirus.

The former Wimbledon champion coaches top-ranked Novak Djokovic and was at the recent Adria Tour exhibition series in Serbia and Croatia.

Djokovic and three other players have also tested positive for the virus after playing in the events. Grigor Dimitrov, Borna Coric and Viktor Troicki are the others.

Ivanisevic won the Wimbledon title in 2001. He says he twice tested negative for the virus over the past 10 days but has now tested positive.

Ivanisevic says “I would like to inform everyone who has been in contact with me that I tested positive and ask them to take extra good care of themselves and their loved ones.”

The Croat says he has no symptoms but will self-isolate.