Miami has 3 games PPD by virus; A&M on pause for 2nd week 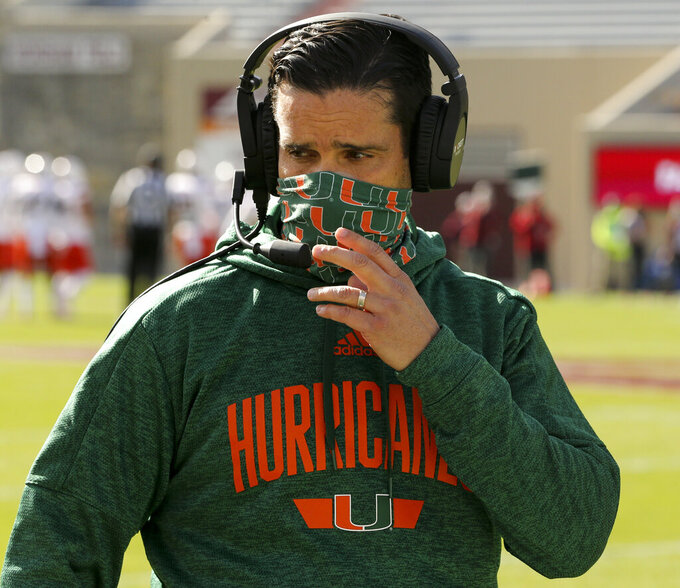 No. 12 Miami had its remaining three games rescheduled Monday because of COVID-19 cases in the program, forcing the Atlantic Coast Conference to shuffle a total of six games over the last month of the season.

Georgia Tech at Miami scheduled for Saturday is now tentatively set for Dec. 19, the date of the ACC championship game. Miami's game at Wake Forest that was scheduled for Nov. 28 was moved to Dec. 5, and its game against North Carolina was moved back a week to Dec. 12.

“What we know is we don’t have a coronavirus-in-college-football problem. We have a coronavirus-in-America problem,” Miami coach Manny Diaz said Monday. “And everyone, I hope, can see or I would hope can see — you can’t say everyone can see, because the way things are in 2020 everybody can’t agree on anything — but certainly the math is saying that the numbers are really, really getting to a bad place.”

Georgia Tech, which had its game last week against Pittsburgh postponed because of COVID-19 issues with both teams, joins No. 5 Texas A&M and Arizona State as teams that will now go two weeks without playing.

The number of games across major college football scheduled for this weekend that have already been called off is up to seven after four went down Monday, including Mississippi at Texas A&M and Charlotte at No. 15 Marshall.

Aggies coach Jimbo Fisher said the program had only one active COVID-19 case but the number of players available to practice was “in the 40s,” about half of what it would usually be. Most of the absences were due to individuals being quarantined after being exposed to someone who tested positive for the virus.

“We were wondering if we’d even have football. So we can complain about this and this and that but, listen, we’re still getting to play football,” Fisher said. "The season’s going on. So those are great things for us and the SEC and everybody in college football.”

The Southeastern Conference has had eight games postponed this season. The SEC said the Texas A&M-Ole Miss game could be made up Dec. 19, the day of the league championship game. The Aggies are scheduled to play the make-up against the Volunteers on Dec. 12.

To accommodate for Miami's issues, the ACC moved up the Wake Forest at Louisville game from Dec. 5 to Nov. 28 and moved Louisville at Boston College back from Nov. 27 to Dec. 12.

Also, the Big 12 officially set the date of its conference title game for Dec. 19.

Last week, 15 FBS games were called off because of COVID-19, the most yet this season. The total since schedules were set in late August is nearing 70.

While the college football season lurches toward a finish in late December, the NCAA is making plans it hopes will save March Madness in 2021 after having it canceled by the pandemic earlier this year. The NCAA said Monday it wants to move the entire Division I men’s basketball tournament to one geographic location and is in talks with Indianapolis to be the host city.

Major college football conferences have been tweaking policies to provide their schools flexibility to schedule games on short notice.

The Pac-12 signed off on California playing at UCLA on Sunday, less than 48 hours after the Bears and Bruins had their original Saturday opponents postpone. Utah, which has had to postpone its first two games because of COVID-19 cases, is scheduled to host No. 20 Southern California this Saturday.

If the Utes still can't play, USC and Colorado might be able to instead. The Trojans and Buffaloes are currently scheduled to meet in Los Angeles on Nov. 28.

“For that to occur, it wouldn’t be a tremendously hard thing for us to shift gears to do,” Colorado coach Karl Dorrell said. “It would be harder if you tried to play someone out of conference, that you don’t have much familiarity with.”

The SEC is allowing teams to re-work schedules as late as Monday night for the following weekend. No rematches are allowed and only games that already exist on the conference-only schedule can be moved up. No new matchups can be created, the way the Pac-12 did with Cal-UCLA.

The SEC also decided to use Dec. 19 as a make-up date for teams not involved in the conference title game. That probably won't work for LSU-Alabama, which was among four SEC games postponed last week. The top-ranked Crimson Tide and No. 6 Florida are on track to play for the league championship.

LSU already has a make-up game with Florida scheduled for Dec. 12, and the SEC set its television times for Thanksgiving weekend, which includes the Iron Bowl between Alabama and Auburn.

Any juggling of schedules in the SEC is likely to come after Thanksgiving weekend.

“I believe LSU and Alabama will play, but we don’t know for sure,” LSU coach Ed Orgeron said.

Pitt coach Pat Narduzzi said he expects his team to be ready to play Virginia Tech this weekend, but he also expected the Panthers to be able play last week until Wednesday's test results came back.

“You don’t know. You don’t know until really Friday at midnight or Saturday morning when you wake up you get your text message that says, hey, everything’s good,” Narduzzi said. “We’ve gotten used to it.”