No. 11 Minnesota looks to bounce back against Northwestern 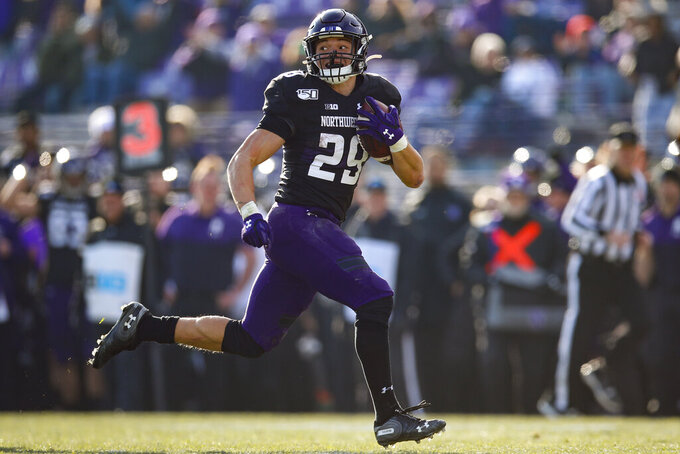 Northwestern's Evan Hull runs to score a touchdown against Massachusetts during the second half of an NCAA college football game Saturday, Nov. 16, 2019, in Evanston, Ill. (AP Photo/Jim Young)

Coming off a victory over then-No. 5 Penn State, Minnesota saw its shot at making the College Football Playoffs take a big hit with a 23-19 loss at Iowa last week. But the Big Ten West-leading Gophers remain a game ahead of No. 14 Wisconsin, with a home game against the Badgers next week. Northwestern snapped a seven-game losing streak with a 45-6 romp over UMass.

WRs Tyler Johnson and Rashod Bateman vs. Northwestern’s secondary. The Wildcats will be tested by the Big Ten’s top two receivers, with Bateman (945 yards, 44 catches) leading the league and Johnson (900 yards, 59 receptions) second. Northwestern ranks seventh in the league in pass defense.

Minnesota: QB Tanner Morgan. The sophomore leads the Big Ten in passing at 246.8 yards per game and ranks second in efficiency behind Ohio State’s Justin Fields. But his status was in question after he exited the final series last week following back-to-back sacks. If he’s not available, true freshmen Cole Kramer and Jacob Clark would start.

Northwestern: RB Evan Hull. The freshman ran for 220 yards — the most by a Wildcat making his first career start — and four touchdowns last week after combining for 15 yards on eight carries in his first three games.

The Gophers look to hit the 10-win mark for the sixth time — and first since the 2003 team went 10-3. ... Coach P.J. Fleck is trying to join Henry Williams and Glen Mason as the only coaches to lead them to 10 or more wins in a season. ... Morgan has back-to-back 300-yard games (339 against Penn State, 368 at Iowa) and four in his career. ... Minnesota had its 11-game winning streak snapped last week. ... Minnesota ranks third in Big Ten in scoring offense and total offense. ... The Wildcats need to win their remaining games against the Gophers and Illinois to finish 4-8. That would match the 2006 team for the worst record in coach Pat Fitzgerald’s 14 seasons. ... Northwestern is in danger of going winless in conference play for the first time since the 1998 team finished 0-8 in the Big Ten and 3-9 in Gary Barnett’s final season.