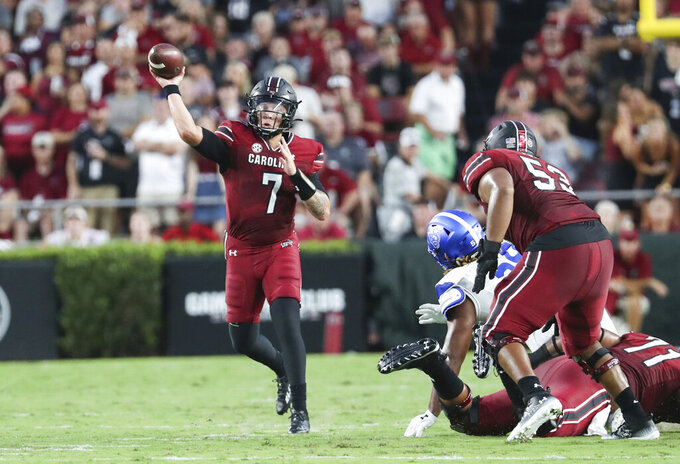 The Oklahoma transfer threw his first touchdown pass as a Gamecock in the third quarter, a 16-yarder to running back MarShawn Lloyd that put South Carolina ahead for good, but it was sandwiched between a pair of interceptions. Rattler passed for 227 yards, and by most measures, his first start since the 2021 game against Texas was underwhelming.

He acknowledged there are things to fix.

“As a group, myself, everybody, we always want to clean stuff up,” he said. “It’s game one, and everyone has stuff to clean up after week one. We’re going to take a big jump this week.”

His test gets a little tougher Saturday. Rattler and the Gamecocks visit No. 16 Arkansas in the SEC opener for both teams. Arkansas coach Sam Pittman is not underestimating Rattler, who was generating some Heisman Trophy buzz heading into last season, and he led Oklahoma to a Cotton Bowl win over Florida after the 2020 season.

“He plays like a guy that’s played before, you know, experienced, a lot of poise, can feel his confidence through the film," Pittman said.

Arkansas has a quarterback it feels good about, too. The Razorbacks hosted a Cincinnati team that hadn’t lost a regular-season game since 2019 and KJ Jefferson’s f our touchdowns helped the Hogs pull out a gutsy 31-24 win to open the season.

“To be that big — people just bounce off him back there,” Beamer said. “And the way he’s able to run the football like he does, but then also in the passing game be able to sit back there and take hits and throw the ball downfield, or to have people bounce off him and he’s able to scramble but keeps his eyes downfield and is able to throw. We’d have to take, I don’t know who, one of our defensive ends and make him a quarterback (to mimic Jefferson accurately).”

Pittman has full confidence in his junior signal caller.

A key to the South Carolina victory a week ago was superb special teams play.

The Gamecocks blocked two punts, both returned for touchdowns, and scored the game’s first points after a converted fake field goal picked up a first down. Junior Kai Kroeger averaged 49 yards on seven punts, including a career-best bomb that went 79 yards.

Mitch Jeter also made two field goals of more than 50 yards, with a long of 53.

Virginia Tech coach Frank Beamer, the father of Shane Beamer, became known for highlighting the importance of special teams and the “Beamer Ball” philosophy hasn’t fallen far from the tree.

“We always want to be aggressors on special teams,” Shane Beamer said.

The matchup will feature the two highest-rated recruits in the Oklahoma Sooners’ 2019 recruiting class, Arkansas wide receiver Jadon Haselwood and South Carolina’s Rattler. Both spent two seasons with Oklahoma before transferring this offseason. The two connected for 25 completions, 212 yards and two touchdowns while with the Sooners, with both scores coming in a 76-0 victory in 2021 over Western Carolina.

Upon joining the Southeastern Conference in 1992, Arkansas and South Carolina were placed in an annual cross-divisional game. That ended in 2013 when Missouri and Texas A&M joined the conference.

When the teams meet Saturday, it will end the series’ largest gap since they joined the SEC. The last meeting came in 2017, a 48-22 South Carolina victory. The last time South Carolina played at Arkansas (2011), the eighth-ranked Razorbacks toppled the No. 10 Gamecocks 44-28. It’s the last time a top-10 matchup was played inside Razorback Stadium.

Arkansas rushed for 224 yards against Cincinnati, led by 117 from Raheim Sanders.

South Carolina struggled against the run in 2021, and Georgia State rushed for 200 yards in the opener. Behind a veteran offensive line, which paved the SEC’s leading rushing attack a year ago, expect Arkansas to be run-heavy Saturday.