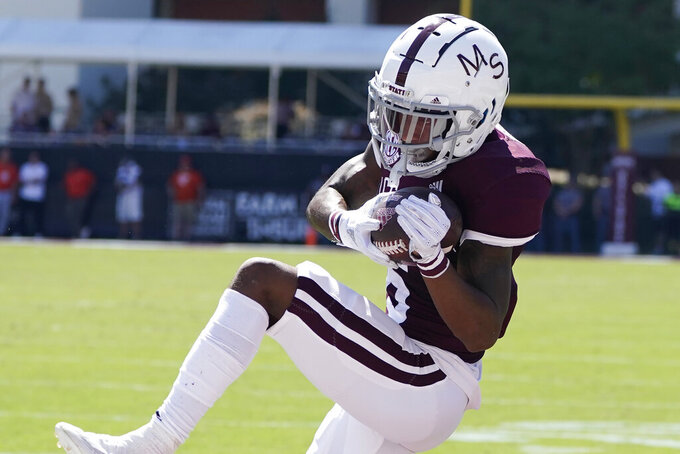 Having seen his team regain its swagger since an upset loss, Jimbo Fisher now wants consistency from No. 17 Texas A&M.

That will be important on Saturday when the Aggies (3-1, 1-0 SEC) visit Mississippi State (3-1, 0-1). Last fall’s 26-22 loss in College Station showed the Bulldogs can take advantage of chances, and A&M certainly doesn’t want a repeat of that.

“We’ll have to play a great game on the road and be ready to play,” said Fisher, whose team begins a three-game road stretch of conference play. “But at the same time, we’ve got to keep grinding and we’ve got to learn to practice not harder, but smarter and better. And be more efficient in the things we do.”

It required overcoming a 14-0 hole with 23 consecutive points. Mindful of MSU’s potential to pile up yards and points, the Aggies ope to slow down the pass-heavy scheme with their 10th-ranked passing defense (153.2 yards allowed per game).

The Bulldogs are seeking their first SEC win after letting LSU off the hook two weeks ago.

The Bulldogs scrubbed that disappointment from their minds with a 45-14 rout of Bowling Green. Quarterback Will Rogers threw six touchdowns to match his own school mark set last season.

The junior also completed 39 of 50 passes for 409 yards, a big rebound from his struggles in Baton Rouge. But Rogers is only as effective as his protection, which is among several areas where Bulldogs coach Mike Leach wants improvement.

“I’d like to improve on the offensive line, the defensive line,” said Leach, whose team is a slight favorite. “I’d just like to see us play with lower pads, just (play) together more and get better. That’s the most important thing, to control the line of scrimmage.”

Rogers leads the SEC in several passing categories including yardage (346 per game) and TDs (16). The Aggies were able to sack him three times, but know they must limit his multiple receiving options to have a chance.

“We know we’re going to get the rush up front, and as a back end we have to execute,” A&M defensive back Jaylon Jones said. “We know they like to throw the ball. They’re the Air Raid offense. It’s going to come down to us doing our jobs.”

Mississippi State junior Emmanuel Forbes remains one of the SEC’s best defenders, ranking sixth with four passes defended including an interception. He’s third among active conference players at 0.82 pass breakups per game and second in interceptions at 0.32.

Aggies receiver Ainias Smith is out for the season with a lower body injury sustained against Arkansas. The senior’s 291 yards and two touchdowns lead the team, and he was nearing several milestones before the injury. Freshman Evan Stewart (13 catches, 141 yards, one TD) and sophomore Moose Muhammad III are the Aggies’ other starters.

MSU leads 8-7 on the field, though the NCAA vacated its 2018 victory in a series that dates back to 1912. The Bulldogs have won four of the last six meetings and three of the last four when Texas A&M was ranked. The teams have split four games in Starkville, with A&M winning their previous visit two years ago.