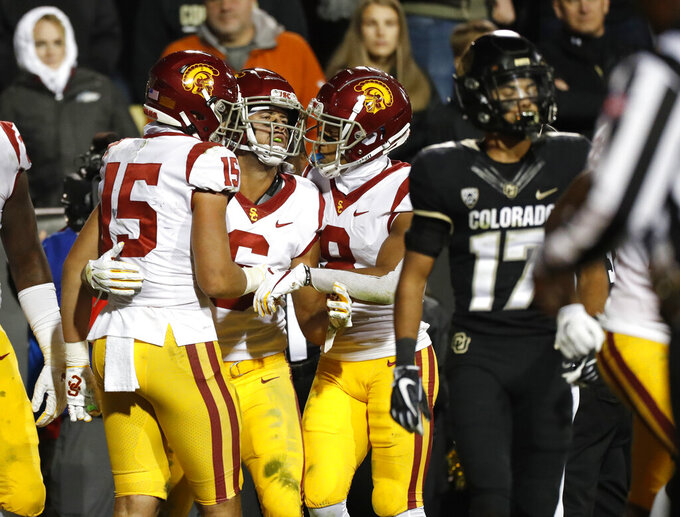 LOS ANGELES (AP) — With a swell of momentum from seven straight victories, the route to the College Football Playoff is increasingly clear for No. 7 Oregon.

In fact, the Ducks might be facing the biggest remaining obstacle in their path Saturday night when they visit Southern California, which still has Pac-12 title plans of its own.

Oregon (7-1, 5-0 Pac-12) will attempt to keep rolling against the Trojans (5-3, 4-1), who are unbeaten at home this season. While the Ducks look more polished and better poised than up-and-down USC, no program takes a trip to the Coliseum lightly — particularly a team stacked with California-grown talent like the Ducks.

"We recruit Los Angeles so hard, and we love it, and we're going to continue to do so," Oregon coach Mario Cristobal said. "I think the juice behind going home to play is going to naturally be there."

Both of these programs have a fraction of their onetime fearsomeness, but the Ducks appear to be building something impressive in Cristobal's second season. Much of that success is built on recruiting in California, the home of a whopping 48 Ducks attracted to the school facetiously known down here as the University of California at Eugene.

With the Trojans in a state of uncertainty following last year's 5-7 finish and this year's inconsistent results, Cristobal's staff is making big gains among LA-area high schoolers. Along with the obvious implications on his job and the Trojans' season, coach Clay Helton could desperately use a victory over the Ducks to show recruits that USC still belongs among the West Coast elite.

"It will be a great atmosphere, and I'm sure our guys will be up for it and excited, because it is a pretty big game," USC offensive coordinator Graham Harrell said. "If they just relax and play, we've got a ton of confidence in them."

The Ducks haven't lost since their season opener against Auburn, but they also haven't been dominant recently.

They had to rally from 14 points down in the second half to get past Washington, which beat USC last month. Oregon then needed a short field goal as time expired to outlast Washington State 37-35 at home last week.

USC finished the brutal first half of its schedule at 3-3, but has reeled off wins over Arizona and Colorado to start the second half. The Trojans rallied from a late deficit at Boulder last week with a tenacity that impressed their coaches.

Not many defenses have had much luck slowing down USC's trio of elite receivers, but Cristobal hopes Oregon can do it with a group of top-class defensive backs. The Ducks lead the nation with 14 interceptions, and their turnover margin is the Pac-12's best as well. The Trojans will attempt to get the ball to Michael Pittman Jr., Amon-Ra St. Brown and Tyler Vaughns as frequently as possible, particularly with injuries to their top three tailbacks. "We've got to take care of the football and don't press," Harrell said.

Justin Herbert started at the Coliseum during the schools' last meeting in 2016, but the freshman passed for just 162 yards and was outclassed by Sam Darnold in the Trojans' comfortable win. Herbert returns to LA as an elite NFL prospect and arguably the nation's top quarterback, throwing 21 touchdown passes against just one interception this season.

The freshman starting quarterback in this Oregon-USC matchup is Kedon Slovis, the Trojans' 18-year-old surprise contributor. He ranks sixth in the nation by completing 72.3% of his passes, and he sits 10th in passing efficiency along with 13 touchdown passes and five interceptions. Harrell believes Slovis took a significant step forward last week in Colorado when he threw for career highs of 406 yards and four touchdowns and led the Trojans' late rally despite a couple of major mistakes on the final drive. The Trojans also noticed that Washington and Washington State both threw the ball impressively against Oregon.

Oregon has one of the nation's most impressive offensive lines, with four senior starters producing dominant play in both the rushing and passing games. Running back C.J. Verdell even took over the Pac-12 lead last week with 753 yards on the ground after racking up 257 against the Cougars. USC's defensive front has been quite good at times, particularly against strong running teams like Stanford and Utah, but injuries for both starting defensive ends have limited its full effectiveness. The Trojans got good news this week when senior defensive end Christian Rector declared himself healthy enough to play this week after missing two games to rest a high ankle sprain. But USC is still without big-play defensive end Drake Jackson and standout safety Talanoa Hufanga.