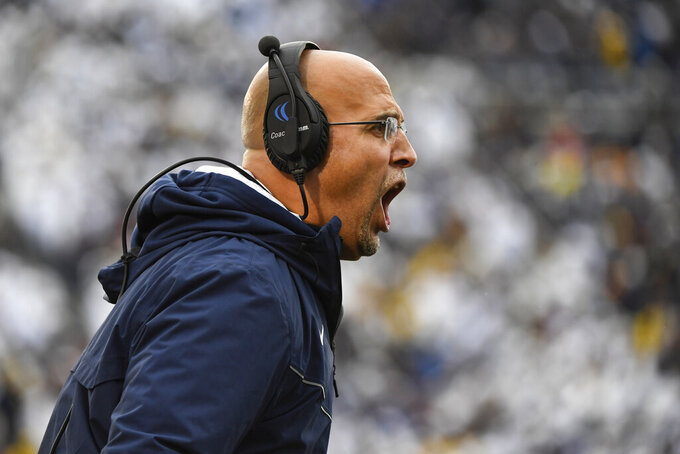 That's why Penn State’s star safety decided to return this year. He simply couldn’t stomach the Nittany Lions' 4-5 effort a year ago.

“I didn’t want my name behind that,” Brisker said.

He certainly doesn’t want to go out on the Nittany Lions’ current trajectory, either.

They’ve lost four of five, including two in row at Beaver Stadium, where Rutgers will visit on Saturday.

While Penn State (6-4, 3-4 Big Ten) has won 15 straight games against the Scarlet Knights (5-5, 2-5), this group of Nittany Lions should know better than most that success isn’t guaranteed.

Three of their four losses this season have come by four points or fewer. Penn State put up a fight into the fourth quarter against No. 5 Ohio State but fell 33-24. Illinois won in nine overtimes. No. 18 Iowa needed a fourth-quarter comeback. No. 8 Michigan scored a long touchdown late last week.

Now a team that had playoff hopes after a 5-0 start just wants to recoup some positivity with two games left.

“Two, three, four plays,” defensive end Arnold Ebiketie said. “Those things just keep occurring and that’s the main reason we lost those games and those are just some of the plays that we have to have if we want to be where we want to be.”

Those plays could come easier against Rutgers than they did against Michigan.

Although they’ve won two of three, the Scarlet Knights have been hit or miss on defense. They’re allowing 371 yards per game and surrendering just 22 points but have been vulnerable to big plays, allowing 49 plays of 20 or more yards.

They’ll need to tighten up to earn their first bowl appearance since 2014.

Rutgers coach Greg Schiano, who got his start as an assistant at Penn State, hopes his team can block out the noise that comes with playing in one of the nation’s biggest venues.

The Scarlet Knights are 5-0 on the season when don’t turn the ball over. They have 10 combined turnovers in their five losses.

Ever since Penn State quarterback Sean Clifford suffered an unspecified upper body injury at Iowa on Oct. 9, his rushing numbers have dropped off considerably.

That changed out of necessity against Michigan, but it didn’t happen exactly how offensive coordinator Mike Yurcich drew it up.

While Clifford logged 16 carries, only a handful were designed runs, and he was sacked seven times. He did run for 44 yards on scrambles, however.

“He’s battling his tail off,” Penn State coach James Franklin said. “I love him and I’m super proud of him and I know he’s going to have a great week of practice this week. I know he’ll do the same thing and play his tail off on Saturday.”

This matchup pits one of the cleanest Big Ten teams against one of the sloppiest.

Rutgers comes in with just 42 penalty yards per game while the Nittany Lions have 52. Penn State had committed at least seven penalties for 54 yards in each of its last four before cleaning up with just four infractions against Michigan.

Senior day has become a tricky ceremony to plan since the NCAA awarded all athletes an extra year of eligibility because of the coronavirus pandemic.

A handful of Penn State players are expected to make what could be their final home starts on Saturday.

A similar situation arose last year when Penn State starters Tariq Castro-Fields and Jaquan Brisker took the Senior Day walk before opting to return for this season. Because last season technically didn’t count against their eligibility, a bunch of seniors could return for the extra year.

“It’s just kind of a mess to predict,” Franklin said. “You can’t use any of the old data that you’ve studied over the last 10 years to make predictions. It’s really challenging and I think sitting down with our compliance department and going through that in detail, I think, was eye-opening to them on how messy it is.”