Petrino in spotlight as Missouri State visits No. 5 Oklahoma 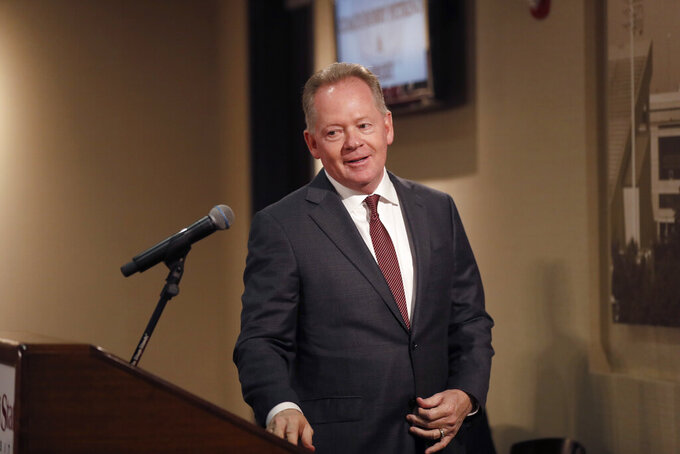 FILE - Bobby Petrino steps to the podium as he is introduced as the new football at Missouri State during a news conference Thursday, Jan. 16, 2020, in Springfield, Mo. The controversial coach will open his first season guiding Missouri State, a Football Championship Subdivision program, on Saturday night, Sept. 12, 2020, at No. 5 Oklahoma. (AP Photo/Jeff Roberson, FIle)

Oklahoma wants to establish freshman Spencer Rattler at quarterback. He was the consensus No. 1 quarterback nationally in the 2019 recruiting class and is the Big 12’s Preseason Newcomer of the Year. Bobby Petrino will open his first season as Missouri State’s coach with nothing to lose against the Sooners.

Oklahoma: RB T.J. Pledger. Injuries have kept the junior off the field at times during his career, but he is the No. 1 back heading into this season, and coach Lincoln Riley has raved about his consistency in practice. With an experienced line in front of him and a new quarterback, he could post some big numbers.

Missouri State: QB Jaden Johnson. He will be Missouri State’s school’s first freshman to start at quarterback since 2011. Johnson redshirted at Southern Mississippi last season. He was rated the No. 20 pro-style quarterback in the nation by 247sports.com his senior year of high school in Memphis, Tenn. He was rated a four-star prospect by ESPN.

Petrino has never coached against Oklahoma. He’s 4-3 in his career against the Big 12. ... Missouri State’s Jordan Murray has a reception in 21 consecutive games. ... Riley turned 37 on Sept. 5. He’s the fifth-youngest coach in the FBS. ... Oklahoma has beaten its last five FCS opponents by a combined score of 309-29. ... Oklahoma kicker Gabe Brkic made all 69 of his combined extra points and field goals last season.