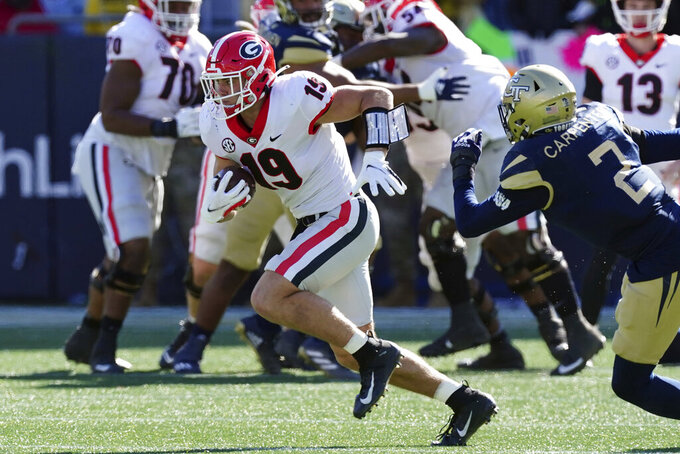 Georgia tight end Brock Bowers (19) runs for a touchdown after a catch as Georgia Tech defensive back Tariq Carpenter (2) gives chase in the first half of an NCAA college football game Saturday, Nov. 27, 2021, in Atlanta. (AP Photo/John Bazemore)

Line: Georgia by 6 1/2, according to FanDuel Sportsbook.

Alabama is playing for a spot in the College Football Playoff, though it is possible the Crimson Tide could make the four-team field even with a loss to the Bulldogs. Georgia is playing to protect its No. 1 ranking in the playoff but likely is assured of a spot even if its loses to Alabama.

Alabama LB Will Anderson Jr. vs. Georgia's offensive line. Anderson is tied for the national lead with 14.5 sacks and his 30.5 tackles for loss are 8.5 more than any other player. Georgia's offensive line has provided QB Stetson Bennett with good protection despite senior LT Jamaree Salyer missing the last four games with a foot injury. Freshman Broderick Jones has gained valuable experience as the fill-in starter for Salyer. Georgia, which has allowed only eight sacks, will need its best blockers against an Alabama pass rush led by Anderson.

Alabama: RB Brian Robinson Jr. ranks third in the SEC with 1,016 yards rushing, but his status is uncertain due to a left leg injury. Robinson has rushed for 14 touchdowns and has added 29 catches for 252 yards and two touchdowns. Robinson's production, and Alabama's lack of depth at the position, makes his status crucial to the Crimson Tide's hopes.

Since 2006, the only year the winner of the SEC championship game did not play in the national championship game was in 2014. ... Alabama is playing for its 29th SEC championship and third in the last four years. Georgia is playing for its 14th SEC title and first since 2017. ... Alabama's six consecutive wins over Georgia include two in the SEC championship game. The Crimson Tide took a 41-24 home win over Georgia last season. ... This is the fourth consecutive season the nation's top-ranked team has played in the game. ... Georgia leads the nation in scoring defense, allowing 6.9 points per game. The Bulldogs closed the regular season with their third shutout, a 45-0 win over Georgia Tech. ... Georgia trailed only four times this season, including only once after the first quarter and never in the second half. ... The Bulldogs were undefeated in the regular season for the first time since 1982 and are 12-0 for the first time since their 1980 national championship season.