Rutgers on cusp of bowl-eligibility after win at Indiana 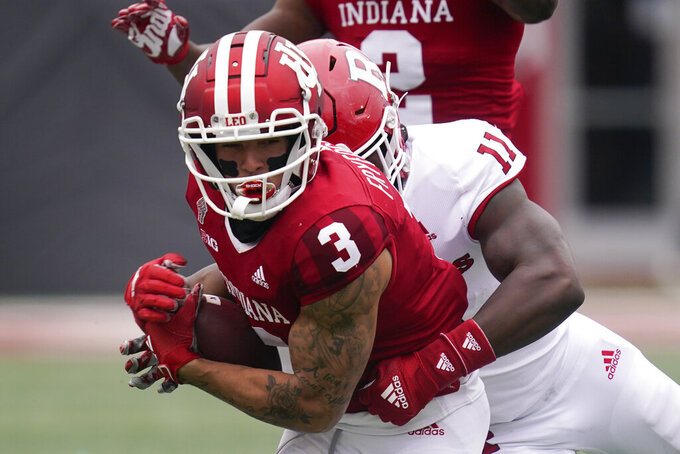 Isaih Pacheco scored twice in the first quarter and Rutgers scored 17 points off turnovers, routing Indiana 38-3 to move within one win of becoming bowl eligible for the first time since 2014.

“I'm excited, our guys are fighting," Schiano said. “We want to write that story at the end of the year and now we have a chance. We'll see what we can do."

It was their most lopsided victory in conference play since joining the Big Ten — easily surpassing the previous mark of 22 points against Indiana in 2015. Now comes the hard part — beating either No. 23 Penn State or Maryland to finish the job.

Rutgers earned some style points, too, when quarterback Noah Vedral threw a backward pass to offensive tackle Raiqwon O'Neal, who caught the ball around the 12-yard line and dove toward the pylon for a 7-yard TD run and a 31-3 lead in the third quarter.

O'Neal has converted that play into a score twice in two years.

“I couldn't do it without my guys up front," O’Neal said. “They made a great block for me to get in there."

It was yet another frustrating game for the Hoosiers (2-8, 0-7), who started the season ranked No. 17 and embracing the highest expectations in decades.

But not much has gone right this season, and this game slipped away fast, too.

“It was just a bad exchange," McCulley said. “That just set the tone for the rest of the game and it was hard to come back from that.”

Pacheco's 3-yard scoring run late in the first quarter made it 14-0 and Tyreem Powell's interception led to a 38-yard field goal that made it 17-0 less than a minute into the second quarter.

All the Hoosiers could muster was a 47-yard field goal to close the half.

Rutgers sealed it early in the third quarter when Ty Fryfogle fumbled a punt at the Indiana 10 and Aaron Young scored on the next play to make it 24-3.

Rutgers: On a day the offense didn't do much, the defense and special teams made the game-changing plays. As a result, Rutgers is still in bowl contention despite losing five of seven.

Indiana: This was the Hoosiers' worst game in what has been an awful season. Indiana just couldn't execute on offense or defense Saturday.

Indiana: McCulley was 7 of 20 with 98 yards and lost two fumbles. ... Jack Tuttle was 5 of 10 with 26 yards and two interceptions. ... The Hoosiers rushed 32 times for 85 yards and finished with 262 total yards. ... Indiana has failed to score a touchdown in three games this season. .. The Hoosiers had won the previous five in this series.

Indiana: Running back Stephen Carr and linebacker Cam Jones both sat out and although Tuttle returned to action in the first quarter, he didn't last long. Tuttle hurt his left ankle on his second interception, went to the locker room and did not return. Center Dylan Powell injured his left shoulder in the first half and safety Raheem Layne was shaken up late.

Indiana: Closes its home season next Saturday against Minnesota.