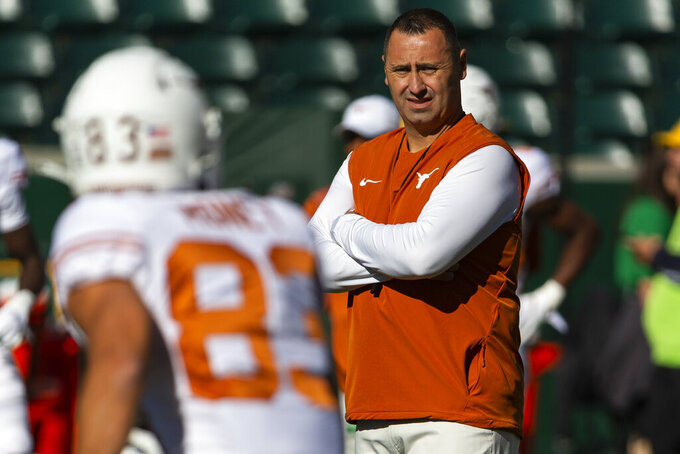 Iowa State's win over Texas last year was one in a line of hard-earned pelts collected during the Cyclones' dream season and helped pave the way to their first appearance in the Big 12 championship game.

For the Longhorns, the loss helped seal the fate of coach Tom Herman, who was fired five weeks later.

The teams square off again Saturday night in Ames, Iowa, and both again have arrived at critical points in their seasons.

Iowa State (5-3, 3-2 Big 12) almost certainly needs to win out and get lots of help from other teams to fulfill preseason predictions of a return to the conference title game. Texas (4-4, 2-3) is on a three-game losing streak under first-year coach Steve Sarkisian and trying to avoid its longest since Mack Brown's 2010 team dropped four in a row.

“When you think about big picture, there’s never been a great triumph without a struggle,” Sarkisian said. “At some point, to triumph and do something special, you have to struggle. And clearly we’re in the midst of the struggle. The only way to get over that hump and to get through it is to have grit and determination and perseverance and then ultimately break through, and I believe that we will.”

Defensive lineman Moro Ojomo preached patience but also said he and his teammates must not become numb to losing.

“First of all, when you think about dynasties, dynasties are built over time,” Ojomo said, according to the Austin American-Statesman. “If we’re being completely honest, this atmosphere is, in a way, a bit of an impatient atmosphere. I mean, I can understand why. It’s 100,000 people, we’ve got the sixth-most millionaires in the U.S. We’ve got a lot of people, a lot of power behind it. But nothing happens overnight. Amazon wasn’t built overnight.”

Last year in Austin, Iowa State won 23-20 after trailing 20-10 in the third quarter. Breece Hall's late touchdown put the Cyclones in front, and the Longhorns missed what would have been a tying 58-yard field goal as time ran out.

Iowa State plays two of its last three games on the road and already has losses at Baylor and West Virginia. That makes Saturday a must win.

“The character of your football team is always tested this time of year,” coach Matt Campbell said. “The reality is everything we still want is right out in front of us. I’ve always believed you get as your work deserves and we’re going to find out what our work has deserved us to be or where it’s allowed us to be when the season comes to an end.”

The game features the Big 12's top two running backs in Iowa State's Hall and Texas' Bijan Robinson. Hall averages 123.1 yards per game and has gone over 100 yards in five of the last six games. Robinson averages 120.9 yards per game and had a streak of five 100-yard games end when he was held to a season-low 43 by Baylor last week.

Hall has scored at least one touchdown in 20 straight games, the longest active streak in the nation and a Big 12 record. Robinson has scored in 10 games in a row, the second-longest streak.

Iowa State linebacker Mike Rose is expected to return after missing last week's game at West Virginia with what Campbell described as a nerve issue. Rose is the reigning Big 12 defensive player of the year.

“Mike Rose has been a staple in our football program for a long time,” Campbell said. “We are a better team with Mike Rose than we are without him, for sure.”

Sarkisian said he planned to continue starting Casey Thompson at quarterback. Thompson threw an interception inside the Baylor 25 late in the first half last week and was just 11 of 22 in the second half of the 31-24 loss.

Iowa State defensive lineman Will McDonald IV needs one sack to break JaQuan Bailey's school career record of 25.5 from 2016-20. McDonald is second in the Big 12 with 7.5 this season.