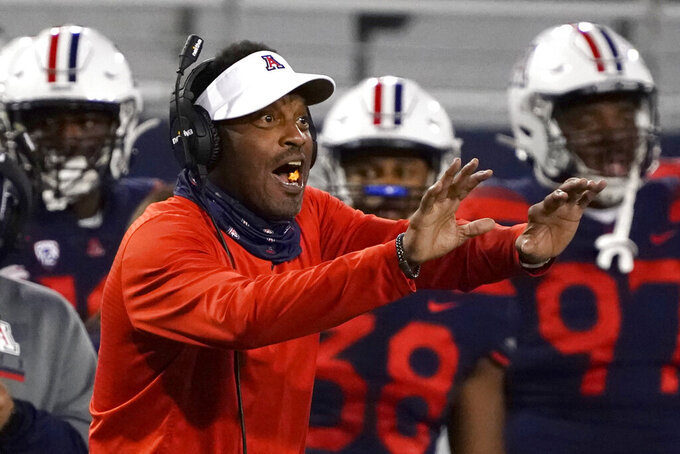 In this Friday, Dec. 11, 2020, photo, Arizona coach Kevin Sumlin reacts during the first half of the team's NCAA college football game against Arizona State in Tucson, Ariz. Arizona fired Sumlin on Saturday, Dec. 12, a day after a 70-7 loss to Arizona State extended the Wildcats' losing streak to a record 12 games over two seasons.(AP Photo/Rick Scuteri)

While the comings, goings and stayings of coaches stole attention from the games on this college football Saturday, it was impossible not to notice what was happening to Miami.

In what was the only matchup of this weekend of teams ranked in both the AP Top 25 and the College Football Playoff rankings, No. 20 North Carolina put a historic beating on the No. 9 Hurricanes.

The 62 points the Tar Heels dropped on Miami are the most the Hurricanes have allowed since 1998 and UNC running backs Michael Carter and Javonte Williams combined for 544 yards rushing, a major college football record for teammates.

'Canes coach Manny Diaz referred to it as a butt-kicking, but not quite so politely. “A humiliating performance,” he added.

Miami has spent much of Diaz's second season in and around the top 10 of the rankings. A victory against North Carolina would have all but locked up a New Year's Six bowl bid for the Hurricanes. This year was looking like a nice bounce-back for the program after a mess of a 2019 season that ended with a shutout loss to Louisiana Tech in the Independence Bowl.

The Hurricanes have felt a little fraudulent since getting blown out by Clemson on Oct. 10. Miami wasn't back, but behind quarterback D'Eriq King the ’Canes were beating the teams they should beat. Progress.

A loss like Saturday's feels like getting sacked for a 20-yard loss. Miami fans are well past the point of being reasonable about their once-great program and being a hometown guy is not going to buy Diaz much slack. He's not going anywhere, but he will head into his third season still trying to prove himself.

Give credit to North Carolina, of course. That offense is one of the best in the country and both of those running backs are likely to be drafted. The Tar Heels had puzzling losses against Virginia and Florida State, but tearing apart the Hurricanes probably opens the door to an Orange Bowl bid as the Atlantic Coast Conference's representative if both No. 2 Notre Dame and No. 4 Clemson end up in the playoff.

A huge missed opportunity for the Hurricanes, who have managed to make 8-2 feel like a disappointment.

The tossed shoe penalty that led to LSU's upset of No. 6 Florida will go down in SEC history and turned an otherwise dull slate of games interesting.

The absurd mistakes are part of what makes college football great.

Ostensibly, Florida's loss was crushing to the Gators' playoff hopes and a huge potential headache for the selection committee if Florida beats Alabama in next week's SEC championship game.

“I guess the best thing to do would have been to play less games because you seem to get rewarded for not playing this year,” Florida coach Dan Mullen said, clearly taking a swipe at Ohio State (5-0 and No. 4 in the CFP rankings).

Stop right there. Let's talk about the key component of any hope Florida had of making the playoff: beating No. 1 Alabama. Even before the Gators took the field Saturday night, oddsmakers had them as a 20-point underdog to the Crimson Tide.

It's hard to get too worked up about Florida's loss to LSU — as oddly entertaining as it was — and its impact on the playoff race when Alabama just rolled through a 10-0 SEC season by an average margin of 32 points.

No. 16 Southern California wrapped up the Pac-12 South and a spot in the conference title game with yet another last-minute comeback, this time against a much-improved UCLA.

“The entire second half I never saw one kid give up fighting,” USC coach Clay Helton said.

USC (5-0) is scheduled to face Washington, but COVID-19 might have other ideas. The Trojans were 15th in the last playoff rankings and their great escapes against underwhelming competition make it hard to imagine a big surge is coming.

But if 6-0 is good enough for Ohio State to get in, and it might be, why not consider USC if Notre Dame beats Clemson for a second time?

If the alterative is putting No. 5 Texas A&M, which we already saw get pummeled by Alabama, in the playoff, the selection committee might as well throw USC and even No. 8 Cincinnati in there if they win their conferences.

This elongated regular season has caused the silly season of coaches getting hired and fired to overlap with the last couple weeks of games.

And with the early signing period starting Wednesday, there is not a lot time for schools to ponder their next moves or plod through a search.

Sumlin's fate was sealed Friday night when the Wildcats lost 70-7 to Arizona State. It never worked for the former Texas A&M coach in Tucson and he leaves with about $7 million in buyout money to add to the $10 million and change he got from A&M.

Jones was one of three head coaches hired by Group of Five schools on Saturday. He landed at a solid Sun Belt program after spending three seasons in Nick Saban's reputation rehab for former head coaches at Alabama.

Jones' time at Tennessee will be best remembered for thin skin, corny sayings and lack of player development, but his overall resume is pretty good.

He replaces Blake Anderson, who left for Utah State. Anderson did a good job in Jonesboro over seven seasons, but it was definitely time for a change personally and professionally. Anderson lost his wife, Wendy, last year after a long bout with cancer.

South Alabama hired promising Indiana defensive coordinator Kane Wommack in a search that focused on no one but him from the start.

But the biggest news was a coach keeping his job. Texas AD Chris Del Conte released a statement “reiterating” that Herman is the coach and saying how much the school was looking forward to the future while also being disappointed with this season's results.

Simply put, Texas would be on the hook for more than $20 million to get rid of Herman and his staff. Without a slam-dunk replacement — like, say, Urban Meyer — Longhorns leadership did not want to spin the wheel and hope to find another coach.

It's hard to blame Texas. Herman is 31-18 with one Big 12 title game appearance and one victory against Oklahoma. But to think the next guy will surely do better is wishful.

Look at where Nebraska is three years into Scott Frost's tenure. Justin Fuente looked like a perfect fit at Virginia Tech and five years later that relationship is tenuous.

There are no sure things, and Herman has done better than some of the other coaches who were supposed to be.

AROUND THE COUNTRY: Next season can't get here fast enough for Georgia fans. The Bulldogs have looked transformed with J.T. Daniels at quarterback and George Pickens on the receiving end of the former five-star's passes. ... Ball State won the Mid-American Conference's West division, but the final play of the game likely gave Cardinals fans heart palpitations and memories of the band being on the field in Stanford-Cal. ... Football fans likely felt their age watching No. 21 Colorado, which got two long touchdowns from receiver Brenden Rice, the son of NFL great Jerry Rice, in a loss to Utah. ... Earlier in the week both Pitt and Boston College announced they would not be going to bowl games, instead allowing their players to reconnect with their families after a long season in COVID-19 protocol. It feels like a lot of teams are dragging to the finish line. Minnesota was missing 33 players against Nebraska. Vanderbilt had only 18 scholarship defensive players available against Tennessee. Baylor had more than 40 players, staffers and coaches missing against Oklahoma State. Cal was forced to cancel its game at Washington State two hours before kickoff. This season has has been exhausting for everybody involved.