Unbeaten Bearcats put No. 2 ranking on the line at Navy 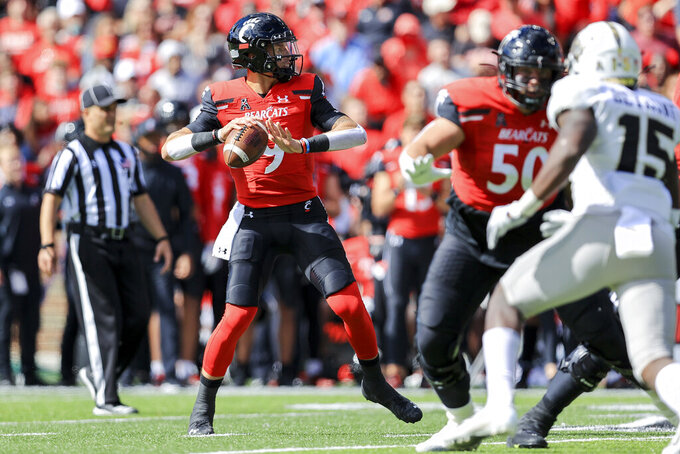 Cincinnati quarterback Desmond Ridder (9) throws a pass for a touchdown during the first half of an NCAA college football game against UCF, Saturday, Oct. 16, 2021, in Cincinnati. (AP Photo/Aaron Doster)

Up next is Navy — and although the Midshipmen aren't having a good season, they always present some challenges for whoever is preparing to face them.

“Now we get a chance to really kind of move on to something completely different," Fickell said. "For those of you that have never prepared for a triple-option team, it is quite a unique week.”

It's unique for a variety of reasons. The Bearcats moved up to No. 2 in The Associated Press Top 25 poll Sunday, their best ranking ever and the first time in over a decade that a team from outside the traditional power conferences has been that high. Now Cincinnati plays at Navy on Saturday. It's the first time the Midshipmen are hosting a top-five team since 1984.

“The last three years or so they’ve been the pinnacle of our league," Navy coach Ken Niumatalolo said. "It’s a great opportunity to play against the No. 2 team in the country coming to our house. We recognize that.”

The stakes for Cincinnati (6-0, 2-0 American Athletic Conference) have been clear for a while — at least since the Bearcats won at Notre Dame earlier this month. Keep winning, and an unbeaten record could lead to a spot in the College Football Playoff. Cincinnati can't afford a slip-up, and there's pressure to win as impressively as possible.

Lately, the Bearcats have done just that. After the Notre Dame game, they beat Temple 52-3, then routed Central Florida and new coach Gus Malzahn 56-21. Malzahn made a name for himself via his hurry-up offense. Cincinnati's next opponent obviously has a much different approach.

Navy (1-5, 1-3) did beat UCF as well, and the Midshipmen lost by seven the following week to a nationally ranked SMU team. Navy lost 35-17 to Memphis last week.

Cincinnati had never been higher than No. 4 in the AP poll until this season. The Bearcats moved up to No. 3 last week and then took advantage of second-ranked Iowa's loss.

The last time the Midshipmen hosted a top-five team, No. 2 South Carolina came in undefeated and lost to Navy in 1984. The Midshipmen had a losing record before that game as well.

In 1976, No. 2 Pittsburgh came to play at Navy with a 6-0 record, the same as Cincinnati now. The Midshipmen were 1-5, same as this year. Pitt won 45-0 and stayed unbeaten the whole season, beating Georgia in the Sugar Bowl. Georgia, of course, is the only team currently ranked ahead of Cincinnati.

Cincinnati has scored 50 points in back-to-back games for the first time.

“Watching a little bit of Cincinnati's film, they're well rounded," Navy receiver Mychal Cooper said. "They have a good offense, have a good defense. They practice hard on special teams, they rally to the ball. I think that's what it takes to be No. 2.”

Adding to the challenge of preparing for Navy is that Cincinnati hasn't faced the Midshipmen since 2018. However, the Bearcats won that game 42-0. Ridder had a touchdown pass and a rushing score.