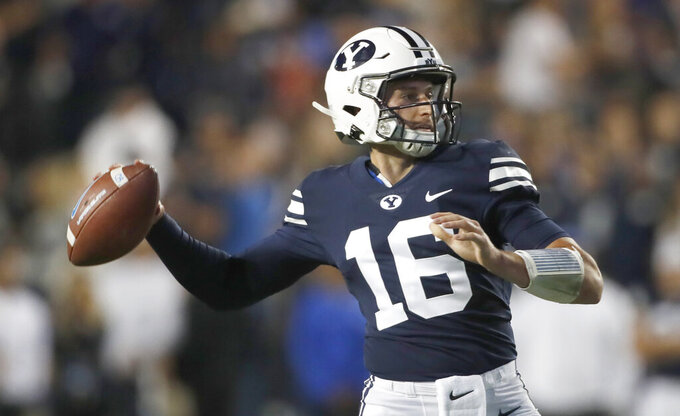 Line: BYU by 8 1/2, according to FanDuel Sportsbook.

The coveted “Old Wagon Wheel" is on the line. It became an iconic part of this in-state rivalry in 1948. The Aggies captured the wheel first, with a 20-7 win on Oct. 23, 1948. The Cougars have held it the last two seasons, though, since they won 42-14 in 2019 and didn’t play last season due to the COVID-19 pandemic. BYU remains one of six teams this season who’ve yet to trail in a game. Utah State is 5-62 all-time against AP-ranked teams. The Cougars are the highest ranked team to pay a visit to Maverik Stadium since No. 6 Boise State in ’09.

BYU quarterback Jaren Hall is expected to return after sitting out a 35-27 win over South Florida due to a rib ailment. Baylor Romney stepped in and threw for 305 yards. The Aggies only get stronger as the game goes along. They’ve outscored teams 54-20 in the fourth quarter.

Utah State: Running back Calvin Tyler Jr. has two straight 100-yard performances. He had a career-best 132 yards at Air Force and then 126 yards against Boise State.