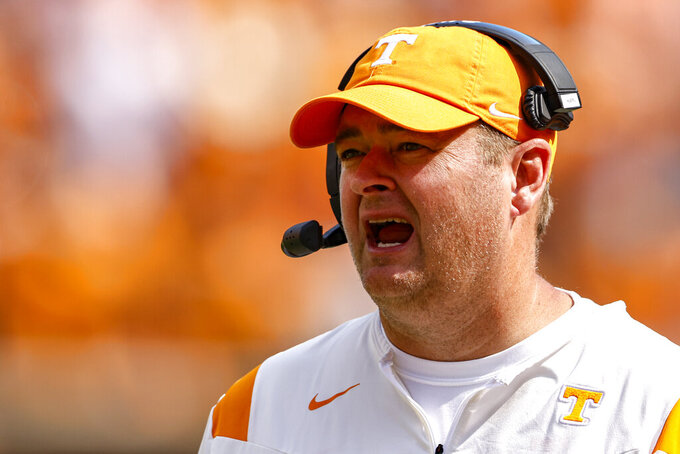 Tennessee head coach Josh Heupel yells to his players during the second half of an NCAA college football game against Pittsburgh Saturday, Sept. 11, 2021, in Knoxville, Tenn. (AP Photo/Wade Payne)

KNOXVILLE, Tenn. (AP) — Tennessee appears to have another quarterback quandary on its hands, not that coach Josh Heupel is tipping his hand just yet.

Heupel won’t say whether Joe Milton or Hendon Hooker will start for Tennessee on Saturday against Tennessee Tech. The first-year coach also isn’t saying if Milton is physically available after going down with what appeared to be a lower leg injury when sacked in the second quarter of a 41-34 loss to Pitt.

“I don’t consider (the quarterbacks) adversity,” Heupel said. “Watching the video, Joe knows this too, there are opportunities to make some plays in the pass game that were certainly there. Multiple occasions where we’re running free in the secondary and there’s nobody relatively close at this level of play against a good defense.”

Milton has shown off his strong arm in his first two starts. He was 7 of 12 passing for 50 yards and had a 54-yard run when he left the game. However, he also overthrew two open receivers on deep balls.

Hooker went three-and-out after replacing Milton. Then he looked like he was in command of the offense, throwing for 188 yards and two touchdowns. Hooker also lost a fumble and was intercepted once. Hooker also ran nine times for 49 yards.

Heupel’s decision will be geared more for the program’s big picture than what’s best Saturday against an FCS program. Tennessee Tech has lost its first two games by a combined score of 78-14, the last a 26-0 loss to Furman.

This is the last chance for the Volunteers (1-1) to work out some issues before opening the Southeastern Conference portion of the season Sept. 25 at No. 11 Florida. Heupel wants to control “the controllables.”

“That’s where we have to continue to get better,” Heupel said. “This week, as much as it is about any opponent, it’s always true, it’s really about yourself. As we continue to build this program, getting the foundational pieces right is really important.”

When Tennessee comes out in its up-tempo offense, it won’t be the first one the Golden Eagles have seen this season. Samford generated 52 points with that style of attack in the opener.

“Snap it quick and get on the line,” said Tennessee Tech coach Dewayne Alexander. “The key is the tempo. They try to get you out of whack; get your eyes in the wrong place; miss a tackle in space.”

Heupel said the paperwork issue with the NCAA involving the eligibility of linebacker Byron Young has been resolved, and he is expected to play Saturday.

“Through training camp, through spring ball, (he) has been really good as a pass rusher off the edge,” Heupel said. “I think he’s going to add some things we need on that side of the football.”

Alexander has heard enough about Young to say, he is “supposed to be a difference-maker.”

The Volunteers may still be looking for their first takeaway of the season. They are making their presence known in other ways. Tennessee is averaging 10 1/2 tackles for loss in its first two games. Alexander says the Vols’ defense plays with a lot of emotion and celebrate good plays.

The average college football game lasts 3 hours, 24 minutes. There was nothing average about Tennessee’s loss to Pitt. Tennessee allowed 27 points in the second quarter. Add in a combined 70 passes, 22 penalties, several official replays and countless players struggling with cramps, the game was 1 minute shy of 4 hours.