Winless Cal looks to get on track vs. Sacramento State 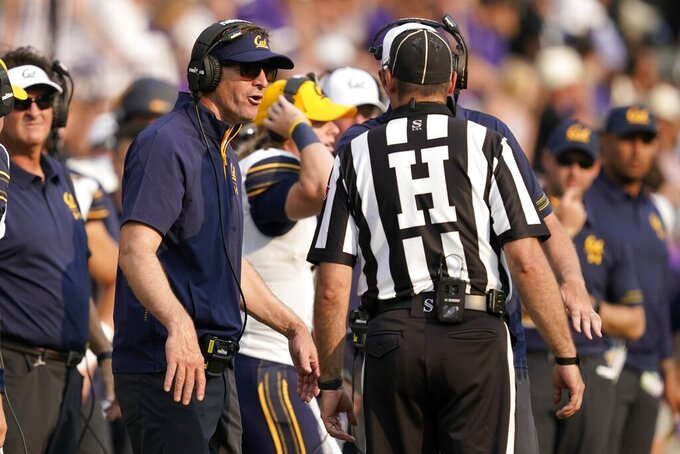 California head coach Justin Wilcox, left, speaks to an official during the second half of an NCAA college football game against TCU in Fort Worth, Texas, Saturday, Sept. 11, 2021. (AP Photo/Tony Gutierrez)

BERKELEY, Calif. (AP) — California coach Justin Wilcox finds himself in some unfamiliar territory, still searching for the Golden Bears' first win of the season after a couple of frustrating close losses.

Cal raced through the nonconference portion of the schedule unscathed in Wilcox's first three seasons in Berkeley but now needs a win against FCS-level Sacramento State on Saturday to avoid an 0-3 start.

“There’s a chip on the shoulder for sure and there needs to be with all of us, myself and the coaches,” Wilcox said. “We do this to win and you spend a lot of time and energy and preparation and the guys work out all year and you want to be rewarded for those efforts. We haven’t done enough in the last two weeks to do that so there’s definitely an edge at practice and that’s OK. That’s what we need.”

That's been missing a bit early this season as the Bears (0-2) followed a close loss at home to Nevada in the opener with a frustrating one at TCU last week when they failed to convert a late 2-point conversion in a 34-32 loss in the Texas heat.

Cal blew a fourth-quarter lead by allowing back-to-back TD drives but Wilcox said his players need to overcome the weather conditions in those scenarios.

“There’s no doubt we tackled worse as the game wore on,” he said. “There's probably a number of factors there but our job as a defense is to play well and get off the field and regardless of the circumstances that are out of our control, we have to do that.”

They figure to be able to get things going against the Hornets (1-1), who turned the ball over six times last week in a 34-16 loss to Northern Iowa.

While the Bears lost their first two games in the pandemic-shortened 2020 season that only included games against conference foes, the last time it happened in a normal campaign was in 2001 when they finished 1-10.

Cal quarterback Chase Garbers is coming off his third career 300-yard passing game, having completed 16 of 27 passes for 309 yards and two TDs last week. Garbers had five completions of at least 25 yards in the game and four that gained at least 40, including a 68-yard pass to Trevon Clark that was Cal's longest play from scrimmage since 2017.

Hornets second-year head coach Troy Taylor is a familiar face in Berkeley. Taylor was a four-year starter for the Bears from 1986-89 and his 8,126 yards passing still rank second in school history to Jared Goff. Taylor returned to Cal as an assistant coach from 1996-99 and was the radio analyst for the school from 2005-11.