Alabama, Auburn QBs X-factors in Iron Bowl with Tua out 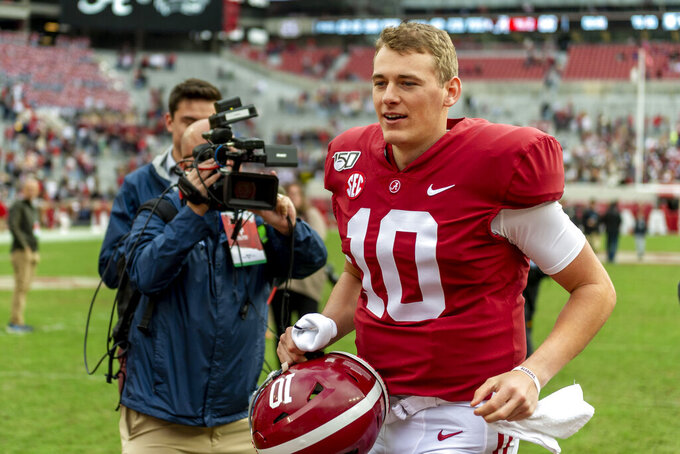 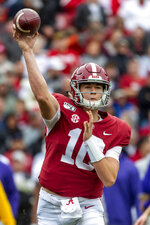 AUBURN, Ala. (AP) — Marlon Davidson would rather Auburn be playing Tua Tagovailoa one more time.

It’s more about the Tigers defensive end’s regard for Tagovailoa than any disrespect to Mac Jones, the star quarterback’s replacement for No. 5 Alabama.

“You always want to play against the best,” Davidson said. “Tua’s the best. Tua is one of the best in the league. Getting a win over Tua at Alabama is a lot more than with Mac at Alabama.

“There’s a difference, because Tua is a dynamic player ... and he deserves a Heisman award, because of what he did last year and what he was doing this year.”

Tagovailoa is recovering from surgery on his right hip instead of leading his team into Jordan-Hare Stadium on Saturday.

That means it will be Jones versus Auburn freshman Bo Nix, who’s suddenly the Iron Bowl’s elder statesman as a starting quarterback. Jones’s inexperience and Nix’s up-and-down first season leaves QB play as a potential X-factor for both the Tide (10-1, 6-1 Southeastern Conference, No. 5 College Football Playoff) and 16th-ranked Auburn (8-3, 4-3, No. 15 CFP).

Jones has performed well in his other two starts, but those came at home against huge underdogs Arkansas and Western Carolina.

Now, he faces one of the SEC’s top defenses and his first hostile crowd as Alabama’s starter.

“He’s played well when he’s had the opportunity to play, and I think the team has confidence in him,” Alabama coach Nick Saban said. “This is going to be the first game he has to play on the road, so it’ll be a little different from that standpoint for him, in terms of game management, things that he has to do to be effective against a very good team.

“But we have every confidence that he’ll be able to manage the game well and do what we need to do to be able to get the ball to the skill players that we have to create balance in the offense.”

Jones has completed 71.4% of his passes — the same percentage as Tagovailoa — for 841 yards with seven touchdowns and one interception.

He’s supported by an array of playmakers led by receivers DeVonta Smith and Jerry Jeudy and tailback Najee Harris.

For Auburn, Nix has been shaky against other top teams but has played better at home.

He has completed just 47.9% of his passes combined against Oregon, Florida, LSU and Georgia. He averaged 181 passing yards in those games with five touchdowns and six interceptions.

“I feel like each one of those games has prepared me for this game,” Nix said. “Each one has gotten a little bit bigger and bigger. Obviously I haven’t played as great in some of them as I would have liked to, but I just continue to grow and get better.

Nix has passed for 2,193 yards and 14 touchdowns against six interceptions. He is also a threat to run at times.

Nix did throw the game-winning touchdown pass in his college debut against Oregon. Tide safety Jared Mayden said from watching that game, “you could tell he plays with a chip on his shoulder.”