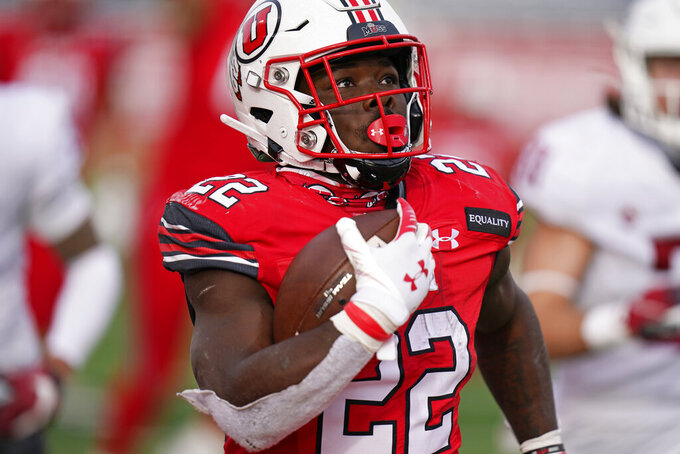 FILE - In this Dec. 19, 2020, file photo, Utah running back Ty Jordan (22) scores against Washington State during the second half of an NCAA college football game, in Salt Lake City. Authorities say Jordan died at a hospital in the Dallas area after accidently shooting himself. University officials announced Ty Jordan’s death Saturday, the day after he was named Pac-12’s newcomer of the year. (AP Photo/Rick Bowmer, File)

DALLAS (AP) — Ty Jordan, a star freshman running back for the University of Utah, died at a Dallas-area hospital after accidently shooting himself, authorities said Sunday.

University officials announced Jordan's death Saturday, a day after he was named Pac-12’s newcomer of the year, but did not release details.

Jordan, 19, died in an emergency room at a hospital in Denton around 10:45 p.m. on Christmas Day, according to medical examiner’s records.

Police officers had responded about an hour earlier to reports of a shooting at a home in Denton, a city 40 miles (64 kilometers) northeast of downtown Dallas. The officers found a man had accidently shot himself in the hip and began giving first aid, Denton police spokeswoman Allison Beckwith told The Associated Press Saturday. She said the man later died at a hospital and that investigators did not know how he came to shoot himself.

Beckwith declined to identify the man by name, but online case records from the Tarrant County Medical Examiner's on Sunday showed it was Jordan.

Jordan's cause of death is listed as “gunshot wound of abdomen" in the records. His manner of death has not yet been released and officials with the medical examiner's office could not be immediately reached for comment Sunday. The Denton police did not respond to a request for comment Sunday.

Jordan came up as a tailback playing in Mesquite, a Dallas suburb about 50 miles (80 kilometers) southeast of Denton.

Jeff Neill, the head coach at the high school where Jordan played, told the Dallas Morning News, “his smile was infectious and his spirit shined bright on everyone that knew him.”