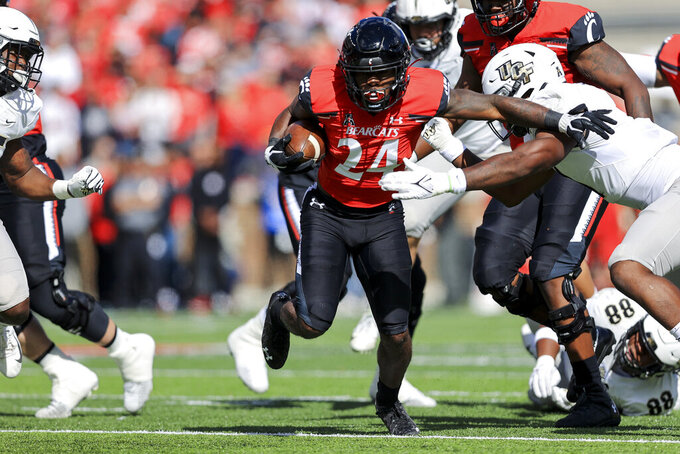 FILE - Cincinnati running back Jerome Ford (24) carries the ball as he breaks a tackle against UCF linebacker Jeremiah Jean-Baptiste, right, during the first half of an NCAA college football game, Saturday, Oct. 16, 2021, in Cincinnati. For Cincinnati (13-0), a member of the second-tier American Athletic Conference, the planets aligned. The Bearcats landed as the No. 4 seed in the CFP, invading the domain of college football's blue bloods. (AP Photo/Aaron Doster, File) 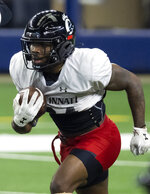 The running back never really thought about facing his former team or being part of the College Football Playoff, though he will do both when the undefeated American Athletic Conference champion Bearcats play defending national champ Alabama in a CFP semifinal at the Cotton Bowl on Friday.

“It didn’t really cross my mind,” Ford said about Cincinnati becoming the first non-Power Five team to reach the four-team playoff. “The only thing I thought about … is how could I contribute to help win games and win a conference championship. Anything else would have been a plus.”

“I’m a Bearcat and I would kind of appreciate it if people stopped calling me the Alabama transfer,” Ford said.

Ford quickly moved on to Cincinnati after going into the transfer portal. Even though the four-star recruit initially chose the SEC powerhouse out of high school, Ford still had a relationship with UC assistant coach Gino Guidugli, the former Bearcats quarterback who recruited him in the Tampa area.

“He’s a great player, very explosive,” said Crimson Tide safety Jordan Battle, who had a locker near Ford in Tuscaloosa. “We know we have to come and wrap up because he has great balance, he’s running the ball well. He’s a great player, and it’s going to be a great task for us.”

Facing his former teammates will be quite a challenge as well for Ford. The Crimson Tide (12-1) have allowed only 82.8 yards rushing per game and eight rushing TDs all season.

Ford had 187 yards rushing in the AAC championship game that included TD runs of 79 and 42 yards. The longest run against the Crimson Tide this season is 37 yards.

“We thought Jerome was an outstanding player when he was with us. He had some success with us, and I think he’s done a really, really good job of continuing to develop as a player,” Alabama coach Nick Saban said. “I’m really happy that, you know, things have worked out well for him where he can create value for himself in terms of the goals and aspirations that he had.”

The only start for Ford with the Tide came in the 2019 season opener when Najee Harris and Brian Robinson, now their leading rusher, were both benched in the first quarter. Ford had 10 carries for 64 yards with a 37-yard TD that day against Duke, and finished with 31 carries for 151 yards and three TDs overall at Bama.

“He’s one of those guys who works his butt off. Fast guy, physical guy, knows how to finish plays well,” said Robinson, who has 1,071 yards rushing and 14 TDs this season. “So it’s exciting to be able to play against Jerome on the other side of the ball on one of these biggest stages. I’m excited to see how he handles that. … I can’t wait to see how it turns out.”

Ford this week expressed his appreciation for all that Saban has done for him and the opportunity he had to play for the Crimson Tide.

Now he is playing against them, something that he intentionally tried to keep out of his mind throughout the season when the Bearcats kept winning games on the way to their unprecedented playoff berth.

“All the playoff talk all year, we just tried to stay close to our brothers in the locker room,” Ford said. “Be where our feet are and be us. … Now we’re here.”

Cincinnati quarterback Desmond Ridder said it is easy to see Alabama’s physicality on film, but that Ford is able provide some insight on the Crimson Tide culture and how they approach and prepare for games.

“So we’re not just hit in the face when we get out there and something maybe a little different than what we think,” Ridder said.

Ford insists there is no extra motivation playing Alabama. He was happy to watch his former teammates win the national title last season. Cincinnati offensive coordinator Mike Denbrock agreed that Ford has been “fully motivated all year” and been on top of his game.

“He’s a hard-yard guy, which means he could get in between the tackles and do the dirty work that running backs need to do sometimes, whether that’s falling forward gaining an extra yard, gaining an extra two yards,” Denbrock said. “He also has the ability to kind of break out in space and make explosive runs and score touchdowns. .. He’s a complete back.”