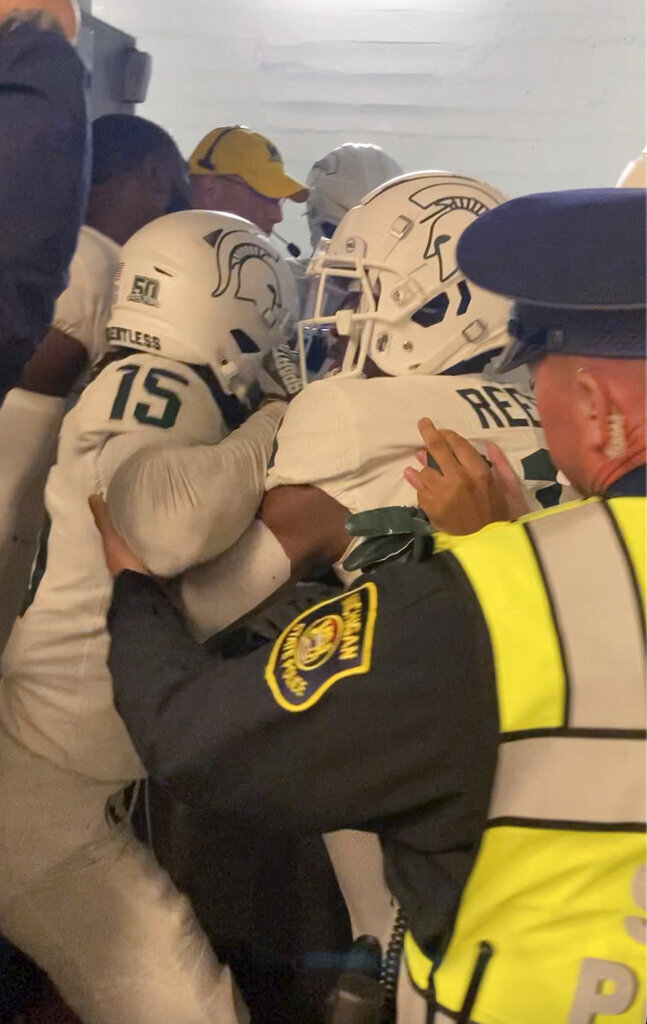 ANN ARBOR, Mich. (AP) — The Big Ten has disciplined Michigan State and Michigan for their roles in stadium tunnel altercations that led to seven Spartans being charged with crimes.

The conference announced Monday that it is fining Michigan State $100,000 for its football players “hitting, kicking or using of their helmet” to hit Michigan players and suspending cornerback Khary Crump, who is facing a felony charge, for the first eight games of next season.

The Big Ten is also reprimanding Michigan for failing to “provide adequate protection for personnel of both home and visiting teams when entering and leaving playing arenas," per conference policy.

“The Big Ten Conference has a standard of excellence both academically and athletically that has been built over 127 years,” said Big Ten Commissioner Kevin Warren, who attended the game a month ago and has a son, Powers Warren, who is a walk-on tight end for the Spartans. “Our standards require that our student-athletes, coaches and staff members represent the conference, and their member institutions, with the highest level of decorum and sportsmanship.

“We are taking disciplinary action and will continue to work with our member institutions to strengthen their game day procedures and ensure our honored traditions.”

The Big Ten said the suspensions that ended the season for seven other Michigan State players were sufficient. The conference also said the schools properly addressed a football staff member who violated the Big Ten's sportsmanship policy in an incident unrelated to the tunnel altercations.

The most serious charge is against Crump, who faces one count of felonious assault, and the other six players are charged with misdemeanors. Crump in one video appears to swing his helmet at a Michigan player. That could account for the more serious charge, which carries a maximum sentence of four years in prison. State law describes felonious assault as an attack “using knife, iron bar, club, brass knuckles or other dangerous weapon without intending to commit murder or to inflict great bodily harm.”

“We accept the findings from the Big Ten conference and we are ready to move forward as a football program,” the joint statement read. “We are committed to supporting our student-athletes and will continue to do so throughout this process.”

A conviction for a misdemeanor count of assault carries a prison term of up to one year, while misdemeanor assault and battery carries a maximum sentence of 93 days behind bars.

“Our institution does not excuse the concerning actions by some of our student-athletes," Michigan State Interim President Teresa K. Woodruff said in a statement. “At the same time, we challenge ourselves collectively to be thoughtful in how we approach this situation so that further harm isn’t needlessly done.

“What seems to be missing from the disciplinary outcomes are the learning opportunities that can and should coexist with findings of fault. We must ask ourselves: Are we doing enough, as leaders, to help further safety within our competitions through meaningful actions and education? Or are we risking the opportunities and livelihoods of young people without creating change for success in the future?”

Spartans cornerback Malcolm Jones, one of the suspended players, is not facing charges, nor are any players from Michigan.

Following the Wolverines' 29-7 win over their in-state rivals, social media posts showed Michigan State players roughing up Michigan’s Ja’Den McBurrows in and near a hallway that doesn’t lead to either locker room. Brown, Grose and Young are clearly seen on video getting physical with McBurrows.

McBurrows skipped into the tunnel after the game and defensive back Gemon Green walked up it alongside Spartans while much of Michigan’s team was waving the Spartans off the field.

Green, in another post, is seen surrounded by police while shouting across the tunnel at Michigan State players.

The prosecutor’s office did not provide detail on the allegations, including who is accused of hitting whom. It was not clear when the charged players will make initial appearances in court.

No. 2 Michigan secured the Big Ten East Division title by beating rival Ohio State, and is preparing to face unranked Purdue in the conference championship game. A win would give the Wolverines a spot in the College Football Playoff.

Michigan State won five games under Tucker, who helped them go 11-2 last season with a second straight win over the Wolverines.

Michigan athletic director Warde Manuel said the Big Ten's reprimand was related to a fan touching Tucker as he walked into the tunnel, actions he said were “wholly unacceptable."

“The offender was quickly identified and swiftly ejected,” Manuel said.

The conference did not immediately respond to confirm whether Michigan's reprimand was unrelated to the altercations in the tunnel involving players.