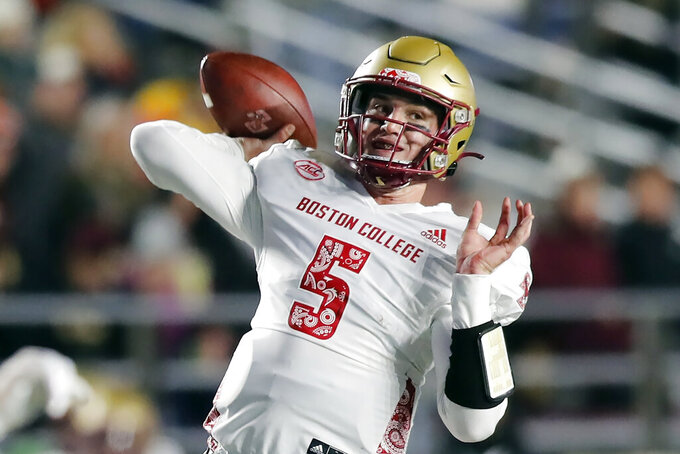 BOSTON (AP) — Boston College defensive back Jason Maitre wears a pendant of a lion around his neck, and he tries to adopt the attitude of one whenever he takes the field.

“Everybody in a jungle has got to be ready to attack,” the fifth-year senior explained after the Eagles opened training camp this month. “The jungle is never a safe place. You’ve got to attack or you’re going to get eaten. You’ve got to hunt.

After languishing in the middle of the Atlantic Coast Conference for most of the last decade — and stumbling to last in the division in 2021 — Boston College is hoping to strike a bit more fear in opponents this season. The keys to making a jump: A healthy Phil Jurkovec throwing to NFL prospect Zay Flowers, a more aggressive defense, and an edgier attitude in coach Jeff Hafley’s third year.

“It’s a little more intensity from the coaches and players, and you can feel it,” Maitre said. “I think we underachieved (last year). We can do big things. We have a good team.”

BC fired Steve Addazio in 2019 after seven years in which it never topped seven wins or a .500 conference record. Hafley’s connection to Ohio State, which was on its way to the playoffs at the time, gave the Eagles hope that they could aspire to more.

But two six-win seasons later, BC is still trapped in the middle. Last year’s team (6-6, 2-6 ACC) finished tied for last in the Atlantic Division.

Hafley said after opening training camp this month that he doesn’t feel more urgency to win now than he ever did. “Do I have a little bit more of an edge to me because I'm still a little bit (angry) how it went (last year)? Yeah, I am,” he said.

“But the urgency is the same. Exactly the same,” he said. "So maybe you’re just seeing a different edge out of me and maybe you’re seeing me just being more comfortable being a head coach and being who I am.”

Landing Jurkovec as a transfer from Notre Dame in Hafley's first year was supposed to be a game-changer for BC, which hadn't had an NFL prospect at quarterback since Matt Ryan left the Heights in 2008.

But the former four-star recruit hasn't been able to stay healthy. Last year, it was a broken bone in his throwing hand; although he was expected to miss the rest of the season, he returned on Nov. 5 — reportedly with 50% grip strength.

Jurkovec wound up playing six games, completing 52 of 96 passes for 914 yards and seven touchdowns. He also ran 50 times for 322 yards and five scores.

All of his goals for this season depend on staying healthy.

“The big focus though this year is making sure that I don’t take as many hits,” he said.

Flowers had a chance to go pro, and he also considered transferring to a school with a higher-profile program that would allow him to cash in on name, image and likeness money.

Instead, he's back for a chance to get his degree and to help BC win the division for the first time since Ryan led them to back-to-back appearances in the ACC title game.

Flowers led the ACC in 2020 with nine touchdown catches, grabbing 56 passes for 892 yards. As a junior, he caught 44 passes for 746 yards and five touchdowns.

Receiver Jaelen Gill missed the start of last season because of a stress fracture in his foot and finished with 24 catches for 269 yards. Jaden Williams (19, 212) will also be a target for Jurkovec, along with tight end George Takacs, who transferred from Notre Dame.

Running back Pat Garwo III returns after topping 1,000 yards last season. But his blockers are all new: Four went to the NFL, and returning guard Christian Mahogany tore his ACL during spring practice.

Offensive coordinator John McNulty replaces Frank Cignetti Jr., who was hired by Pittsburgh. McNulty had worked for six NFL teams and as the OC at Rutgers but was most recently the tight ends coach at Notre Dame.