Chasing Buckeyes: Who can dethrone Ohio State in Big Ten? 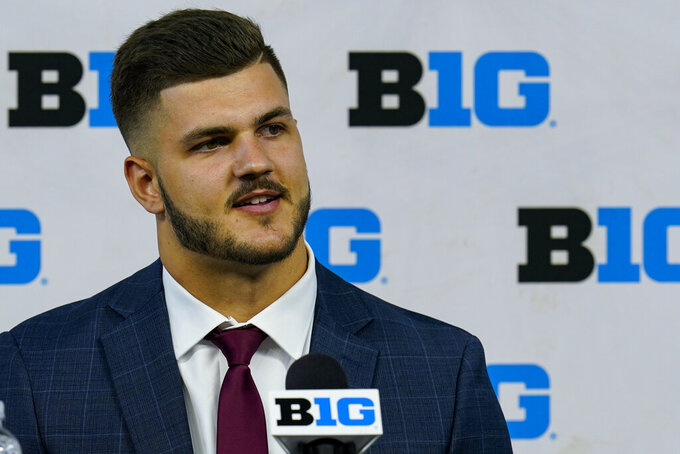 INDIANAPOLIS (AP) — There aren't many revelations to be learned about Ohio State’s recent dominance in the Big Ten.

But say the school’s name to Indiana senior wide receiver Ty Fryfogle and he smiles with anticipation.

Compiling a short list of schools capable of ending the Buckeyes’ reign as four-time champions starts with the Hoosiers. Thanks in part to Fryfogle’s seven catches for 218 yards and three touchdowns, Indiana rallied from a 28-point deficit to push the Buckeyes in a 42-35 loss at Ohio State last season.

That was the only loss last season for Hoosiers junior quarterback Michael Penix Jr., who completed 27 of 51 passes for a career-high 491 yards and five TDs.

“It showed a lot of people that you can’t count us out,” Penix said.

The 2021 Buckeyes are different and, at least on paper, could be vulnerable. Quarterback Justin Fields is gone, drafted 11th overall by the Chicago Bears. Three young passers are in the mix to lead an offense that has weapons but some questions on the offensive line. The defense needs new linebackers and must bolster a shaky secondary.

“There’s inexperience in some areas,” Ohio State coach Ryan Day said, referring to a roster with 45 players in their first or second years.

That said, Day is 23-2 including 15-0 in the Big Ten since taking over for Urban Meyer. The losses were to Clemson and Alabama in the College Football Playoff.

“They are the gold standard and that is who we are chasing,” Indiana coach Tom Allen said. "We’re trying to chase that greatness every single day.”

Allen, the 2020 Big Ten coach of the year, referred to his inspiring message to the Hoosiers after that loss at Ohio State as one of the season's best moments. He hopes that becomes a springboard to more memorable accomplishments.

Indiana’s defense is led by senior linebacker Micah McFadden, one of the conference’s best tacklers, and like Fryfogle is a third-team All-American.

“This is the most depth we’ve had on our team since I’ve been at Indiana,” Allen said.

Who else is on that short list? Minnesota hosts the Buckeyes on Sept. 2 in a Thursday night season opener. The Gophers have an experienced offensive line and run game as well as quarterback Tanner Morgan, who led the Big Ten in passing yards in 2019 but faltered in 2020.

Penn State’s Sean Clifford finished last season with seven TD passes in four wins and has 41 in his career. Wisconsin’s Graham Mertz threw seven TD passes in his first two games and the Badgers are a trendy pick ahead of Iowa to win the Big Ten West.

Iowa’s Kirk Ferentz, at 65, is the dean of Big Ten coaches and entering his 23rd season. He is 2-8 against the Buckeyes.

“I’ve got a lot of stories about Ohio State,” Ferentz said. “None of them are very good.”

He recalled being a spectator for one of Ohio State’s victories at Lucas Oil Stadium, annual site of December’s Big Ten championship game.

“They were beating somebody on this field pretty convincingly, whatever year it might have been. It was lopsided at halftime. I got bored,” Ferentz said. “I went on my iPad, looked it up, and what I learned was if you had scheduled Ohio State up until 1900, no problem. Since 1900, they’ve been pretty good.

“It’s hardly a new story. It’s generational. I’ve been in this league quite a while. Year in and year out, including my six years in the NFL looking at draft boards, nobody has had more higher draft picks than Ohio State.”

Players change in the Big Ten, but one constant remains: Ohio State is the program by which all others are measured.

“Them, Clemson and Alabama, there’s a reason why they’re the first three that everybody thinks of,” Ferentz said.

The Buckeyes are aware from day one that teams like the Hoosiers can’t wait for that next chance.

“It’s something that we embrace,” Ohio State junior defensive end Zach Harrison said. “We know that every time we step on the field, we’re going to get every team’s best. They’re going to go 100% that week. They’ve circled us on their calendar the whole year.”

Fryfogle conceded he didn’t need to be reminded of the date of this year’s game against Ohio State — the Buckeyes visit Bloomington on Oct. 23.