Despite ugly loss, Georgia has another clear path to playoff 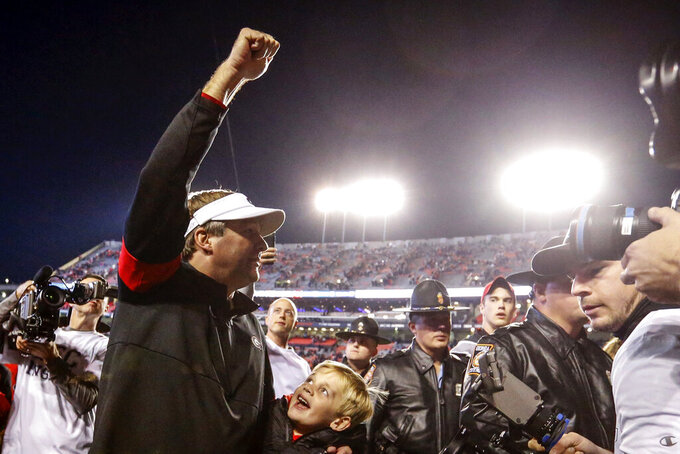 Georgia head coach Kirby Smart celebrates as he walks off the field after the team defeated Auburn 21-14 in an NCAA college football game, Saturday, Nov. 16, 2019, in Auburn, Ala. (AP Photo/Butch Dill) 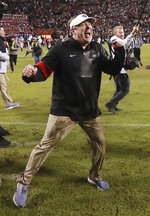 His players all have one, too.

They can keep up with the chatter like everyone else.

“These kids live and die by these things, man,” Georgia’s coach said Monday, shrugging his shoulders.

Yep, his players are fully aware.

Despite the ugliest loss of any national championship contender, the No. 4 Bulldogs head into late November with a clear path to the College Football Playoff.

“You don't control that,” Smart said. “They're going to see it. They're going to hear it. What you try to emphasize is the facts. Here are the facts: if we block and tackle people, we're pretty good.”

A little over a month ago, Georgia didn’t look good at all.

The Bulldogs somehow lost at home to 24½-point underdog South Carolina, a team that is 4-7 and most recently took a 30-6 loss at Texas A&M — the team that Georgia, in an interesting twist, hosts Saturday in its final game of the season at Sanford Stadium.

That looked like it would completely derail any championship aspirations, but the Bulldogs (9-1, 6-1) have bounced back with impressive wins over No. 10 Florida and No. 16 Auburn, clinching the SEC East title for the third year in a row.

“I knew what we were capable of. I knew the South Carolina game was just a combination of us turning the ball over and not playing our best football,” tight end Eli Wolf said. “I know when we play the way we’re capable of, we can do just about anything.”

As it turned out, that unthinkable setback won’t be a hindrance to any of Georgia’s goals.

The Bulldogs still claimed the division title, the first team from the East to win three straight since the 1990s. They climbed back into the top four of the CFP rankings last week, the voters impressed enough with a schedule that also includes a victory over No. 15 Notre Dame to overlook the South Carolina defeat. They’ll surely stay there when the new rankings come out on Tuesday.

Essentially, Georgia is in the same position it’s been the last two years after 10 games. If the Bulldogs can win their last two regular-season games, they’ll play in the SEC title game — most likely against top-ranked LSU — for a spot in the four-team playoff.

In 2017, Georgia knocked off Auburn for the SEC title to earn its playoff berth, going on to beat Oklahoma in the Rose Bowl before squandering a 13-point lead to Alabama and losing the national title game in overtime.

Last season, the Bulldogs were again denied by the Crimson Tide, only it was in the SEC championship. Squandering a pair of 14-point leads, they lost 35-28 and had to settle for a spot in the Sugar Bowl rather than a berth in the playoff.

Smart was asked to compare this year’s team with his two previous squads.

“Every team is different,” he said. “I think this team is getting better. I think the biggest thing, this team is going to be defined what it does going forward, not what it's done in the past.”

Turns out, what happened in the past — especially that one grim loss — didn’t affect Georgia’s ultimate goal this season.

If the Bulldogs can beat No. 24 Texas A&M (7-3, 2-4) on Saturday they will be a huge favorite in the regular-season finale against a two-win Georgia Tech team, which was blown out last weekend by Virginia Tech 45-0.

Then, it’s on to face LSU, presuming the Tigers get through their final two regular-season games against woeful Arkansas and Texas A&M without any slip-ups.

That South Carolina game is still lingering just a bit, serving as a reminder of what can go wrong.

“You’ve got to remember after the South Carolina loss, what the outside world was saying,” Wolf recalled. “You do the same when things are going well.

“When people start talking about the playoffs and stuff like that, you block it out and say, ‘Remember who we are, remember where we were after South Carolina.’”