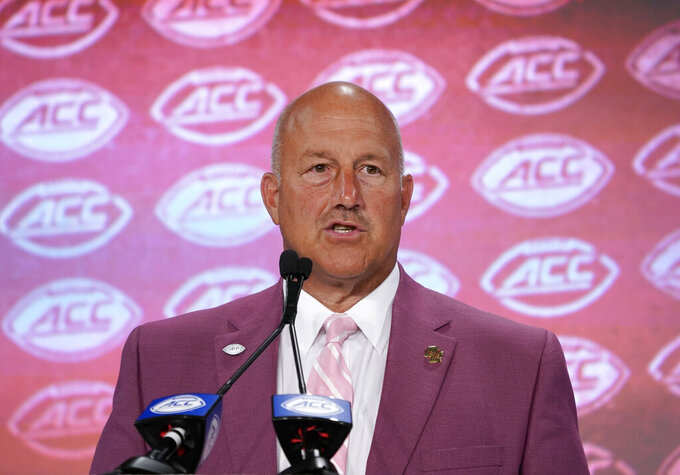 CHARLOTTE, N.C. (AP) — Boston College's AJ Dillon was so good last year that he ranked among the nation's best rushers despite hobbling through an injury that sidelined him during stretches of multiple games.

Travis Etienne was right with him near the top of the rankings, providing the ground-game balance in Clemson's unbeaten run to another national championship.

They're both back, top rushers in an Atlantic Coast Conference division featuring multiple running backs capable of slipping through the slimmest of openings, pushing through (or past) would-be tacklers on the way to the end zone. It adds up to some potentially big rushing totals this fall in the league's Atlantic Division, even in today's world of pass-friendly offenses.

"If you're just a one-trick pony, people will load up on that," Boston College coach Steve Addazio said Wednesday during the league's media days. "But when you have the ability to have a dynamic run game, I believe it starts there."

Clearly that is part of Dabo Swinney's four-time reigning league champion Tigers' playbook, especially with Etienne back after running for 1,658 yards and 24 touchdowns — good for 15th in the Bowl Subdivision ranks at 110.5 yards per game. Same goes for Addazio's Eagles, who saw Dillon rank 13th (110.8) despite the injury that sidelined him for two full games and parts of others.

Yet there's also Cade Carney, who as a junior became Wake Forest's first 1,000-yard rusher in 13 years last season while sharing work with the departed Matt Colburn II. There's Cam Akers at Florida State, a 1,000-yard rusher as a freshman hoping to bounce back from the Seminoles all-around rough 2018 season.

That particular quartet of experienced ball carriers have the potential to take the pressure off their quarterbacks and carry the load, particularly with Dillon's ability to tote it 25 or 30 times a game.

The 6-foot, 250-pound junior has been a dominant runner since arriving with a 1,589-yard rushing season as a freshman. And after being picked as the preseason ACC player of the year, he ran for 652 yards through the first five games last year before going down with a high left ankle sprain that hindered him through the rest of the schedule.

He ranked fifth in FBS at 130.4 yards per game at the time of the injury.

"I want to reach whatever potential I can, so I don't have a (goal) for however many yards or average yards per carry," Dillon said. "Because the thing is, if my team needs me to run down the clock in the fourth quarter and I'm getting a bunch of 1-yard gains, I'm fine with that and I'm happy with that. I don't really care what it might look like at the very end on the stat line."

As for the 5-10, 215-pound Etienne, he had six games with at least 150 yards rushing — including a high of 203 yards and three touchdowns in an overtime win against Syracuse — and ran for nine touchdowns in the Tigers' last five games.

"You play BC and if you allow AJ Dillon to run, you have no chance of winning the game," Wake Forest coach Dave Clawson said. "You play Clemson and Travis Etienne can go off, and you have no choice then of beating them. . If you have a legitimate running back and you don't slow them down, that's what you're going to get."