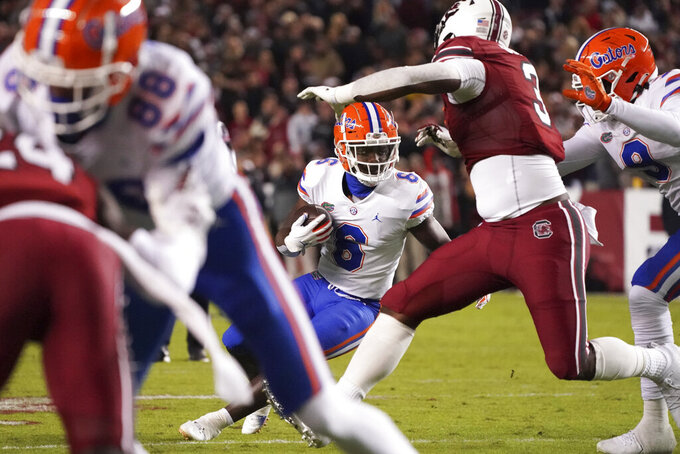 GAINESVILLE, Fla. (AP) — It doesn’t really matter what embattled Florida coach Dan Mullen says or does at this point. It’s more important to see how his team responds down the stretch in an otherwise lost season.

The Gators (4-5) have three regular-season games remaining, beginning Saturday against Samford (4-5), to show they haven’t given up on Mullen.

It looked that way last week at South Carolina. Florida allowed a season-high 459 yards and its most points in the series in a 40-17 stunner than sent shockwaves through the program.

Mullen responded by firing defensive coordinator Todd Grantham and offensive line coach/run game coordinator John Hevesy. He took accountability for the team losing eight of its last 10 games against Power Five opponents, expressed concern for the team’s direction and vowed to get the Gators back to being a championship contender.

No one expects an overnight turnaround. But Mullen probably can’t afford another shocking loss – or even a lackluster effort — in the Swamp against a middle-of-the-pack team from the Southern Conference.

“So regardless of if we’re 4-5 or 0-9, we still got to go out there and play hard because at the end of the day we represent Florida, we represent the last name you got on your back. So that’s what we have to three last three or four games. It shouldn’t even be a question of, ‘What are we playing for? Do you play hard?’ You’re playing for your own self, personal pride and the pride of Florida, the pride of your family.”

Florida, which has lost three straight games for the second time in 10 months, is expected to roll against a team from the Football Championship Subdivision. The more telling test comes next week at Missouri and the following week against rival Florida State.

If Mullen wins all three, he likely will return for a fifth season in Gainesville. Lose one or two and he could be out of work like close friends and longtime assistants Grantham and Hevesy.

“One of the biggest things Coach always tells us is don’t listen to the outside noise,” guard Stewart Reese said. “One thing that I’ve learned in six years of playing college football is they’re going to praise you when you’re up and they’re going to kick you in the (butt) when you’re down. …

"At the end of the day, it doesn’t matter what everybody else has to say. We got to do what we need to do for our coach to make sure we finish out the season the right way.”

Florida quarterback Anthony Richardson, who injured a knee dancing in the team hotel the night before last week's loss, is expected to be cleared to play. Richardson had been recovering from a concussion that sidelined him against top-ranked Georgia the previous week.

If Richardson sits again, former starter Emory Jones would get another chance.

The Bulldogs are 2-78-3 against current teams in the Southeastern Conference. Samford beat Mississippi State 6-0 in 1909 and knocked off Ole Miss 7-6 in 1934.

“We have to be in attack mode at the beginning of the game and hope we’re very efficient in all of our calls," coach Chris Hatcher said. “We’re going to go down there, play hard, keep the game plan simple and let our guys go out there and play and see what happens.”

Linebackers coach Christian Robinson will call Florida's defense. Longtime Syracuse coach Paul Pasqualoni, who, at 72, had been Mullen’s special assistant, will take an on-the-field role. And Michael Sollenne will work with the offensive line for the rest of the year.

Florida is 4-0 against FCS teams under Mullen, winning by a combined score of 199-16. Four years before Mullen arrived, the Gators famously lost to Georgia Southern in a game most consider the beginning of the end in then-coach Will Muschamp’s tenure.