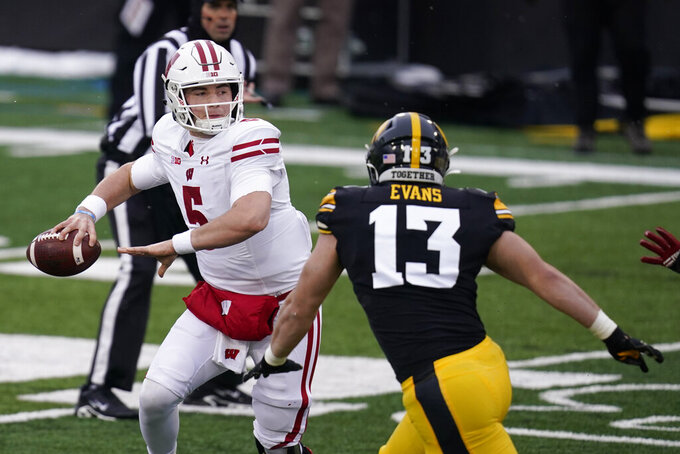 Their annual battle for Paul Bunyan’s Axe just happens to be taking place a little later than expected.

When a COVID-19 outbreak within Minnesota’s program caused the cancellation of its Nov. 28 game at Wisconsin, it appeared this would be the first season since 1906 without a matchup between the two Big Ten border rivals.

But the Big Ten announced this week that Minnesota (3-3) and Wisconsin (2-3) would face off Saturday as part of the league’s championship weekend events.

“This is the rivalry that you dream of, especially me being from Minnesota and being a Minnesota home-grown kid,” Minnesota defensive end Boye Mafe said. “This rivalry means everything to us, so to have it taken away from us hurts. When it happened and the game was canceled, we were all hurt as a team. We all wanted to be playing in that game. But now the fact that it’s back, it’s time.’’

Neither of these teams has lived up to expectations.

Minnesota is trying to avoid finishing below .500 after going 11-2 and winning the Outback Bowl last season. Wisconsin was ranked in the top 10 earlier this year but has dropped three straight games and now is seeking to avoid its first losing season since 2001.

Winning this rivalry game gives each team a chance to salvage something from a disappointing season.

“To get that game canceled, it crushed us,” Wisconsin linebacker Jack Sanborn said. “A lot of us were really upset because that’s the big one: Wisconsin versus Minnesota. That’s the game every year you go into, that’s the goal, to go win that game and keep the Axe here in Madison. Definitely guys are pumped to play that game this year.”

Minnesota can tie this series at 61-61-8 by winning Saturday. Wisconsin regained the lead by winning 38-17 at Minnesota last year. The Gophers had won 37-15 at Madison in 2018 to snap Wisconsin’s 14-game winning streak in the rivalry.

This game features an intriguing matchup between Minnesota running back Mohamed Ibrahim and Wisconsin’s front seven on defense.

Ibrahim has rushed for 925 yards and ranks third among all Football Bowl Subdivision players with 154.17 yards rushing per game. He has 15 touchdown runs to tie for fifth nationally.

Wisconsin allows the third-fewest yards rushing per game (83.2) of any FBS team. The Badgers have given up the fewest total yards per game (251) of anyone.

Ibrahim made a point to praise his blockers for his winning the Big Ten Running Back of the Year award. The offensive line received its share of official recognition, too, with Minnesota ranking fourth in the conference in both points and yards per game.

“That just speaks loud to how people think about us, our o-line and how they play, and the job that we get done as a whole offensive unit,” Ibrahim said.

Wisconsin has scored seven points or fewer in each of its last three games. This is the first time since 1990 that the Badgers have scored in single digits in three straight games. Wisconsin has a chance to end that slump Saturday against a Minnesota team that is allowing 31.8 points per game.

Wisconsin’s troubles stem in part from not having its top playmakers available.

Leading rusher Jalen Berger didn’t play in a 28-7 loss at No. 18 Iowa (No. 16 College Football Playoff ) last week and isn’t listed on the depth chart for Saturday’s game, an indication he likely won’t play. Wisconsin also has been missing two of its top receivers, as Danny Davis has missed three straight games and Kendric Pryor has sat out two of the last three games.

Wisconsin coach Paul Chryst said Thursday that Davis and Pryor “haven’t been ruled out, but they haven’t done a ton” this week.