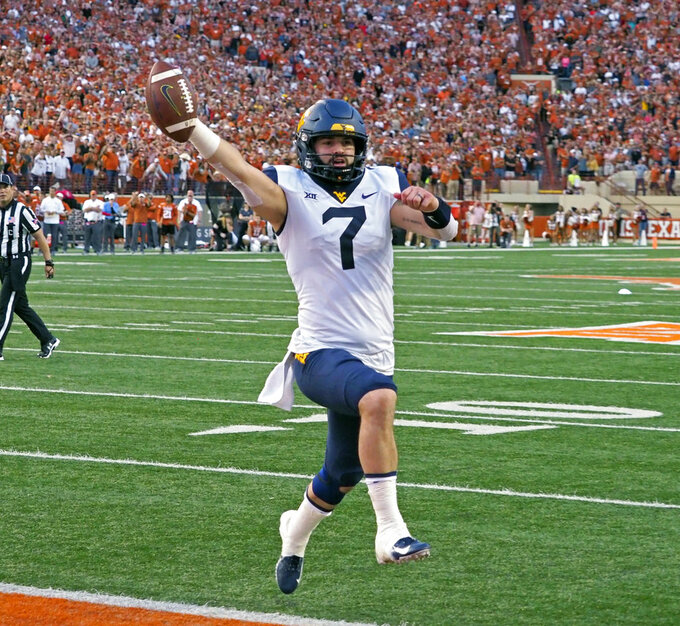 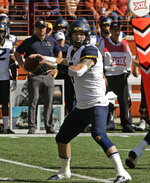 AUSTIN, Texas (AP) — The last time West Virginia quarterback Will Grier ran for the corner of the end zone against Texas, a dive resulted in a gnarly broken finger that ended his season.

He stayed upright this time, untouched as he scrambled for a 2-point conversion that gave No. 12 West Virginia a 42-41 win at No. 15 Texas on Saturday that kept the Mountaineers in first in the Big 12 as they try for their first conference championship.

Grier's scramble for the pylon came after he threaded a 33-yard touchdown pass to Gary Jennings with 16 seconds left, a perfect throw that Jennings caught in stride in the back of the end zone behind two defenders.

Instead of going for the tie, Mountaineers coach Dana Holgorsen dialed up a game-winner. Holgorsen and Grier said the decision was made even before the final drive started.

"It was an easy decision," Holgorsen said. "If you put the fate of the game in (Grier's) hands, I feel pretty good about it.... We've had this 2-point conversion in our back pocket all year."

It still took two snaps to win it.

On the first, Grier connected with Davis Sills on a quick slant. West Virginia (7-1, 5-1, No. 13 CFP) celebrated but officials ruled the play dead because Texas had called timeout just before the snap. So Grier had to do it again.

Sills was covered the second time. Grier took a step up in the pocket, and then saw a clearing to his left because the Texas safety had dropped off into double coverage on Sills. He held the ball up as he crossed the goal line before slamming it into the stadium wall.

"I had four different options on that play," Grier said. "I went with the fourth one, which was me running ... I stayed on my feet, which was good. Whatever it takes to win."

"I turned my back. All of a sudden, I heard the crowd get silent," Long said. "That told me everything I needed to know."

"I thought taunting before you cross the goal line negated a score," Herman said. "I've got to brush up on my rules and get some questions answered."

Sills caught touchdown passes of 60 and 18 yards for the Mountaineers.

"The silver lining is we play in the Big 12. We're not out of any race at this point," Herman said. "We certainly don't control our own destiny.

West Virginia: The Mountaineers got a huge effort in the running game to complement Grier, and the defense held on just enough to force the Longhorns to kick two field goals that kept them in range for Grier's late-game magic. The Mountaineers ran through the Texas defense for 232 yards. Martell Pettaway rushed for 121 yards on nine carries and scored on runs of 55 and 13 yards.

Texas: Injuries have become a problem while Texas has stumbled into the second half of its season. Starting safety Brandon Jones didn't play because he aggravated an ankle injury before the game at the team hotel, starting cornerback Davante Davis was knocked out on the first series with a shoulder and neck sprain and edge rusher Breckyn Hager dislocated his left shoulder in the first half.

West Virginia was penalized 14 times, eight in the first quarter alone. None were bigger than a pair of calls after Sills scored on a 60-yard touchdown pass.

Sills was flagged for unsportsmanlike conduct for flashing a "horns down" hand sign after the score. Then starting left tackle Yodny Cajuste was ejected after another unsportsmanlike call for throwing a punch on the extra point. The Mountaineers kicked off from their own 3 and Texas used three plays to drive the short field for a touchdown.

Big 12 Assistant Commissioner Bob Burda said the penalty for the "horns down" hand signal is "solely at the official's discretion" and he is unaware of whether teams have been warned not to do it when playing Texas.

"Here is what I'm disappointed about: We communicated with the refs if that thing was going to get called. I guess there was miscommunication," Holgorsen said, declining to say what game officials had told him before kickoff.

Texas couldn't get to Grier and gave up 578 total yards. The Mountaineers didn't allow a sack despite losing Cajuste. Backup left tackle Kelby Wickline had a huge game against Texas sack leader defensive end Charles Omenihu, who had two tackles and no quarterback hurries.

"Lose your all-American tackle, it doesn't bode well for what could happen," Holgorsen said. "We schemed some things up front, blocked hard. That's why we moved the ball."

West Virginia should get a boost for a big road win against a much improved Texas team compared to last season. The Longhorns likely drift back toward the bottom of the Top 25 after another game where the defense struggled again.