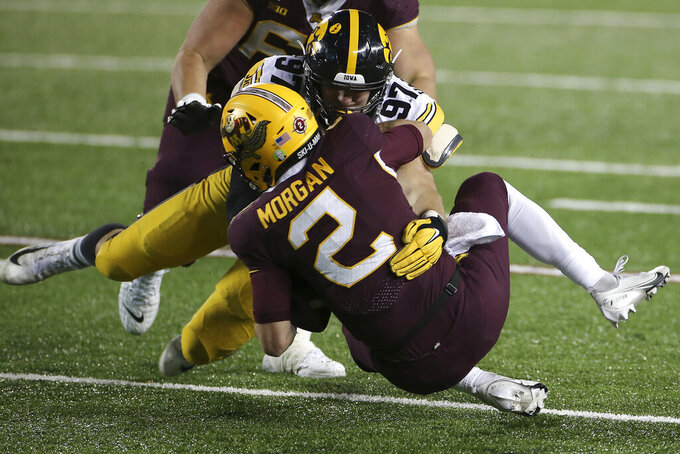 Iowa had to replace three starters on its defensive line, making it an area of concern heading into the season.

There are no worries now, not with Daviyon Nixon and Zach VanValkenburg playing at an All-Big Ten level and returning starter Chauncey Golston and graduate transfer Jack Heflin also having strong years.

The Hawkeyes have 11 sacks through four games, one behind Indiana's Big Ten-leading total of 12.

“The entire group outside of Chauncey was fairly inexperienced,” Iowa coach Kirk Ferentz said. “They have made progress, especially the last two weeks.”

VanValkenburg recorded three sacks in last week's 35-7 win at Minnesota, the most by an Iowa player since Anthony Nelson had three against the Gophers in 2018. VanValkenburg's 3 1/2 sacks for the season are tied for first in the conference.

Nixon also had a sack against Minnesota, raising his total to three. He has been in on at least one tackle for loss in all four games.

The Hawkeyes average 2.75 sacks per game, up from 2.54 last season when NFL second-round draft pick A.J. Epenesa was wrapping up his career.

Golston has picked up where he left off last season with two sacks and four tackles for a loss so far.

“One of our mantras in the program is if our best players are not improving, we’re probably going to be in trouble,” Ferentz said. “Chauncey is a great illustration of the kind of guys that we typically work with.”

VanValkenburg, Nixon and Heflin all transferred to Iowa, which visits Penn State on Saturday.

VanValkenburg came from Division II Hillsdale College in Michigan. He was named his conference's defensive lineman of the year in 2018 in his final season at Hillsdale. His breakout performance against Minnesota earned him Big Ten defensive player of the week honors.

"He really takes a mature approach and works extremely hard,” Ferentz said. “Has a great attitude and work ethic and those things I think are what really surfaced (against Minnesota). He’s really been playing better each opportunity.”

Nixon dominated at Iowa Western Community College in 2017, so much so that Alabama even offered a scholarship. But Nixon committed to Iowa, redshirted in 2018 and started once and appeared in 13 games in 2019.

Nixon has a team-high seven tackles for a loss, including his three sacks, and has forced a fumble.

“(Nixon) clearly has worked his way into a starting role where he’s impacting our defense in a positive way,” Ferentz said. “It’s the same thing off the field, which is good to see. If we’re going to be a good team, we need those kinds of stories on both sides of the ball and special teams as well. It’s how teams come together.”

Heflin played at Northern Illinois before joining the Hawkeyes. He was one of the top defensive linemen in the Mid-American Conference last year with three sacks and 8 1/2 tackles for loss. Through four games with Iowa he has 16 tackles, 1 1/2 for loss.

The work up front has been a big help to the secondary. Iowa has eight interceptions and a streak of 11 games with at least one pick.