Kentucky seeks to limit turnovers against No. 10 Gators 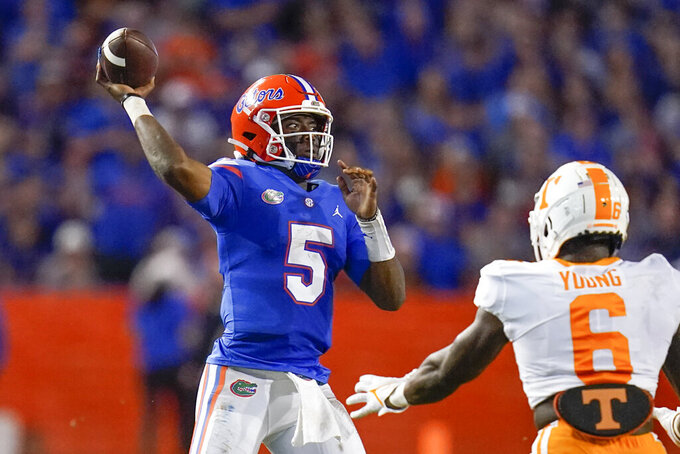 LEXINGTON, Ky. (AP) — Kentucky's prospects of winning its biggest game in several years likely depends on its ability to protect the ball better than it has all season.

The Wildcats (4-0, 2-0 Southeastern Conference) are tied for last in FBS with 11 turnovers and next to last in margin at minus-9. Fortunately for them, those giveaways haven’t hurt much because of a stingy, resilient defense that has made clutch plays to preserve close SEC wins over South Carolina and Missouri.

Those wins have put them in early SEC East contention entering Saturday night's showdown against No. 10 Florida (3-1, 1-1). Staying there means not giving the Gators easy opportunities.

“There’s no excuse when we have to clean up the turnovers, the fumbles in particular,” Kentucky coach Mark Stoops said this week. “I believe it’s something that we can get corrected, and we will.”

The Wildcats are off to their best start since beginning 5-0 in 2018, a breakthrough season boosted by their road upset of the Gators that snapped a 31-game series losing streak. Expectations are just as high this season and meeting them starts with Kentucky earning its first home win over Florida since 1986.

To pull off another upset, Kentucky will need a sustained offensive effort and that's been a struggle in recent weeks. Three turnovers each time haven’t helped, though Kentucky’s defense has limited the damage in instances such as last week’s 16-10 win at South Carolina. They held the Gamecocks to just a late field goal after stopping them on downs on consecutive fourth-quarter possessions.

“You view the situation as a detriment or as a challenge, an opportunity to do something really special," defensive coordinator Brad White said of the response. "We’ve got some great senior leaders, and that entire unit believes they can rise up in big moments.”

Florida looks to follow last week’s 38-14 win over rival Tennessee by beating Kentucky for the 34th time in 35 meetings.

The Gators come in with the nation’s ninth-ranked FBS offense (540.8 yards per game) that has succeeded by rushing the ball more than last season. They’ve built the SEC’s top ground game at 322.5 yards (third in FBS) and ran for 283 against a Volunteers defense that was allowing just 54.3 per outing.

Florida faces another challenge from a Kentucky defense allowing just 260 yards per game (ninth in FBS) and only 87.3 on the ground. While the Wildcats have work to do closing that turnover gap, they’re unbeaten because of their ability to make slim leads stand.

“They’re a big, physical defense and that’s what they play but they have a lot of experience,” Gators coach Dan Mullen said. “They understand the scheme inside and out. They’re very sound in what they do and when you have your guys that are confident in what they’re doing and they know the scheme and defense, they’re there and able to make plays.”

Florida backup QB Anthony Richardson, who missed the last two games while recovering from a strained right hamstring, is “100%, ready to go,” coach Dan Mullen said Wednesday. The redshirt freshman was the Gators’ best player the first two weeks of the season, coming off the bench to account for 467 yards and four touchdowns. He has 275 yards rushing and two scores, plus 192 yards passing and two TDs. Mullen has made clear that starter Emory Jones has a better grasp of the playbook, but he also knows Richardson’s rare talents make the Gators better.

“As the season goes, one of the things you want is to try to be as healthy as you can,” Mullen said. “(The) healthier you are, the better you are. Not just him but every position. So, we’re excited to have him back and to have him ready to go play because he’s a dynamic player.”

Kentucky receiver and native Wan’Dale Robinson has quickly become a key target with team highs of 25 receptions for 402 yards and two touchdowns. The Nebraska transfer has at least 400 yards for the third consecutive season and is just 59 yards from topping last fall’s career best set in eight games with the Cornhuskers.

Florida ranks eighth nationally with 14 sacks, including three last week against the Vols. Defensive end Zachary Carter had one and leads the Gators with 4.5, which is tied for the SEC lead.

HAND IT TO C-ROD

Though Kentucky running back Chris Rodriguez Jr. has struggled with fumbles this season including two last week, he continues to lead SEC rushers with 522 yards. Stoops is confident the junior will correct his mistakes, and 77 fourth-quarter rushing yards against South Carolina demonstrate his offensive effectiveness.

Kentucky has been consistent on third down this season, converting 54.3% of its chances to rank ninth nationally. They were 6 of 12 against the Gamecocks and have converted 14 of 26 opportunities in SEC play.