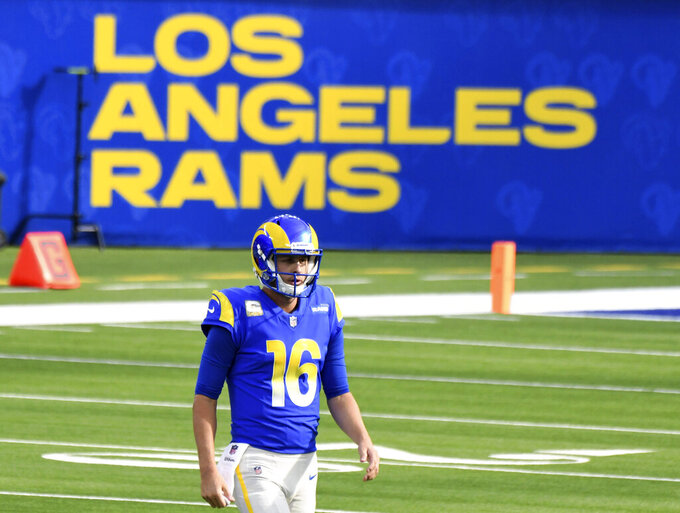 Quarterback Jared Goff #16 of the Los Angeles Rams against the Seattle Seahawks in the first half of a NFL football game at SoFi Stadium in Inglewood on Sunday, November 15, 2020. (Keith Birmingham/The Orange County Register via AP)

The Los Angeles Rams will hold their team meetings from home Wednesday after an unidentified player tested positive for coronavirus Tuesday night.

The player is self-quarantining, and the Rams say they are “entering intensive protocol.” The Rams were scheduled only for a light walkthrough practice Wednesday with an extra-long week of preparation for their game at Tampa Bay on Monday night.

Rams players and coaches will hold their normal meeting schedule from home. They haven’t determined their schedule for the rest of the week.

Los Angeles center Brian Allen was the first NFL player to confirm he had tested positive for coronavirus back in April. Other Rams players who have already recovered from COVID-19 infections include left tackle Andrew Whitworth and linebacker Terrell Lewis.

The Rams (6-3) beat the Seattle Seahawks 23-16 last Sunday to move into a first-place tie atop the NFC West.

The Atlantic Coast Conference says this weekend’s game between Duke and Wake Forest won’t be played due to coronavirus issues and injuries within the Demon Deacons’ football program.

The league made the announcement Tuesday night ahead of Saturday's matchup at Duke. The ACC’s statement made no mention of rescheduling, though Wake Forest said in a separate release that it would work with Duke and the ACC on the possibility of rescheduling the game.

Wake Forest said the decision is due to “a combination of positive cases, quarantine of close contacts and injuries.” The Demon Deacons won’t hold team activities or practice Wednesday and Thursday.

Wake Forest is coming off a 59-53 loss at North Carolina last weekend.

The move comes a day after the ACC announced multiple rescheduled games that included moving Wake Forest’s game at Louisville up a week to Nov. 28 while pushing a visit from No. 12 Miami back a week to Dec. 5. And a September game against No. 2 Notre Dame had already been rescheduled to Dec. 12 due to coronavirus concerns within the Fighting Irish program.

Wake Forest coach Dave Clawson said late Tuesday afternoon that the team was “not unaffected” by coronavirus issues and that it was down an unspecified number of players.

“It’s a small number and we hope to keep it that way,” Clawson said.

Prices start at $50 with options ranging from four- to six-foot tall cutouts and an upgraded version autographed by men’s coach John Calipari. The Rupp premium option is a four-foot version to be placed in the first two rows of the arena. The six-foot tunnel option includes Calipari’s autograph and will be placed in the tunnels and corners where the team enters the floor.

Proceeds from the cutouts will benefit athlete scholarships and educational support.

The Texas A&M men’s basketball team won’t open the season at the Crossover Classic tournament in South Dakota because of concerns about the novel coronavirus.

The Aggies were scheduled to begin their season on Nov. 25 against No. 15 West Virginia in the tournament. Instead, they’ll play their season-opener at home on Nov. 29 against the University of New Orleans.

Texas A&M athletics director Ross Bjork said the decision was made after input from public health experts and the school’s medical team after seeing the rise in COVID-19 cases across the country, including in South Dakota.

Bjork said school officials felt it was "most prudent to stay in Texas and work to schedule a home game at Reed Arena.”

The Purple Aces will also play Prairie View A&M in the nine-team event over 10 days.

SIU pulled out following a pause in team activities because of positive COVID-19 tests.

The event will be 16 games instead of 17, and Louisville will play five games in the multi-team event, to be based at the KFC Yum! Center and adjacent Galt House Hotel.

The list is used for players who either test positive for the coronavirus or have had close contact with someone who tested positive.

If the players tested positive they would miss this week’s game against Kansas City. If they are only close contacts and don’t test positive they could return before Sunday.

Mississippi basketball coach Kermit Davis has tested positive for COVID-19 and could be sidelined when the season starts.

Ole Miss announced the positive test on Tuesday, saying if a follow-up test is also positive Davis will isolate at home and miss the Rebels’ first two games.

Ronnie Hamilton would serve as interim head coach for the home games Nov. 25 and Nov. 26 against Central Arkansas and Jackson State.

Davis would still be allowed to observe practice and communicate with the team virtually.

The Indiana Hoosiers will open basketball season this with empty stands.

School officials say they will remain empty indefinitely, though they plan to work with state and local health officials as well as Big Ten and campus leaders to determine when or if fans will be allowed into Assembly Hall. The Hoosiers pride themselves on having the nation’s largest basketball student section.

Ticket-holders can apply for refunds or find other options on the school’s varsity club website.

Tennessee Tech is having a hard time starting its women’s basketball season with first Vanderbilt and now Chattanooga forced to cancel games.

Vanderbilt announced Tuesday morning it had canceled its opener scheduled for Nov. 25 with Tennessee Tech due to positive COVID-19 tests, contact tracing and injuries. A few hours later, Chattanooga paused team activities for a two-week quarantine and canceled games at Tennessee State and at home against Tennessee Tech.

Tennessee Tech officials say they are working hard trying to replace those games on the schedule before the next scheduled game Dec. 3 in their Ohio Valley Conference opener at Jacksonville State.

The NFL says there were 17 new confirmed positive tests among players and another 35 positives among other personnel in the latest round of testing for the novel coronavirus.

Since the beginning of August through Nov. 14, the NFL and the Players Association report that approximately 645,000 tests have been administered and 95 players and 175 other personnel have tested positive.

Earlier Tuesday the team announced players would be working remotely after a player tested positive. The Giants learned of the result Monday night and Gano immediately self-isolated.

Two close contacts, both staff members, were identified and told to remain home. The team headquarters will be open to staff.

The Giants (3-7) have a bye this weekend. Players were to meet Tuesday and Wednesday and then have the rest of the week off. The team is working with the NFL’s chief medical officer on the problem.

Bill Haas has tested positive for the coronavirus and has withdrawn from the RSM Classic this week at Sea Island. Haas had received a sponsor exemption.

Haas is the 16th player to test positive since the PGA Tour returned from the COVID-19 pandemic in June. The RSM Classic is the 24th consecutive week of tour events, including the three majors.

Haas says he was disappointed to get the news and now wants to make sure he and his family are healthy. He must self-isolate for 10 days. The final PGA Tour event of the year is Dec. 3-6 at the Mayakoba Golf Classic in Mexico.

An unidentified New York Giants player has tested positive for the coronavirus, prompting the team to work remotely Tuesday.

The Giants said in a statement they learned of the result Monday night and are working with the NFL’s chief medical officer.

The player was immediately isolated and contact tracing began. Two close contacts, both staff members, were told to remain home. Team headquarters is open to staff.

The Giants (3-7) have a bye this weekend. Players were to meet Tuesday and Wednesday and be off the rest of the week.

The Ukraine soccer federation says its Nations League game against Switzerland has been canceled.

The federation says health officials in the Swiss canton state of Lucerne put the squad into quarantine.

Six Ukraine players have tested positive for COVID-19 in Switzerland. UEFA’s disciplinary panel could order Ukraine to forfeit the game.

The French soccer league says Saturday’s game between Marseille and Nice has been postponed because of a coronavirus outbreak in the Nice squad.

The league says at least 10 of the 30 listed players for Nice have tested positive for COVID-19 and will not be available.

No new date has been set for the match.

The Swiss soccer federation says it is waiting for UEFA to decide if its Nations League match will be played after several COVID-19 infections were found in the visiting Ukraine squad.

Ukraine has had six players test positive in Switzerland. But the Ukrainian federation says two of the six should have UEFA clearance to play because Sergei Kryvtsov and Junior Moraes have antibodies after previously testing positive.

Ukraine could be forced to forfeit the game. The match will decide which of the two teams is relegated to the second tier.