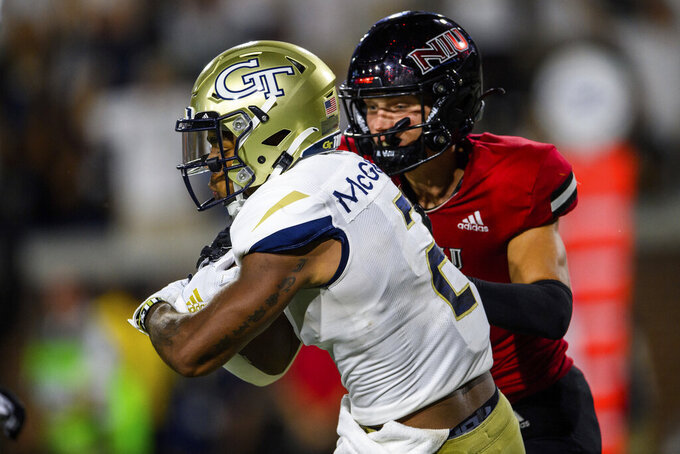 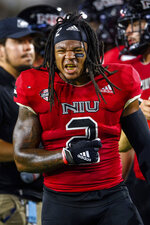 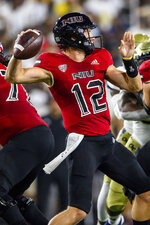 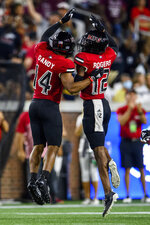 ATLANTA (AP) — Thomas Hammock had no interest in his underdog Northern Illinois team settling for an overtime against Georgia Tech.

Once Rocky Lombardi's second touchdown pass in the final minute brought the Huskies to within one point, Hammock didn't hesitate to keep his offense on the field. The coach ordered a 2-point play for the win.

“Easy decision,” Hammock said. “We came here to win and we expected to win and that’s what we got done.”

Georgia Tech of the Atlantic Coast Conference was favored by 18 1/2 points over Northern Illinois, of the Mid-American Conference.

Northern Illinois led 14-0 but had a regroup after backup quarterback Jordan Yates, playing after Jeff Sims suffered an arm injury, rallied the Yellow Jackets with three unanswered touchdowns. Seeing his team rally but then lose in the final minute was a crushing start to Georgia Tech coach Geoff Collins' third season.

“Obviously, it hurts,” Collins said. “There’s a lot of guys in that locker room who are hurt.”

Lombardi, the Michigan State transfer, was given one final possession with 2:42 remaining. He made his debut for Northern Illinois (1-0) one to remember by directing the go-ahead drive that started with a 38-yard completion to Richie.

On the 2-point play, Lombardi rolled right before passing to Richie, whose leaping catch had to be reviewed. He landed with his hands outstretched and the ball took a small bounce as he hit the field. The replay indicated he kept his left hand under the ball, preventing the ball from hitting the field.

Gavin Stewart’s last-second, 60-yard field goal attempt for Georgia Tech (0-1) was blocked. The block triggered a celebration by North Illinois players, who bounced onto the field from the sideline.

Harrison Waylee, who rushed for 144 yards for Northern Illinois, fumbled when hit by Wesley Walker in the fourth quarter. Quez Jackson recovered to set up Georgia Tech’s go-ahead touchdown.

Northern Illinois linebacker Lance Deveaux Jr. picked up a Jordan Mason fumble and ran into the end zone for an apparent touchdown and 20-0 lead. A long review led to the touchdown call on the field being overturned because Mason’s knee was down before he lost the ball.

The reversal opened the way for Yates to lead a 16-play, 97-yard drive. Yates gained first downs on three third-down runs of nine yards or longer before completing a 22-yard pass to Kyric McGowan. It was Yates’ first career touchdown pass.

The Yellow Jackets were stopped at the Northern Illinois 2 early in the second half when a video review determined McGowan’s left foot was out of bounds on a 2-yard catch initially ruled a touchdown.

Dontae Smith’s 15-yard touchdown run on his first carry of the game tied the score with 7:44 remaining. Yates’ 53-yard pass to Malachi Carter set up the score.

Northern Illinois: Lombardi’s experience showed as he directed the Huskies’ run-first offense led by Waylee, who had a 35-yard touchdown run in the first quarter. The Huskies leaned on their physical offensive line. The low point came when safety Devin Lafayette suffered an apparent left leg injury late in the first half and was taken off the field in an ambulance.

Georgia Tech: The Yellow Jackets outgained the Huskies 429-301, including 273 yards rushing. Jahmyr Gibbs ran for 99 yards on 20 carries. Mason added 96 yards. Georgia Tech claimed a dominant 25-15 advantage in first downs. Ultimately, the Yellow Jackets were hurt by their inability to turn the yards into points.

Lombardi completed 11 of 17 passes for 136 yards and two touchdowns. “He’s a tough guy,” Hammock said. “He showed us what he’s about. He’s a leader. He’s a tremendous warrior on the field. He’s an extension of the coaches.”

Collins appeared to allow fans to influence a key decision when North Illinois led 14-7. He sent his offense back on the field for a fourth-and-goal play at the Northern Illinois 2 after fans booed when kicker Brent Cimaglia, who missed two field goal attempts in the first half, came onto the field.

The change set up the failed fourth-down play when McGowan was ruled out of bounds.

The lost points from a potential short field goal could have changed decisions in the final minute.

Northern Illinois: The Huskies will play Wyoming in their home opener next Saturday.

Georgia Tech: Kennesaw State, which opened with a 35-25 win over NAIA school Reinhardt University on Thursday, visits the Yellow Jackets next Saturday.