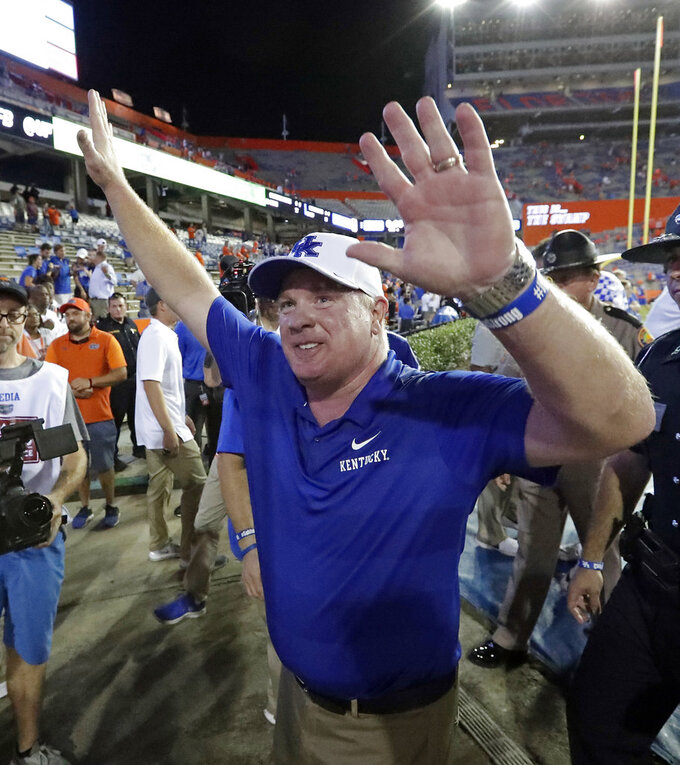 Under Nick Saban, the Alabama Crimson Tide always seems to start the season racking up wins.

The Georgia Bulldogs also seem to be starting that trend with Kirby Smart in charge.

But not everything is going according to plan in the Southeastern Conference.

LSU coach Ed Orgeron, the odds-on favorite to be the first SEC coach fired before the season, has his Tigers cruising as one of the league's last undefeated teams in October. And Kentucky, yes the SEC school best known for its basketball team, also is 5-0 along with Alabama, Georgia and LSU. The Wildcats are also enjoying their highest football ranking at No. 13 since 2007 .

"I was very confident in the team, just in what we were doing and our approach and the way we've been going about our business," Stoops said. "I knew we had some good players that were really working hard and focused, and good leadership. My thoughts weren't on (the) record. My thoughts were on the preparation on where we were at through the summer, and getting ready to go."

Even Alabama is winning in a way few could have predicted.

Making Tua Tagovailoa the Crimson Tide's starting quarterback after his walk-off touchdown pass last January to help Alabama win its fifth national championship under Saban has sparked Alabama's passing game. The Crimson Tide still can run all over opponents and smother them with defense. Now the Tide leads the nation scoring 54.2 points a game and Tagovailoa is the nation's top-rated passer with 14 TDs and no interceptions.

Both he and the Tide have been so good that the quarterback has thrown only 19 passes in the second half. He has yet to play in the fourth quarter of any of their first five games.

"He's been very, very efficient and played very, very well," Saban said. "I expect every player to play that way. But he's probably exceeded that to some degree, in terms of his consistency. Hopefully we'll be able to do the things we need to do to help him continue to play with that kind of consistency."

Orgeron certainly has been helped by having quarterback Joe Burrow, a transfer from Ohio State, running LSU's offense. Burrow said he heard all the predictions that the Tigers would go 6-6 this season.

"Coming from Ohio State, I know what talent is, and I knew coming in, people told me we didn't have a lot of talent on offense," Burrow said. "And I walk in in the summer and you see all these big, fast, strong guys, and I knew we had the capability to be something special. And then you see Coach (Steve Ensminger) E's offense I knew that we could do it."

Kentucky may have the SEC's biggest surprise not only this season but for the decades by handing Florida the Gators' first loss in the Swamp to Kentucky since 1979 and first in the annual series since 1986.

The league also has had some other unexpected issues:

— South Carolina's powerful offense behind quarterback Jake Bentley has fizzled along with the Gamecocks' hopes of challenging Georgia in the East.

— Similar struggles are ongoing at Mississippi State with quarterback Nick Fitzgerald . The Bulldogs may have padded their statistics against bad teams early in the season. Now they've managed just one TD in eight quarters against SEC competition.

— Hiring Chad Morris hasn't helped Arkansas at all with the Razorbacks stuck with the league's worst record at 1-4 .

Smart refuses to say whether second-ranked Georgia is where he expected at this point.

"It's extremely hypothetical because I don't think you can say where I thought they would be," Smart said. "We're a work in progress. We're a child trying to learn to walk and then run, then sprint. And we're not sprinting. I don't know if we're jogging yet. I don't know where we are on the continuum. But we have to improve."

Kentucky is coming off 7-6 seasons and bowl berths. Stoops also has a transfer at quarterback in Terry Wilson, who started his career at Oregon. But the Wildcats are winning with 2,000-yard rusher Benny Snell Jr. busting school records, a deep offensive line and a veteran defense led by linebacker Josh Allen who stuck around another year.

Now Stoops and his Wildcats have set their sights on much more — if they can avoid looking ahead to Nov. 3 when Georgia visits in a game that could decide the Eastern Division title. That's the same day LSU hosts Alabama in a Western Division showdown, if the Tigers can handle Georgia's visit on Oct. 13.

By then, it might not be surprising at all.