Mississippi State faces off vs Texas Tech in Liberty Bowl 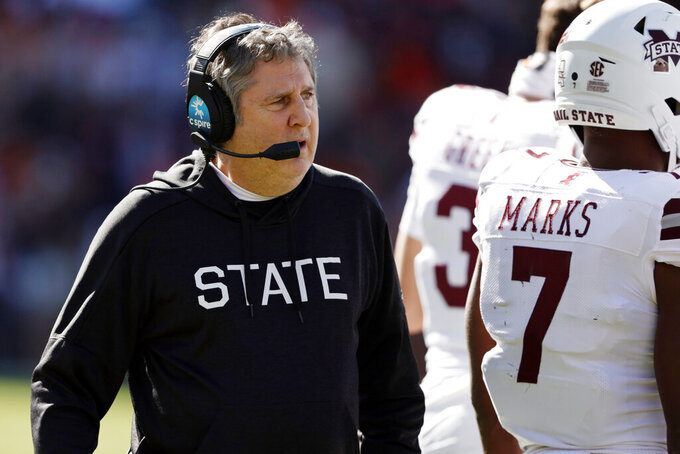 FILE - Mississippi State head coach Mike Leach talks with players during a timeout in the first half of an NCAA college football game against Auburn, Saturday, Nov. 13, 2021, in Auburn, Ala. (AP Photo/Butch Dill, File)

Line: Mississippi State by 10 1/2, according to FanDuel Sportsbook

Mississippi State can finish with eight wins for the first time since 2018, and coach Mike Leach could become the first Bulldogs coach to cap his first two seasons with bowl victories. He has a chance to do that in his first game ever against a program he once coached. Texas Tech can notch its first winning record since going 7-6 in 2015 despite a loss in the Texas Bowl. The Red Raiders have an interim coach in Sonny Cumbie who once played for Leach at Texas Tech.

Texas Tech: QB Donovan Smith. The freshman will be making his fourth career start in this bowl, becoming only the third freshman in school history and second in the Big 12 era to start a bowl game. He has completed 63.1% of his passes for 929 yards and six touchdowns with only two interceptions.

Mississippi State: WR Makai Polk. He has caught a school record 98 passes this season for 989 yards, and the junior has had four games with 100 yards or more receiving.

These programs last met in 1970 with Mississippi State beating Texas Tech 20-16 in Jackson, Mississippi. ... This is the 25th bowl all-time and 12th straight for Mississippi State. The Bulldogs are one of eight programs nationally and fourth from SEC to make a bowl each of the last 12 years along with Alabama, Georgia and Texas A&M. They beat Tulsa last year in the Armed Forces Bowl. ... Mississppi State coach Mike Leach has been to 18 bowls in 20 seasons, including seven straight, as a head coach and is 9-8 all-time. Leach won a school-record 84 games when coaching Texas Tech between 2000 and 2009. He took the Red Raiders to a bowl each season. ... Mississippi State ranks third in the SEC and 10th nationally allowing only 101.2 yards rushing. ... Texas Tech is playing in its 39th bowl and is 14-23-1 all-time. ... The Red Raiders have won nine of their last 13 bowl games but lost their last two, including the 2017 Birmingham Bowl. ... This is their first berth at the Liberty Bowl. ... Sonny Cumbie will wrap up his stint as Texas Tech's interim coach in this game and will move to his new job as Louisiana Tech's head coach. Cumbie is 1-3 since replacing Matt Wells. ... Joey McGuire was hired Nov. 8 as Texas Tech's next coach. ... Texas Tech LB Colin Schooler needs two solo tackles to move into the top five in NCAA FBS history. He has 307 solo tackles in his career.