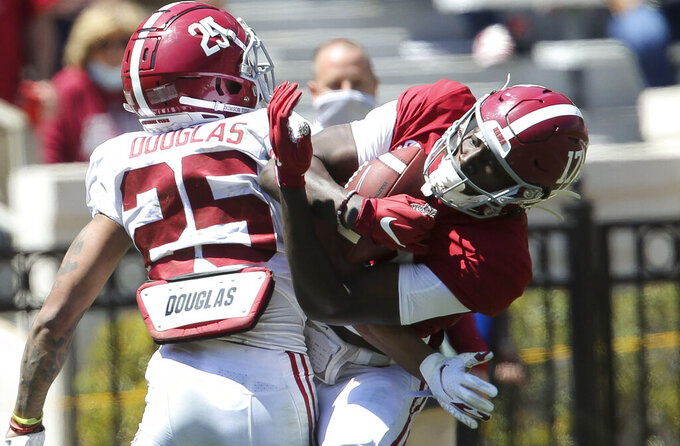 The top-ranked Crimson Tide, which could be called Wide Receiver U. with its recent run of talented wideouts, brought in four highly rated recruits and landed Ohio State transfer Jameson Williams.

They don't know if the additions have solved the problem, but there is extremene confidence in the group.

Alabama will rely heavily on some of those newcomers in the passing game starting with Saturday's matchup against No. 14 Miami in Atlanta.

There's plenty of talent but only Metchie has really established himself as a consistent threat, and he did it with DeVonta Smith demanding most of the attention from opposing defenses.

“We had a lot of super talented receivers come in and a lot of people who have made a really good impression on me, the rest of the team and the coaching staff,” said quarterback Bryce Young, also a newbie; the sophomore is set to make his first start. "You can tell when they came in they were guys that were really experienced at the high school level.

“You can tell how they came in, they came with a lot of talent, they made a lot of plays early. We’re all super excited about the young group of receivers.”

Alabama has had four receivers picked in the first round of the NFL draft over the past two years, including the 2020 Heisman Trophy winner Smith. Jaylen Waddle joined him in the latest draft, a year after Jerry Jeudy and Henry Ruggs were also first-rounders.

Everyone is waiting to see which young receivers emerge from the fray starting Saturday, but coach Nick Saban said developing consistency is a big part of the process.

“I think sometimes they’re not sure what they’re doing so they’re not playing fast, sometimes they get impatient and cut things short,” Saban said. “But they also have shown that they have a lot of upside in terms of their ability to make a really positive contribution to the team so it’s going to be a little bit of a work in progress.”

Metchie became Alabama's No. 2 receiving threat last season when Waddle went down with an injury. But he was a distant No. 2 behind Smith, who shattered Tide records with 117 catches for 1,856 yards and 23 touchdowns.

The speedy Ohio State transfer Williams is set to start the opener. Saban also brought in four of the top 10 receiver prospects from the high school ranks, according to the 247Sports composite rankings, led by No. 2-rated JaCorey Brooks.

Fellow freshman JoJo Earle is listed on the initial depth chart as a potential starter, vying with returnee Slade Bolden; Saban said Earle had “a really good camp." Agiye Hall, who was a star of the spring game, and Christian Leary are also vying for early playing time.

The bar has been set high over the past 11 years starting with Julio Jones and continuing with the likes of Amari Cooper and Calvin Ridley. Alabama has produced seven first-round draft picks at receiver during that span, plus tight end O.J. Howard.

With Metchie leading the way, the current group is hoping to continue that trend. He's relishing the role of leader.