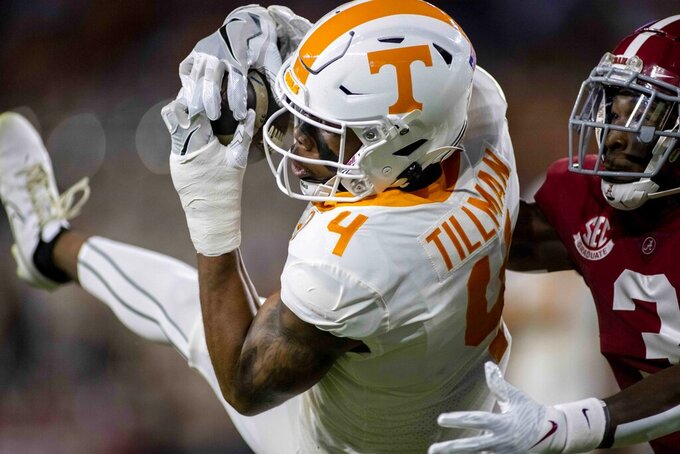 Tennessee wide receiver Cedric Tillman (4) grabs a pass as Alabama defensive back Daniel Wright (3) defends during the first half of an NCAA college football game Saturday, Oct. 23, 2021, in Tuscaloosa, Ala. (AP Photo/Vasha Hunt) 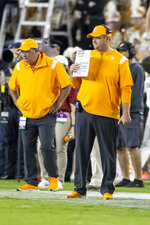 LEXINGTON, Ky. (AP) — Either No. 18 Kentucky or Tennessee will end a two-game losing streak when they meet this weekend.

Kentucky (6-2, 4-2 Southeastern Conference) might have more reason for concern following defeats at top-ranked Georgia and unranked Mississippi State. The loss to MSU followed a bye week for the Wildcats. One bright spot the Wildcats is that Saturday night’s matchup of border rivals is at Kentucky, where they’re 5-0 this season.

Mississippi State was “more physical than us, and that can’t happen,” coach Mark Stoops said. “They seemed to be more motivated at times, certainly more physical at times, executed better. You name it, they outplayed us and it’s up to us to get back to being who we are.”

Kentucky’s offense has stalled the past two weeks, averaging just 229 yards. Ball protection might be the bigger issue for the Wildcats after committing four turnovers last Saturday in Starkville, two of which MSU converted into third-quarter touchdowns that broke the game open.

That needs to be corrected against Tennessee (4-4, 2-3), which is an opportunistic plus-8 in turnover margin the past six games. The Volunteers look to avoid consecutive series losses for the first time since 1976-77 and fall below .500 for the first time this season.

They had a week off to recharge from an eight-game stretch capped by consecutive defeats to then- No. 13 Mississippi (31-26) and No. 4 Alabama (52-24). Tennessee hopes that will help navigate a challenging stretch run that begins with Kentucky and then Georgia.

“Everybody remembers what you do in November right?” Vols tight end Jacob Warren said. “We lose a game here, lose a game there, win one here but it is all going to come down to these last four games. ... That whole thing is driving us to keep getting better and try to keep pushing through the season.”

Kentucky quarterback Will Levis needs a reboot after throwing three interceptions last week at MSU. The Penn State transfer still has more TDs (14) than picks (nine), but Stoops stressed the need for more patience after arguably his worst game this season.

“I think you see a lot of quarterbacks doing that at times and maybe regroup during (the) game,” he said. “Will had a chance to hit a few strikes, complete a few passes to possibly hit a touchdown or two and we missed them. So, we have to get that fixed.”

Tennessee brings in an uptempo offense averaging nearly three plays per minute to lead the nation. The Vols have started notably fast, outscoring opponents 124-30 in the first quarter. While the Wildcats will try to slow Tennessee down, they must also to pick up the offensive pace after holding the ball for just 18:50 last week.

“Obviously, when you turn it over, you don’t hold it as long as you’d like to," Kentucky offensive coordinator Liam Coen said. "But that’s something we’re definitely challenged with this week.”

Kentucky’s ground game has generated just 117 combined yards the past two games, including 66 at Mississippi State. The Wildcats are averaging 175.2 per game, down from 214.2 entering the Georgia game. Chris Rodriguez Jr. ranks second among SEC rushers (809 yards) but has just 41 yards on 15 carries in that span and fumbled after running into his own lineman last week. Stoops acknowledged the junior wasn’t at full strength but said that’s no excuse for his struggles.

Tennessee leads the nation in tackles for loss at 8.75 per game. Linebacker Jeremy Banks (4.5 sacks) leads 15 players with multiple TFL while 25 overall have at least 0.5 TFL.

“We want to be aggressive, whether we are in our four-down, three-down, depending on what coverage we’re in,” Vols defensive coordinator Tim Banks said. “Credit to the kids, they’re playing extremely hard and making a ton of plays.”

Hendon Hooker wasn’t coach Josh Heupel’s first choice to be the starting QB, but the graduate transfer from Virginia Tech has taken over the job. Hooker is 3-3 as a starter and has thrown 15 TD passes with only one interception in that span. He has 1,752 yards of total offense in six games and is completing 68% of his passes. Hooker is coming off a season-high 282 yards passing and three TDs in the loss to Alabama.