No dominant ACC team equals nailbiters all around 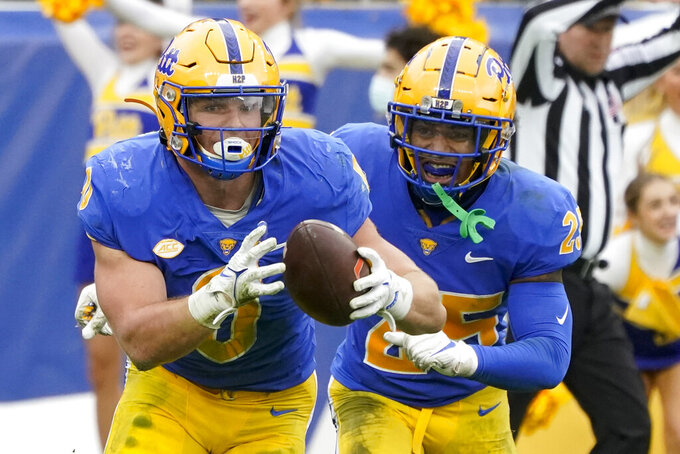 Pittsburgh linebacker John Petrishen (0) celebrates with defensive back A.J. Woods (25) after making an interception against Miami during the second half of an NCAA college football game, Saturday, Oct. 30, 2021, in Pittsburgh. Miami won 38-34. (AP Photo/Keith Srakocic)

It seems parity has arrived in the Atlantic Coast Conference — just look no further than the results on the scoreboards.

Nailbiters have become commonplace with Clemson in a down year and no truly dominant team. Even unbeaten Wake Forest has had its moments.

The fall of Clemson (5-3, 4-2) has been the biggest surprise. The Tigers, who started 2021 with a 10-3 loss to current No. 1 Georgia, entered the season with just seven losses in six years. They still have a staunch defense that has allowed them to prevail in close games — four ACC wins by a combined 25 points — but an underperforming offense that's averaging just 21.3 points, the worst in the conference.

“Yeah, on any given day, somebody can be the best team that day," Syracuse defensive lineman Cody Roscoe said. "There’s no powerhouse, no key team that’s just beating up on everybody. Everybody’s on an even playing field, so whoever prepares best that week and comes to play the hardest that day is going to be the winner.”

Syracuse (5-4, 2-3) finally snapped a string of five straight games decided by five points or fewer when it broke open a tight game against Boston College last Saturday with a 21-point surge in the third quarter after the Eagles led 3-0 at halftime. That five-game Orange streak included three straight conference losses by three points and three straight games decided on the final play. One of the setbacks was to the Demon Deacons — 40-37 in overtime.

“We know every game's going to be a dogfight," Roscoe said. “Honestly, I feel like that with the ACC right now a lot of things are evening out. Everybody’s good every day. Every game is a competitive game.”

“I would say parity," Virginia Tech coach Justin Fuente said. "I just know we all have our issuess, basically. If you go look at teams across our league, there’s strengths with all of them and there’s weaknesses with all of them. So I think there’s different matchup issues that rear its head from week to week that maybe cause some unexpected results, and there’s certain strengths that maybe overpower those weaknesses. I just don’t know that there’s anybody that’s a lot better than everyone else.”

Pittsburgh found that out on Saturday at home against Miami. The high-scoring Panthers were 6-1 and ranked No. 17, unbeaten in three conference games, and atop the Coastal Division. They’re still tops in the division, but they lost 34-30 to the Hurricanes and fell out of the Top 25. And Pitt coach Pat Narduzzi thought that 44-41 home loss to Western Michigan in mid-September was a faded memory that wouldn’t repeat itself.

“Anybody can win any given Saturday,” Narduzzi said. “Sometimes you’ve got to get punched in the mouth. It’s called adversity. We got punched.”

Louisville also has experienced way too many close finishes to its liking. The Cardinals went 2-2 during a midseason stretch with three decided in the final minute. The last two were heartbreakers: they rallied to tie Wake Forest before falling 37-34 on a late field goal, then allowed Virginia to score a touchdown on its final drive in a 34-33 defeat.

Though it demonstrates the league’s parity in a sense, third-year coach Scott Satterfield is stressing the need to finish close games that have become a pattern for his team.

“We were right there against some really good teams," he said this week. "That is how close we are and we have to find a way to get over the hump and win these games.”

North Carolina coach Mack Brown says he’s been talking to other coaches about all the nailbiters. He figures one reason might be that locker rooms are just too much in flux.

“The transfer portal is changing the locker room,” Brown said. “We thought name, image and likeness (NIL) would do it, and maybe it is. But I think more it’s the transfer portal because teams aren’t as close and you’re seeing up-and-down teams. You’re seeing more teams that will play great one week because they’re hot and going. But when they get in a tight situation, they’re not playing as well. And I have to think that that has something to do with guys coming in from outside.”